Rissho Kosei-kai (RK) is a non-monastic Buddhist movement whose primary scripture is the Lotus Sutra, which is considered the foremost Buddhist scripture.

Members of RK strive to live the teachings of the Lotus Sutra in our daily lives – within our families, workplaces and communities. With headquarters in Tokyo, RK now has over two million member households in over 300 Buddhist Centres throughout the world.

“Rissho” means placing the teaching of the true Dharma in our hearts and minds. “Kosei” means aspiring to exceed the person we are today by connecting with all of the people in our lives, learning together and inspiring one another. “Kai” means society or organisation. We join hands with the followers of all faiths and none, and people from all walks of life to take part in peace activities at home and around the world.

Two of the main characteristics of our movement are the following:

To learn more about our practices, please read here.

The Gohonzon — our focus of devotion

RK members revere the Gohonzon, our focus of devotion, as the manifestation of the Eternal Buddha Shakyamuni—Great Benevolent Teacher, World-Honoured One.

The Gohonzon is the integrated figure of the historical Buddha Shakyamuni, who appeared on earth and taught the Dharma around 2, 500 years ago, and the Eternal Original Buddha, as described in chapter 16 of the Lotus Sutra: the Life span of the Eternal Tathagata.

Through paying homage, chanting o-daimoku or reciting the sutra before the Buddha enshrined in our altar, we aim to become people who can humbly revere and dedicate ourselves to the Buddha, which is essential to cultivating our hearts and minds. These are not just repetitive formalities. It takes time and effort to understand the Buddha’s teaching and continually live our lives following his wisdom.

Taking refuge in the Gohonzon means that we accept and keep as our own the Buddha’s wish to liberate all people from suffering and that we will diligently walk the Buddha’s path.

To learn about the Gohonzon, please read here.

The Sutra of the Lotus Flower of the Wondrous Dharma, popularly known as the Lotus Sutra, is revered by millions of Buddhists as containing the core and culmination of the Buddha’s teaching. Together with the two shorter sutras that traditionally accompany it, Innumerable Meanings and the Method for Contemplating the Bodhisattva Universal Sage, it is one of the most important scriptures of Mahayana Buddhism and one of the major documents of world religion.

The Lotus Sutra consists of a series of sermons delivered by the Buddha before a great multitude of disciples and countless others toward the end of his 45-year teaching ministry. The setting and scope are cosmic, but the sermons themselves, presented in both prose and verse, are replete with parables and graphic anecdotes.

At the heart of the sutra are three major concepts of Mahayana Buddhism:

The Sutra of Innumerable Meanings records the sermon proclaimed by the Buddha to a host of bodhisattvas immediately before the delivery of the Lotus Sutra. Traditionally known as the “opening sutra” it is a shorter scripture. The Sutra of the Method for Contemplating the Bodhisattva Universal Sage, said to have been delivered after the Lotus Sutra, establishes acknowledgement and remorse as the primary way to practise the spirit of the Lotus Sutra. As an epilogue to the main scripture, it is called the “closing sutra”.

The Lotus Sutra, along with the opening and closing sutras, is traditionally called the Threefold Lotus Sutra. For RK members it is the number one scripture that defines our faith. Throughout the Lotus Sutra, the spirit of the One Vehicle is manifested (a spirit of inclusiveness, which means that all people in the world are liberated and can live together). And so the Lotus Sutra can lead all humanity from division to unity, from discord to harmony, and from conflict to peace. 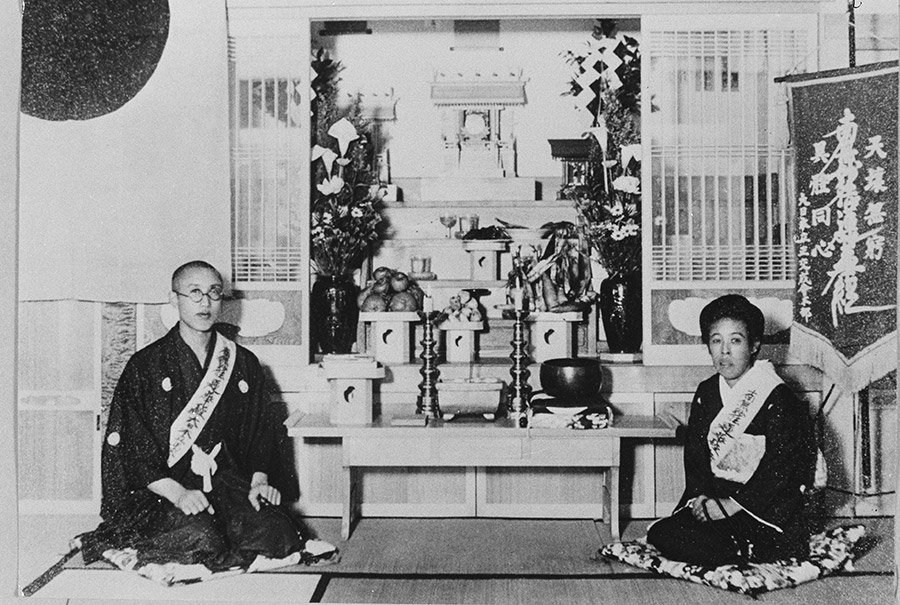 The Lotus Sutra appeared to be difficult and was only studied by a limited number of people and by religious scholars. RK Founder Nikkyo Niwano (1906-1999) had a wish that the Lotus Sutra would be appreciated and understood by all people and it would permeate people’s daily lives.

On 5 March 1938, together with the co-founder and 30 other people, Rev Niwano started RK out of his earnest desire to truly liberate people from suffering and change the world for the better. For over 60 years, the founder has communicated the teachings in a clear way that led people to an altruistic way of life and inner peace.

Wishing for world peace, he paved the way for interreligious cooperation so that different religions could join together in dialogue and action. He dedicated himself to the establishment of Religions for Peace (RfP, formerly the World Conference of Religions for Peace) and presided at the opening session of its Sixth World Assembly with Pope John Paul II in the Vatican’s Synod Hall. In the past three United Nations Special Sessions on Disarmament (SSD), he called for world political leaders to take steps for the abolition of nuclear weapons. In 1979 he was awarded the Templeton Foundation Prize for Progress in Religion. In 1992 he was made Knight Commander with the Silver Star of the Order of St. Gregory the Great by the Vatican. In 1993 he received the Interfaith Medallion from the International Council of Christians and Jews.

Co-founder Myoko Naganuma (1889-1957) practised the teaching of the Lotus Sutra and dedicated herself as a witness to the Lotus Sutra under the guidance of the founder. Even in the chaotic turmoil during and after World War II, Co-founder Naganuma led a life dedicated to always practising the teachings of the Lotus Sutra thoroughly, so demonstrating the importance of rendering service to others through the bodhisattva way, no matter what circumstances you are facing. The deep compassion she demonstrated in her attitudes and behaviour were a great inspiration for RK’s founding members and helped them develop firm faith in their hearts and minds.

Meeting together as a Sangha (community)

Rissho Kosei-kai is a Sangha (community) composed of ordinary men, women and children who have faith in the Buddha and strive to enrich their spirituality by applying his teachings in their daily lives.

Sangha historically in India means association, company or community. By the time Vinaya (the rules that governed Buddha Shakyamuni’s religious communities) were established, it referred to the Buddhist community.

The purpose of Sangha (composed of monks) in early Buddhism was to maintain the ideal environment in agreement with Buddha’s teachings for individuals to attain enlightenment or make efforts to do so. Buddhist Sangha was also called “Sangha in harmonious order”, realising peace within the community with the Sangha settling disputes. However, in the Mahayana tradition, people referred to the traditional disciples who renounced home life as “shravakas”, while their whole communities, including both monks and laypeople, were called bodhisattvas – where there was no distinction and the whole community was seen as the Sangha.

Today, we live in an individualistic and materialistic age. Of course, promoting individuals’ welfare and showing their potential is human nature as well as a very important thing to make our society liveable. If our way of thinking is rooted only in society and nation, the individual dignity of human beings may be violated as we have experienced in totalitarian regimes. However, setting our ultimate goal only in individual benefits and happiness will lead to further conflict to take others’ profit and maximise one’s own – as reflected today. We should aim for the progress and welfare of the entire society at the same time as focusing on individual growth and potential.

So, what form of society is the most ideal? One that represents great diversity, Sangha members had the same goal of attaining the supreme wisdom of Buddha to benefit all people, and members developed mutual bonds through friendly competition. Advocating this as an ideal model of community, we now have to fulfil our potential and work towards perfecting ourselves to make our society better.

RK is a Sangha for today respecting the spirit of Shakyamuni’s Sangha. It is spoken of in the Members’ Vow: In the spirit of lay Buddhists, we vow to perfect ourselves through personal discipline and leading others, and by improving our knowledge and practice of the faith.

It is not only for the sake of members’ awakening. Its ultimate goal is the happiness and peace of all humanity as expressed in the members’ vow: And we pledge ourselves to follow the bodhisattva way, to bring peace to our families, communities and countries, and to the world.

To this present day, we continue to advance our Sangha as a form of the ideal society, gradually extending it universally and with the end goal of liberation for people all over the world – known as the Sangha in Four Directions, which can be interpreted as a universal friendship for the whole world.