Spiritual training that has changed my life

This Dharma Journey talk by Rev Laura Meya was presented at the ceremony of
the monthly memorial day for Founder Nikkyo Niwano held in the Great Sacred Hall on 4 March 2019. 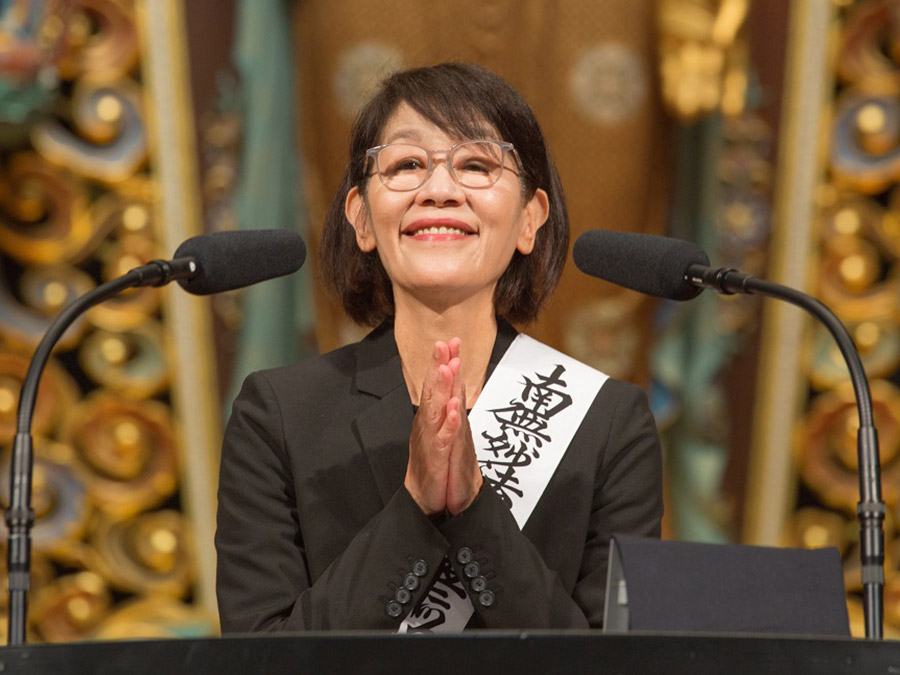 My name is Laura Meya and I was born in Japan as the oldest daughter. I come from a very diverse family—my father is Filipino and my mother is Japanese. My mother became a member of Rissho Kosei-kai when I was still in her stomach. My father was a seaman who was employed by the military. He was deployed to many places, and he returned home to Japan about once or twice a year.

My first memory of my childhood is when I was two years old. I am taking my one-year-old sister out of her crib and jumping out of a big window. When I turn back to look through the window, my father is holding a gun trying to kill my mother. He always smelled of alcohol and my parents would always have big fights. During that time I would run away, barefoot, to my next door neighbours’ house for help.

I entered a Japanese kindergarten. At first, many children bullied me because of my American name. But soon I was able to have many friends. When I was entering first grade, I was unable to go to the Japanese elementary school due to being American, and I had to go to an American school. I was bullied because I only spoke Japanese and did not understand English. However, after a week, I had many friends, and they helped me learn English.

This situation was very hard to accept. I felt I had so many lives to live. As an elementary student, I wondered whether I was American or Japanese. I wondered what would happen if my parents divorced—would I go with my mother or my father? Why did I have these kinds of parents? So many questions, and no answers.

Due to my father’s retirement, our family moved to Hawaii when I was 17. This was the very first time my father truly lived with us—I had never lived with my father for a long period of time before that. It was strange, and very uncomfortable and uneasy.

I left home at 18. When I was 20, I went to the Hawaii Buddhist Centre by myself. I sincerely wanted to return to Japan. My life was not how I wanted it to be, and I needed advice on how I could return to Japan.

This was when I met Reverend Nobukazu Masuda. He welcomed me warmly, and somehow I felt very much at ease in his presence. I was able to open up immediately and confide in him. He listened, and even though he did not give any guidance toward my problem, strangely, my sorrows were lessened. At that first meeting, Reverend Masuda handed me a book. He asked me to read each chapter daily and come to the Buddhist Centre after I read each chapter. The book was Buddhism for Today, written by Founder Nikkyo Niwano. I read each chapter with excitement, and each day I went to the Buddhist Centre to discuss the contents of the book. I truly enjoyed these sessions. Reverend Masuda taught me that “life is suffering”, and because of the suffering, we are able to stop, think, and improve ourselves. After the last session, I continued coming to the Buddhist Centre to learn more. I remember my heart was pounding with excitement.

My Buddhist Centre’s practice was done together with a district leader, Mrs Kyoko Kaku. Together with her, I sat in Hoza daily and listened to everyone’s stories. Life was full of suffering. Through the Hoza sessions, I discovered that we need to change ourselves and our views of things in order to realise the cause of the problem.

The cause of the problem was me. I wanted to learn how to view things differently, and I absorbed all the guidance of the members as if it was my own. Through Hoza, I realised that when I changed my views, the negative situation seemed to become a positive one. I discovered that I alone did not carry problems. Hoza guidance was an eye-opener. I learned that it is very difficult to change others, but that we can change our own view of things easily if we try.

After about six months, I began the practices of enhancing members’ connection with the Dharma (tedori). Mrs Kaku and I visited many homes. Some people were nice to us and others were not. Some of the people served us good tea; others served us tea in a dirty cup. Whatever the situation, Mrs Kaku told me to drink the tea with a smile and gratitude. As this practice continued, I realised how important it is to accept the situation as is with gratitude. I realised I had a habit of judging situations as good or bad, and that the tedori practice was good for me.

Mrs Kaku told me, “What happened yesterday is okay, but what you do today is important”. I really liked this thought. I wanted to make “today” special. I wanted to make sure I did a good thing today. She also said, “Laura, you are able to do everything and anything. So from today, we are going to do spiritual training”. Those last few words caught my attention. What is spiritual training? My daily practice at the Buddhist Centre was “practice”. The actions were almost the same each day, but my spirit was different each day. To realise and understand my spirit was always surprising. I realised I was always looking at actions and words of others and did not include myself. I saw that I was blaming others for my unhappiness. I learned that I am the only one who can make myself happy.

I would like to thank the Hawaii Buddhist Centrer’s Sangha for helping and supporting me through many of the turmoil and challenges I had with my oldest son. I learned to become a mother and improve myself. This was also the time whenI learned to accept my parents as they are. I realised that I was giving my parents a very hard time—I wanted to change them to become better, but in reality, my parents were trying very hard to become good spouses, my father was trying hard to provide for his family, and my mother was trying to keep the family together. Everyone was trying hard for the family. I thank them for not letting me go and for giving me life, raising me, and connecting me to the Dharma.

And most of all, I thank the Buddha and the Founder. Praying to the Buddha gave me courage to accept the situation and move forward. The Buddha gave me the vision to see my inner strength. The strength to not run away or blame others, but to accept and raise myself above the problem.

Currently, I have received a duty from President Niwano as the minister of Hawaii Buddhist Centre. The Sangha is full of the spirit of “aloha”, a Hawaiian greeting that means love, peace, and compassion; a gentle heart to accept everything warmly as it is and stay close to others compassionately with big love and kindness. Members of the Buddhist Centre are very welcoming, and one can almost always hear laughter and children running around.

The Sangha consists of roughly half English speakers and half Japanese speakers. The Buddhist Centre has many groups led by members. We read and practice the President’s monthly guidance, which usually becomes the topic for study sessions. Activities include tedori and michibiki practice and ancestor-appreciation services. Many English-speaking members hold monthly appreciation services. Daily prayer recitation at home is now a big part of the men’s group. They have also begun a monthly evening prayer recitation at the Buddhist Centre.

Family education sessions are held monthly for English– and Japanese-speaking mothers. Though cultures and languages differ, the love of a parent is universal. Through this education, many are learning about themselves and also about their own parents. Both mothers and fathers participate in the sessions, which have helped them become more relaxed and flexible to the needs of their children. Growth of children differ, and they do not need to be the same. Parents are learning that their relationship with the child begins at home. I sincerely believe that family education plays an important part in helping American families.

Hawaii is known as a “melting pot” ofdifferent cultures, backgrounds, and languages. However, by accepting our differences, we are able to overcome the challenges we face. I realise that the founding leaders of Hawaii Buddhist Centre had very deep faith in the Dharma and the Founder to spread the teaching in Hawaii. The faith is now being transferred to the fifth generation.

Just as I was helped during the difficult time with my oldest son, I also began helping my friend with her relationship with her daughter. It is a terrible feeling to see your own daughter rebel against you. Through Rissho Kosei-kai’s practice, she and I learned to grasp and accept the daughter’s feelings. We practised together to view things differently based on the Buddha’s wisdom. After a couple of months, my friend was able to understand her daughter’s true feeling: she wished for her mother’s attention. When my friend realised this, everything changed, and it was the beginning of their new chapter. My friend, who is supportive and encouraging, now guides others to the teaching. I will continue to practise the Dharma with an attitude of “firstly, for others”.

The Hawaii Buddhist Centre will be celebrating its 60th anniversary this month. We will not forget the challenges and difficulties of our foreleaders, and, together with the Hawaii Sangha, we vow to move forward to our 61 year with compassion and a renewed spirit.

Rissho Kosei-kai of Hawaii celebrated its 60th anniversary at its Buddhist Centre in Pearl City on 31 March.