The power to live that I found through sutra recitation

On 27 July, Rissho Kosei-kai celebrated the 60th anniversary of Dharma dissemination in the United States by holding a commemorative event in Las Vegas. During the convention, four members presented a combined Dharma Journey talk using the title “Satori Story”. 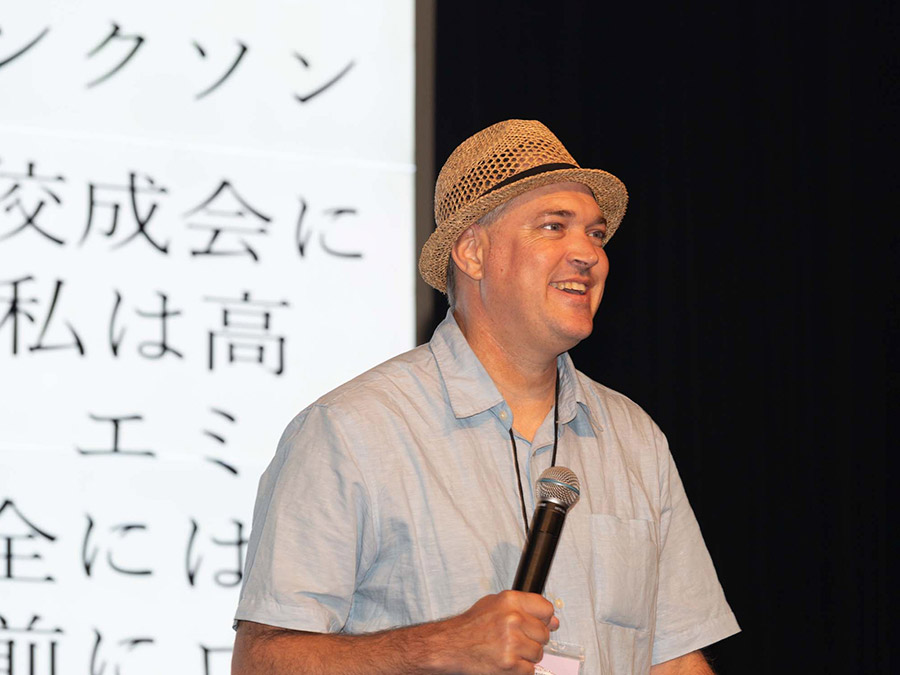 My satori story begins with my wife, Emi, who brought me to Rissho Kosei-kai 15 years ago. Though I read Siddhartha, a novel by Herman Hesse, in high school, I didn’t really come to understand Buddhism fully until the last several years with Emi. Moreover, even though Emi and I were married at the Los Angeles Buddhist Centre 10 years ago by Rev Toshiyuki Kodaka, who was then the minister of the Buddhist centre, and both of our children received baby blessings when they were born in 2009 and 2014, it was not until an accident happened at work five years ago that I started chanting the Lotus Sutra daily.

A tragic accident happened at my workplace where someone died, and this left me with trauma and insomnia. I was not at fault or responsible, but I was there when it happened, and the entire series of events played over and over in my mind. I started to question my entire life and who I was up until that point.

I was paranoid and haunted for weeks and weeks; my mind was like a foolish monkey. I was drowning in my insecurities, examining my entire life with a microscope. I had just turned 40. My son had just been born and I had finished my master’s degree just before the accident. I hit rock bottom. I had never been so low. I had been planning to find a new job, but first I had to collect myself.

I was in a dark place and did not know what to do. I spoke to Rev Takayuki Yoshizawa, a former minister of the Buddhist centre, in July of 2014, and he told me to recite the entire Kyoten (sutra readings) every morning for 30 days straight. I did what he said and immediately began to feel better. Day by day I started to feel more centred. I was rebuilding myself.

Passages jumped out at me, such as, “All wrongs are just as frost and dew, / So the sun of wisdom can melt them away. / Therefore, with utmost sincerity, / Perform acknowledgement and remorse for the six sense faculties”. I was doing my best to cleanse my six sense faculties and the recitations were my refuge. These passages started to transform my thinking.

Day by day I began to rebuild myself. After thirty days, I decided to continue this daily practice.

I continue to recite the entire book every day, and it has been five years now. Besides reciting the sutras daily, I started going to our Buddhist centre every Sunday. Prior to this I would only attend every few months.

A few months after I started chanting daily, I applied for jobs and was turned down for seven in a row. I didn’t know what to do next, so I continued with my recitations and I started visiting old friends and guest speaking at schools I had worked at previously. One day out of the blue, one of those schools offered me a job that I did not even apply for. I ended up teaching there and got my professional career back on track.

The world we live in has never been so challenging, and without a strong worldview and some structured practice, we are all vulnerable to the tempest. Buddhism helps transform any situation into a point of growth.

Chanting my daily recitations has helped me become a more complete person. I am truly thankful to Rissho Kosei-kai for teaching me the Buddhist practice. I would like to express my gratitude to Founder Nikkyo Niwano.

The daily sutra recitations have really improved my concentration. I have become much more patient. I have learned that all things are impermanent and that it’s important to cherish each moment.

Five years ago, Emi told me to deepen my faith. Through my daily practice and efforts to evolve, this is exactly what happened.

Rissho Kosei-kai and Buddhism have given me a structure to survive and thrive in order to support Emi, our kids, Skye and Eka, and also my students. As much as I have always had good intentions, Buddhism is what empowered me by providing a more effective means of actualising my objectives.

Last year, we went to Japan to get our Gohonzon, the focus of devotion, with Rev Hiroyasu Hosoyama, the present minister of the Buddhist centre. This event further solidified my faith.

Emi now works with Rissho Kosei-kai International of North America. I am being promoted at the university I teach at and I have hosted a poetry event at the Los Angeles Buddhist Centre for the last year and a half. This event includes poets from across the city who share their poems aloud to the audience. Some of the poets are Buddhist, but many are just thoughtful writers I know from the area. It is always an inspiring event. I have been hosting poetry events for 20 years across Southern California, but the one I host at Rissho Kosei-kai is my favourite because the space brings out the best in all the participants. My friends from across Los Angeles love our Busshir centre.

Thank you, Rissho Kosei-kai and Emi, for equipping me with this beautiful practice. It is the Buddha’s arrangement, and I will continue to share the Dharma everywhere I go. There is still so much to learn and there are many days where I still feel like a baby just beginning to make sense of the world, but I have more faith and confidence now because I have a practice to rely on to transform any situation. For this I am deeply thankful.