The happiness I found through following the Way 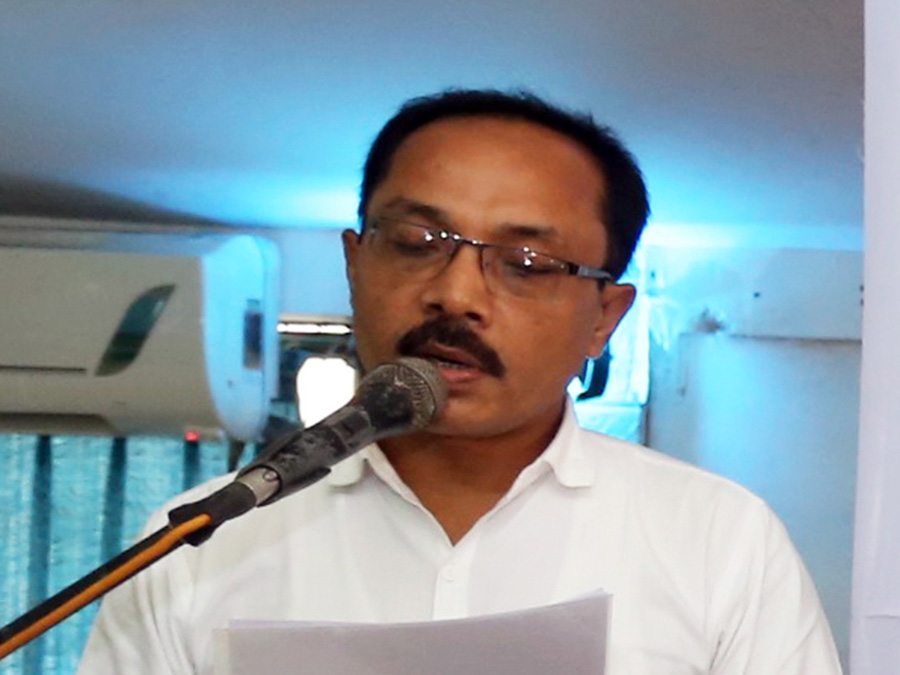 My name is Dulal Barua. I have a family of four—my wife, Lili, our two daughters, and myself. I serve as the head of the Ram chapter in Cox’s Bazar.

Before I encountered Rissho Kosei-kai, I worked as a corporate employee and also participated in social-welfare activities. I began to lose my health suddenly and became barely able to walk. Since I had to stay in bed every day, I couldn’t continue to work. Medical treatment cost me heavily, and before long I found myself in debt. I was driven into a nervous breakdown and began to lose spiritual strength. I felt miserable about myself and found it hard to even talk to people. Day to day, I suffered physically, spiritually, and financially.

During that time, I met Mr Shunil Barua. He brought a leader of Rissho Kosei-kai to visit me. From that day forward, he continued supporting me spiritually and taught me a lot of things about Rissho Kosei-kai. While I was learning the teaching of Founder Nikkyo Niwano, I felt changes begin to take place within myself and my mind became lighter.

Thanks to Mr Barua’s help, I was able to find a solution to my many problems, and I became capable of speaking to others again. My physical strength also began to return. I started to visit the Ram chapter and participate in sutra recitation. While practising the teachings, I realised that my mind was changing for the better, and a light of happiness came into view. It was during this time that Mr Barua invited me to become a formal member of Rissho Kosei-kai. Since I knew that Rissho Kosei-kai had taught me the right way of living, and I already practised the teaching and realised its value, I didn’t hesitate to join the organisation.

Soon after I became a member of Rissho Kosei-kai, I started to participate in the men’s group. My life changed drastically by learning the teaching, which surprised my neighbours. I began sharing the teaching with friends and acquaintances in the neighbourhood. With the help of the leaders of the Ram chapter, I have guided more than fifty people to Rissho Kosei-kai. My family was also impressed by the teachings, and they participate in the activities with me now.

On 2 May 2014, I was appointed an area leader of the Ram chapter. On the same day, I learned that I would be able to participate in the Advanced Lotus Sutra Seminar in Bangkok. In the seminar, I studied the importance of putting others first and feeling the suffering of others as our own. Until then, I had seldom thought of helping or encouraging others, but thanks to the seminar I realised the importance of having such a mindset. Since then I have strived to put into practice what I learned in Bangkok and share it with as many people as possible.

On 17 June 2016, I received the Gohonzon (our focus of devotion: a statue of the Eternal Buddha Shakyamuni), and on 23 October of the same year, I received my qualification as a Dharma teacher, both at the headquarters in Tokyo. While I was in Japan, I joined other members of the centre to visit the homes of both members and nonmembers to share the Dharma as part of the Dharma dissemination practice. It was an important experience for me. On 1 April of the following year, I was appointed as head of the Ram chapter.

As a chapter head, I have met many people, hoping that they would be connected to the Buddha. I hope to help people who are suffering by putting my experience and learning to use. I believe that the leader’s role is to get close to people with compassion and lead them to happiness. I was told that my role as a chapter head is an assignment from the Buddha. With the awareness that I am a messenger of the Buddha, I am applying myself to share the teaching with many more people.

Here, I would like to express my gratitude for Rev Aritomi, whom I respect from the bottom of my heart. I was deeply impressed by his sincere attitude to the faith and was moved to tears many times by his devoted practice of the teaching. He has been making great efforts for the happiness of the members in Bangladesh. Thanks to Rev Aritomi, my life has changed completely.

Looking back at my life since I joined RisshoKosei-kai, I see that the more I practised the teachings, the happier I became. Through this practice, my attitude toward life has changed, and people around me have told me that I have changed very much and I am kinder than before. Now, when I see people who are suffering, I am concerned about them more deeply than before, and I think about how I might help them get out of the suffering. Also, when I see someone who is joyful, I can feel their joy as my own. Until I encountered Rissho Kosei-kai, I had never experienced such feelings. By practising the teaching every day, I think compassion began to grow within me before I even recognized it.

Practising the Way may be likened to mountaineering. Before climbing a high mountain, one may feel anxious, wondering if they can safely reach the summit or if their guide is proficient enough to lead them on the correct path. The fact that I am able to present a Dharma Journey talk today, on the 20th anniversary of RisshoKosei-kai of Bangladesh, represents an important step in my life as a Rissho Kosei-kai member, which I think can also be likened to mountain climbing.

Looking back on the trail I have walked until now, I think I have come halfway up the mountain path leading to the summit. Soon after I joined Rissho Kosei-kai, I was anxious if I could keep my faith for the rest of my life. The way of the faith, like mountain climbing, is not free of difficulties, but I have been able to keep walking until now. I was even appointed to an important role as chapter head and had an opportunity to participate in the overseas leaders’ training program at the headquarters. These experiences have been invaluable treasures in my life, but I am still only halfway there, and a long path extends in front of me toward the summit.

I am not certain when I will reach the summit of my life of the faith, but when I reflect on the way I have come, I see that while earnestly practising the Way, I have received a lot of happiness unknowingly. Furthermore, like the landscape on the mountain path suddenly opens up before your eyes when you reach a certain height, thanks to the merits I have received from my continued practice, my way of looking at things has changed and my worldview has broadened.

The more earnestly we strive to practice the Dharma, the more merits we are able to receive. On the other hand, when we think we have done something on our own, arrogance will arise in our minds at once. Arrogance brings about suffering. Studying the teachings enables us to get rid of arrogance and realise that we are protected by the Buddha, for which we feel grateful. When we have this mindset, we become humble and can gladly attribute any success or achievement to the help of others.

When I became a member of Rissho Kosei-kai and started to climb the mountain, or the life of the faith, I was anxious about whether or not I would be able to receive guidance that would lead me along the right path. Now, I am convinced that I have walked the right way, and I believe that someday I will be able to reach the summit without fail. I hope I will continue to walk the Way toward the summit together with all of you.

For that purpose, I vow to continue to revere the buddha-nature of others, disseminate this wonderful teaching of Rissho Kosei-kai to as many people as possible, and devote myself to the practice of the Dharma so that, as proclaimed in the Members’ Vow, I will be able to work to bring peace to our countries and to the world.

Thank you very much for listening.

Mr Barua (centre), with fellow sangha members of the Ram chapter, in the yard of the chapter.