Realising the importance of putting compassion into action

Mr Cleiton Souza Lima delivers his Dharma Journey talk during the ceremony celebrating the 48 anniversary of Rissho Kosei-kai of Brazil.

My name is Cleiton Souza Lima. I am 33 years old and single. I left my parents’ home in late 2007 and moved from the east side to the south side of São Paulo to live on my own. I was looking for a more convenient lifestyle, so I picked a place close to work with easy access to the metro system. I found out later that I’d moved right next to Rissho Kosei-kai of Brazil. Through my window, I saw people performing Japanese taiko [drum] and thought it must be a centre for Japanese people living in Brazil. That was my first encounter with Rissho Kosei-kai.

I work as a computer systems developer. My work is extremely busy—in addition to creating computer systems, I also provide customer support. Our clock-in time is fixed, but not when we go home, and we usually try not to leave before the work is complete. So, when I am finally able to go home, my body is totally fatigued.

Even while leading this busy life, I have always been interested in improving my character, lifestyle, and decision making. I’ve read many books about philosophy, and in those books I learned that Buddhism is not a philosophy but a religion, and many thoughts are contained within it. But even though I was eager to learn more about Buddhism, I couldn’t find the kind of information I was looking for. Since Rissho Kosei-kai was right next to my apartment, I decided to pay it a visit.

I checked the schedule of Buddhism seminars posted on the Buddhist centre’s billboard and thought, “Now is the only chance”. This January, after ten years of living next door to it, I stepped inside the Buddhist centre for the very first time.

The Buddhist seminar was easy to understand and I was satisfied with what was taught there. I learned about the importance of fostering a compassionate mind, respecting the person before you, putting yourself into others’ shoes, and showing appreciation to our ancestors. While listening to the lecture by Rev Kazuyoshi Nakahara, minister of Rissho Kosei-kai of Brazil, I was convinced of the truth in what was taught and thought I might have been a Buddhist from the beginning, though I had not been aware of it.

That was right! I wished to become happy.

The second phrase is, “I wish everyone I like to obtain happiness”.

Yes, just as it says, I also wanted my friends and family to be happy.

The third phrase is, “I wish everyone I dislike to obtain happiness”.

That is right; I also wanted them to be happy.

The last line is, “May everyone who dislikes me obtain happiness”.

I screamed inside. That was the moment I realised that I had been participating in the seminar with a selfish mind. Later in the seminar, I learned various new ways of thinking and decided to find out more about Rissho Kosei-kai.

I have since participated in many of the Buddhist seminars and lectures on basic Buddhism. I also began participating in the Buddhist centre’s sutra recitation at least once a week and helping out at the centre as much as I can.

Although I only recently encountered the teachings of Rissho Kosei-kai, I am thankful for the improvements the teachings have brought about in my life so far.

For example, I was in a relationship for three years. The relationship was not going well, and through learning the teachings, I realised I was the reason it had gone sour. Although we ended up separating, thanks to the teaching that “all things are impermanent”, I was able to overcome the grief. Also thanks to the teachings, the last talk between my girlfriend and I gave us both an opportunity to realise our shortcomings, and we talked about improving ourselves and learning to be more forbearing.

In my workplace, I used morning greetings as a way to put the teachings into practice. Many of the employees are divided into different teams that work on separate projects, but because each team’s work correlates closely with the other teams’, delays directly affect everyone. So, when we cannot meet a deadline, tension sometimes grows among a few of my colleagues. During such times, a simple greeting like “good morning” can cool them down, and I saw many times that the angry faces of my colleagues softened.

A few years ago I experienced a midlife crisis, which happened to me earlier than most other people. (A midlife crisis is feelings of unhappiness, worry and disappointment that some people experience when they are in their 40s or 50s.) I was obsessed with metaphysical questions and my mind was restless, trying to find answers. On the other hand, I had almost no interest in applying what I learned. Fortunately, through my encounter with Rissho Kosei-kai, I learned the importance of moderation and practice.

This April, I received the Gohozon (an image of the Eternal Buddha Shakyamuni as the focus of devotion) during the ceremony of Shakyamuni Buddha’s birth. It was such an honour that I was able to receive the Gohozonon such a blessed day. A week later, when the installation ceremony of the Gohonzon was held at my home, Rev Nakahara, Ms Marta Michi Terada, Ms Mery Candido De Oliveira, and Ms Marli Sanches Ribeiro De Mattoscame to my house for the ceremony. After the ceremony, we shared our thoughts and enjoyed some tea. Before the ceremony, I was not very close with the members who attended, but I felt their kindness and became friends with them. For a few days after the ceremony, I continued to feel the energy my sangha members had shared with me when I prepared offerings for the altar and practised sutra recitation.

I would like to take a vow to share my awareness of the importance of putting compassion into action with as many people as possible. I also vow to strive to be helpful to others and to transform the happiness I receive into energy to make everyone in front of me happy. 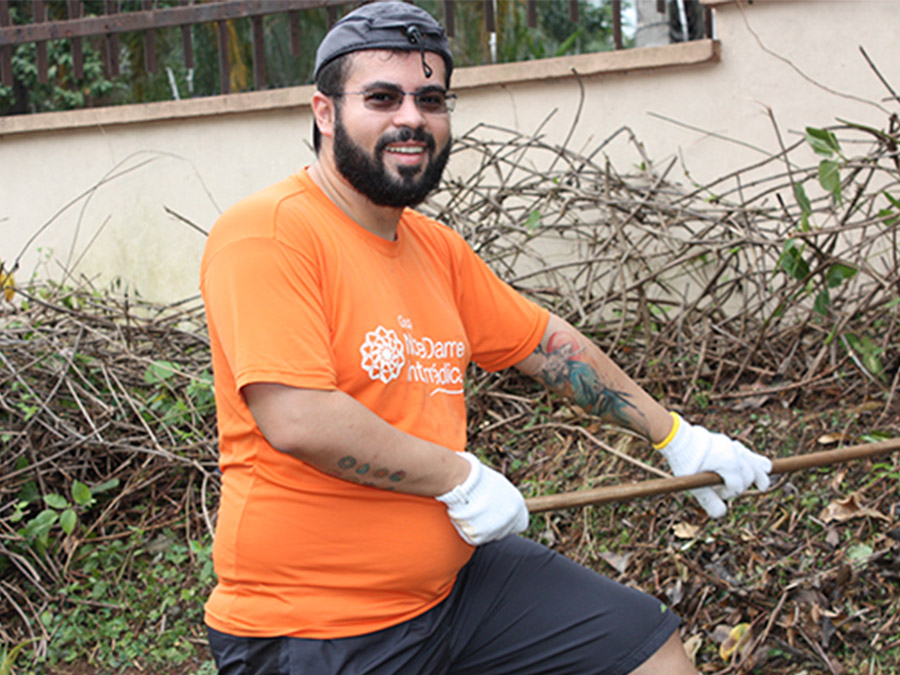 Mr Lima participates in a cleaning activity in the garden of the Buddhist centre.