How I learned consideration for others through family education seminars

This Dharma Journey talk was presented at the Bangkok Buddhist Center on Friendship Day,
13 January 2019—a day when sangha members work on deepening their friendships and strengthening their ties.

I am truly grateful for this great opportunity to share my Dharma Journey with you today.

I was born as the first daughter of the Srimardakul family on 29 January 1967. I was brought up in a family of four with my parents and a younger sister. My father is Thai of Chinese descent and mother is Japanese.

I began to visit the Buddhist centre in Bangkok with my mother, and after graduating from high school in Bangkok, I enrolled in the Gakurin Women’s Vocational School (now Hoju Vocational College) of Rissho Kosei-kai in Tokyo. This school was recommended to me by Rev Yoshie Tsukioka, the minister of Rissho Kosei-kai of Tottori, who had visited the Buddhist centre in Bangkok while I was there.

During my 20 months at the Gakurin Women’s Vocational School, I studied the teachings of the Threefold Lotus Sutra and experienced Dharma training practice at a local Buddhist centre in Japan. After I graduated, I enrolled in a university in Japan. During my four years as a university student, I also continued my study of Buddhism and Dharma training at the Gakurin Seminary.

After graduating, I returned to Thailand and worked for a Japanese company for a year. Then I went to Japan again to attend graduate school, where I met my future husband. We got married in 2004, and two years later we were blessed with a daughter.

Around that time, I had several opportunities to participate as a Japanese–Thai interpreter in the family education seminars held at Rissho Kosei-kai of Bangkok. The seminars were held by the Tokyo Institute for Family Education, an affiliate of Rissho Kosei-kai. Through my role as an interpreter I became acquainted with family education, but I was not particularly interested in its meaning until I gave birth to my daughter. As a mother myself, I hoped that my daughter would grow up to become a person possessing rich humanity who is considerate of others. So, I started studying family education seriously.

Family education (as advocated by the Tokyo Institute for Family Education) is based on the principle that “children are the teachers of parenting”. As suggested by its motto, “if parents change, children will change accordingly”, it encourages parents to change through learning, practice, and by following the philosophy that if you want your child to change, you as a parent must change first.

I am learning how to change my perspectives and ways of thinking toward my daughter through my daily interactions with her. For example, my daughter is learning figure skating. It took her almost a year and a half before she could do an Axel jump, a technique of rotating one and a half times in the air and landing on the ice. One day, however, she suddenly became unable to perform the jump. She didn’t know why she could no longer do it, and she was dismayed by her failed attempts. Although she didn’t say anything, she seemed broken up about it, but all I could do was wonder why.

It is said that children who are learning ice skating often experience a sudden inability to perform a jump. In my daughter’s case, a fear of jumping seemed to grow within her and prevent her from doing it even if she wanted to try. At first, I would say, “Don’t worry, you’ll be able to do it again because you’ve done it before”. But after a while, she still couldn’t perform the jump.

I suggested that if she was scared to jump, it might be best to give up skating and try something different. But she said, “No! I’ll never give up! I’ll practise until I can make it again”. I even told her that the additional lessons would mean we would have to pay an extra fee, but she never changed her mind.

When I mentioned the situation to a family education lecturer, she told me, “As a parent, don’t ask your daughter whether she wants to give up. You should wait and let her decide what to do. What’s important is to pay respect to her will to not give up. As for the lesson fee, how about thinking of it as paying for her perseverance to not give up? I’m sure your daughter will be able to make an Axel jump again”.

I could not fully accept her advice then and there, and I couldn’t stop thinking about the lesson fee. Then the lecturer said to me, “I was taught that it’s good for anyone with a strong attachment to money to practise donation. Through the act of donation, people can get rid of their attachment and become more generous and tolerant. Why don’t you give it a try?” Taking the instructor’s advice, I started the practice of donation because I wanted to remove my attachment to the lesson fee.

My daughter has never been particularly talented at skating—she has often been overtaken by her friends in the same grade, or even those younger than her. Despite this, she has not given up, and she always gives her best during practice. Even when I used to make cruel comments like, “Everyone can do it, why can’t you?” she did not give up skating. On the other hand, I was not reflecting on myself and my own actions, even though I was learning about family education.

After studying family education for some time, however, I gradually came to realise that it was my mindset that caused my daughter’s inability to jump. I did not try to fully understand the pain, frustration, and distress that my daughter felt when she was overtaken by her peers. I did not try to accept what was happening to my daughter, nor did I praise her for her persistence from the bottom of my heart. I did not have enough faith in my daughter and did not appreciate her abilities, and I was always trying to make her do what I wanted her to do. Gradually, I began to notice my own self-centeredness.

Once I noticed my self-centredness, I wanted to change the way I looked at things. I decided to share my daughter’s pain and distress with her, give her my approval, and believe in her possibility.

Although my daughter’s jump is not perfect yet, I have gradually come to witness her willingness to jump and conquer her fear. She is able to perform an Axel jump again, although only a couple of times as of yet. Her ability to jump seems to go back and forth, alternating between successes and failures, which also resembles the movement of my mind. Until the time when my mind and the skill of my daughter’s jump improve and become more stable, both of us must continue our practice. I hope I will watch over my daughter with a bright, kind, and warm heart.

In October of last year, I became a certified Dharma teacher, and I am deeply grateful for it. During the four days I visited Japan to receive this certification, I had the opportunity to reflect on myself and my past behaviour. Ms Kazuko Yabe, then the director of the Tokyo Research Institute for Family Education, told me that 20 October, the day I would receive my Dharma teacher certification, is the anniversary of Rev Tsukioka’s death. (Rev Tsukioka recommended the Gakurin Women’s Vocational School to me.) Also, the Shinjuku Buddhist Center—where I received my Dharma training—is the Buddhist centre to which Ms Kiyoko Maruyama, the previous director of the Institute for Family Education, belongs. It was Ms Maruyama who taught me the importance of family education.

Moreover, while I was participating in the o-daimoku chanting practice, I remembered the moment when I decided to go to Gakurin, after seeing the change in my mother—who had become calm and gentle after she joined Rissho Kosei-kai—and feeling that the teachings were true. I was guided to the teachings by my mother’s daily practice. Reflecting on my life during the chanting practice, I realised that I was still incapable of guiding my husband and daughter by example, and I learned anew the greatness of my mother. I also realised that, in all of my encounters with so many people throughout my life, there had always been someone who connected me with the Dharma.

This year, Rissho Kosei-kai of Bangkok started a training programme for family education lecturers, and I was assigned an important role as a lecturer for the training program. This was a new beginning in my Dharma Journey. The fact that I’ve become able to realise that my encounter with the Dharma was made possible through the guidance I received from my mother, Rev Tsukioka, and Ms Maruyama is an important first step in my path.

I thought at first that it would be enough for me to engage in the family education programmes after I received the Dharma teacher certification. On the last day of my stay in Japan, however, I received guidance from Ms Maruyama, who told me that the teaching of family education is exactly the same as the teachings of the Buddha and the Founder, and that they are not two separate things. She also told me that if I want to share this wonderful teaching of family education with people widely, I have to understand and practise the Dharma first.

Shortly after I returned to Bangkok, another incident (separate from my experience with my daughter) helped me further realise that I am not generous and compassionate enough. It was an important realisation for me as I continue my participation in family education programs.

Through the teachings of Rissho Kosei-kai, I have noticed three important things. First, don’t forget to show appreciation to those who guided you to the Dharma. Second, understand the Dharma correctly and put it into practice. Third, interact with people with generosity and compassion.

I would like to conclude my Dharma Journey talk by resolving to make these three things my goals, and to do my best to fulfil my new role as a lecturer for the family education seminars. 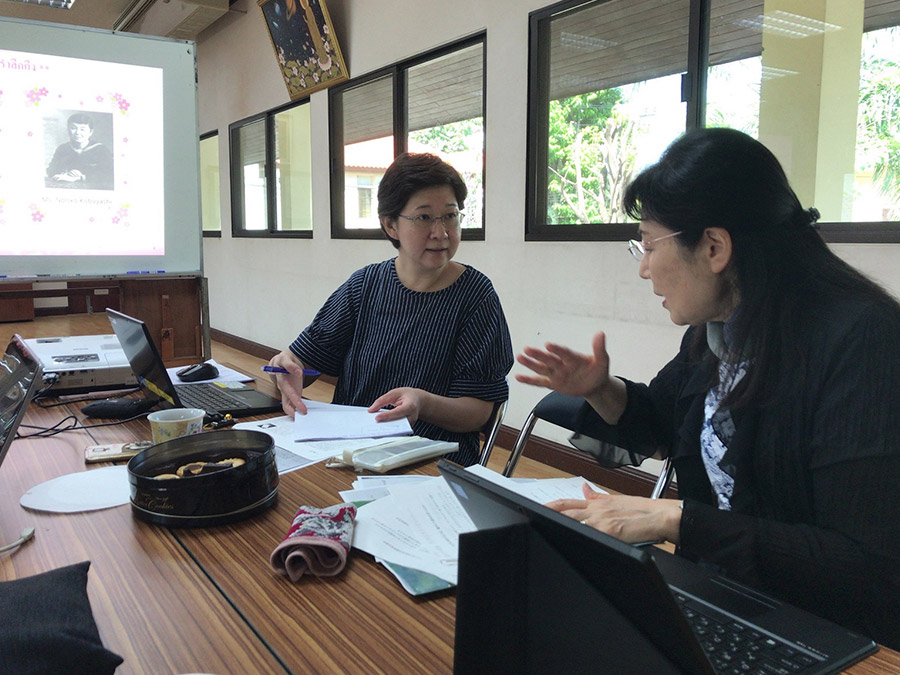 Ms Mayuree (left) discusses the curriculum of family education with a fellow lecturer.