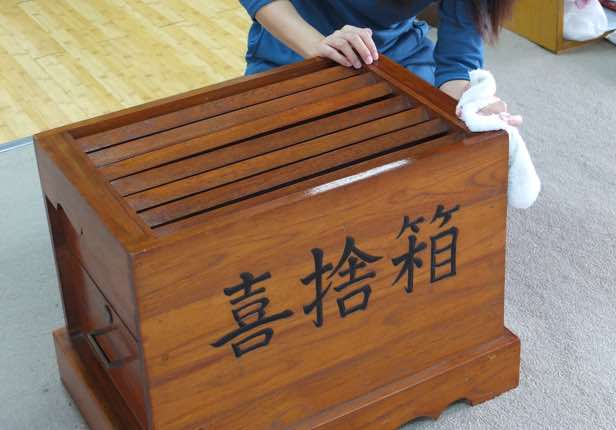 Practice of generosity to improve ourselves

Rissho Kosei-kai (RK) put so much emphasis on generosity as an essential practice that leaders can recommend it not only to existing but to new members. However, some of them might think ‘I don’t have enough money to donate’ or ‘I have already donated and served a lot in other charities’.

What is the true meaning of generosity?

Generosity is not RK’s original practice but proclaimed at the beginning of Six Paramitas (Perfections) by Shakyamuni Buddha to liberate all living beings. Generosity includes the three major types of donations: donating material goods or money, donating the Dharma and donating fearlessness. The seven types of nonmaterial donation, which anyone without properties can practise anywhere and anytime (including the donation of devoting one’s bodily actions for others) are also taught in Buddhism.

Donation of material goods or money to the Buddha can have a misleading impression. We see donation boxes or generosity boxes in Buddhist centres and temples. Generosity in this context means giving with joy and indifference. Thus, generosity is donation without self-centred prayer nor intention to receive transcendent favours from the Buddha, such as recovery from illness, success in exams, safety of families and prosperity in businesses.

However, giving up properties, time and knowledge to others is difficult to put into practice because we have a hard habit of asking for returns. Nothing is as difficult as emancipation from greed and desire. Shakyamuni Buddha taught in the Lotus Sutra that ‘All of the causes of suffering are rooted in greed and desire’ (Chapter 3 ‘A Parable’), and that living beings attempting to end suffering, create more suffering.

What is the right mindset when we practise Generosity?

The following might show you good examples. 1) Gratitude for the fact that we see the Original Buddha, who liberates all living beings of the present world. 2) Gratitude to the occasion of visiting a Buddhist centre where the Original Buddha is installed. 3) Gratitude to the occasion of practising to purify our defiled heart and mind and encourage ourselves to serve others wholeheartedly. 4) Prayer for the donated money contributing to peace in communities and the world.

Most important when practising generosity is our mindset. Regardless of the types of generosity (like donating material goods, money, the Dharma and fearlessness) neither the Buddha nor others will receive them in joy if we consciously or unconsciously act in a patronising way or ask for returns. Such behaviour will be unfavourable and unwelcome.

It is not the case of donating the Dharma if we impose it on others when we have hoza or reach out to connect people with the Dharma. For instance, we may think ‘Why doesn’t she agree with me even after all that I told her’ or ‘He doesn’t practise at all even though I repeatedly urged him to do so’. Similarly, in the case of looking after others and helping vulnerable people, it is not donating our bodily actions if we take offence at them saying ‘He never says thanks. He is devoid of common sense!’ or blaming others.

If we donate money with a negative mindset, it will not create good results. Some members might have a habit of donating money regularly at services and events, where the money is going to make contributions to world peace and brighter societies. A sincere heart is essential to make it come true.

The Story of the Widow’s Offering is a good example of the teaching that practising generosity in pure heart and mind is worth respecting.

A lady in the kingdom of Magadha wished to donate a candlelight to Shakyamuni Buddha, seeing the king Ajatashatru donated hundreds of candlesticks to Shakyamuni Buddha, and begged from passers-by and went to buy oil. The storekeeper saw and asked her ‘You look poor. Why do you buy the oil, not food?’ ‘I live in poverty, but I would like to make sincere offerings of light to the honoured one’ replied the lady, making the storekeeper impressed enough to sell her the quintuple amount of oil.

On that evening, a big wind blew out virtually all the candlelight, except only one bright flame, which had been offered by that lady. Next morning, Shakyamuni’s disciple Maudgalyayana tried to blow out the light; however, it made the flame much brighter. Shakyamuni Buddha, having seen it, addressed the following words: ‘The lady having offered this candlelight had paid homage to eighteen billion buddhas and been given the assurance of buddhahood in the past. She was born in poverty in the present only because she had had no time to practise generosity. As she has made offerings with a completely sincere heart and practised generosity, she will attain Supreme Perfect Awakening after thirty kalpas having perfected all the merits.’

This story tells us that the amount we donate does not necessarily matter for liberation. Rather, it is selfless offering that is essential, then possibly leading to unexpected great merits. We tend to think that we will donate money when our lives are made more manageable, or we will perform roles at the centre when we have more time. Such attitudes are like letting opportunities for accumulating merits just pass.

Changing the psychological mindset from greed and desire to generosity for others’ happiness causes your happiness, better relationships, and a more comfortable society in which to live. A life of thorough generosity towards others without greed and desires is the best life to help realise liberation for both ourselves and others.