Rissho Kosei-kai of the UK

This Dharma Sharing (Spiritual Journey) was presented at
a ceremony celebrating the anniversary of Shakyamuni’s birth in 2017. 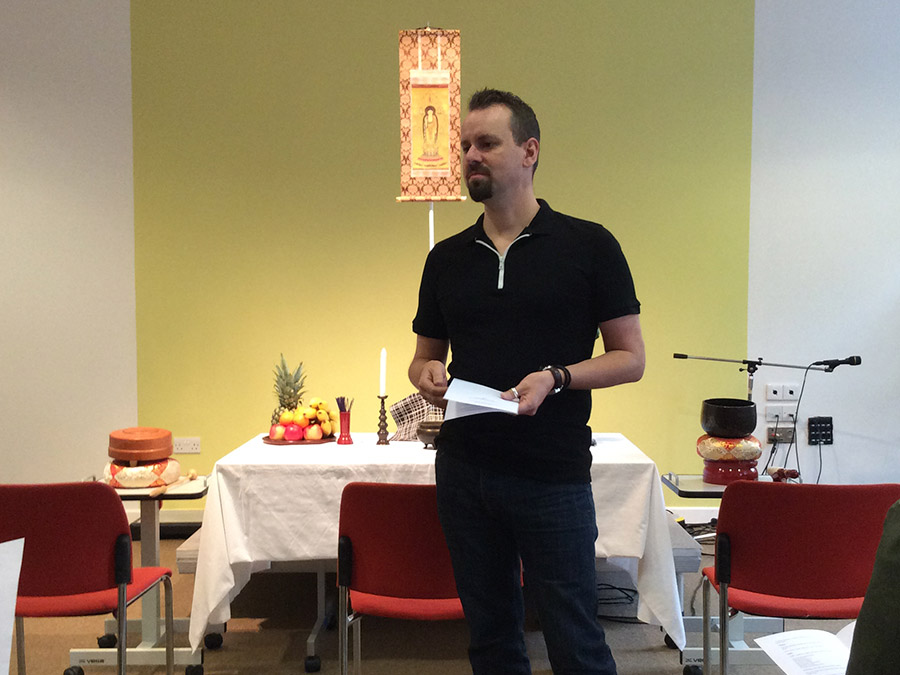 Mr Staff gives an address during the Summer Retreat in the UK in 2017.

I have been interested in Buddhism since I was a teenager. Buddhism appealed to me as it did not put faith and reliance solely in an external saviour but in yourself through following and applying the teachings. It was not until watching a movie about the life of Tina Turner that I first heard the O-daimoku being chanted, which then started my interest and journey with the Lotus Sutra and eventually led me to Rissho Kosei-kai.

I first read about Rissho Kosei-kai in a book about Nichiren Buddhism that I bought in 1999, and a few years later I found a copy of the Threefold Lotus Sutra published by Kosei Publishing in a book shop. I was interested in the Lotus Sutra and from what I had read about Rissho Kosei-kai I wanted to find out more about the organisation and I was pleased to find that there was a group here in the United Kingdom. I sent an e–mail to ask if there was a group near Cardiff and soon had a reply from Rev Megumi Hirota, informing me that at that time there was no group in Wales, but she invited me to visit Oxford to learn more.

After our initial meeting, I attended Hoza sessions in Oxford and St Albans regularly and eventually had a Gohonzon enshrined at my home altar in 2004.  Initially, I was painfully shy and would hardly say anything at Hoza, but through the support and encouragement of the sangha I gradually grew in confidence and now, although still not a hundred per cent comfortable and not a natural public speaker, I am able to go outside of my comfort zone and speak to groups and share the Dharma.

I was fortunate enough to be able to go to the third World Sangha Assembly at Rissho Kosei-kai’s headquarters in Tokyo in 2006. It was there that I would hear the personal testimony of Ms Yoshiko Fujita from the Los Angeles Dharma Center. Seeing Ms Fujita in a wheelchair in the Great Sacred Hall and listening to her personal Dharma journey talk was deeply moving for me. Having been seriously ill with several brain tumours, undergoing many operations, going through hardships, and having to close her business, Ms Fujita had found strength in the Dharma and was able to see things positively, despite her illness, and appreciate life. If Ms Fujita could do this, I thought surely I could, too, and although I did not get to meet Ms Fujita in person, I am very grateful that she shared her Dharma journey talk that day.

This encounter at the Great Sacred Hall did not make my depression magically disappear, but it helped me to live with it. Through teachings such as ‘All things are impermanent’, I was able to endure dark times, as I knew they would not last forever, and also cherish the good times, as these are also impermanent. I was able to appreciate the people who support me in life, my husband, my family, my friends, and the sangha.

Rissho Kosei-kai teachings have also helped to keep the memory alive of departed family members. After inviting my family to join me in observing the summer O-Bon festival and O-Higan on both the spring and autumn equinoxes, we talked about family members who have passed away, some who passed away before I was born or when I was very young, and we shared memories and stories that helped me feel like I knew them, and we also began to visit my grandparents’ grave to clean it and offer flowers, incense, and prayers. Through these encounters and sharing my faith, my mother also became a member of Rissho Kosei-kai.

I was also helped to come to terms with my father’s side of the family. My parents divorced when I was twelve years old after a very difficult marriage, and both had had children from previous marriages. I was not close to my father and after the divorce, I did not keep in contact with him or anyone on his side of the family, and I even changed my surname to my mother’s maiden name. After receiving the Gohonzon and Posthumous Names for All One’s Ancestors, I was encouraged to include my father’s family name on the blessing for the ancestors. Initially, I was reluctant, but I was helped to see that without my parents I would not be here, so I should be grateful to them for that if nothing else. Due to my father’s family name being on my home altar, I found out that my brother, from my mother’s previous marriage, whom I had not seen since the divorce, was still in contact with one of my brothers from my father’s previous marriage. This led me to meeting with my brother and getting to know him again, and later meeting with my father. My meeting with my father did not lead to a reconciliation, but we did part on good terms and I would later request posthumous Dharma names for my paternal grandparents and include them and my father’s side of the family in memorial services.

I have been so fortunate in having encountered Rissho Kosei-kai. I have been able to take part in Rissho Kosei-kai’s international youth conferences, receive Dharma leader training in Japan, represent Rissho Kosei-kai of the UK at the Buddhist Council of Wales and interfaith events, and meet so many wonderful people and bodhisattvas that I now count as friends and my Dharma family. I am very grateful for all of the opportunities I have received with Rissho Kosei-kai and for the teachings and support of the sangha, which helped me to grow as a person.

I will continue to share the Dharma, and it is my dream that one day a Rissho Kosei-kai sangha will develop in Wales. 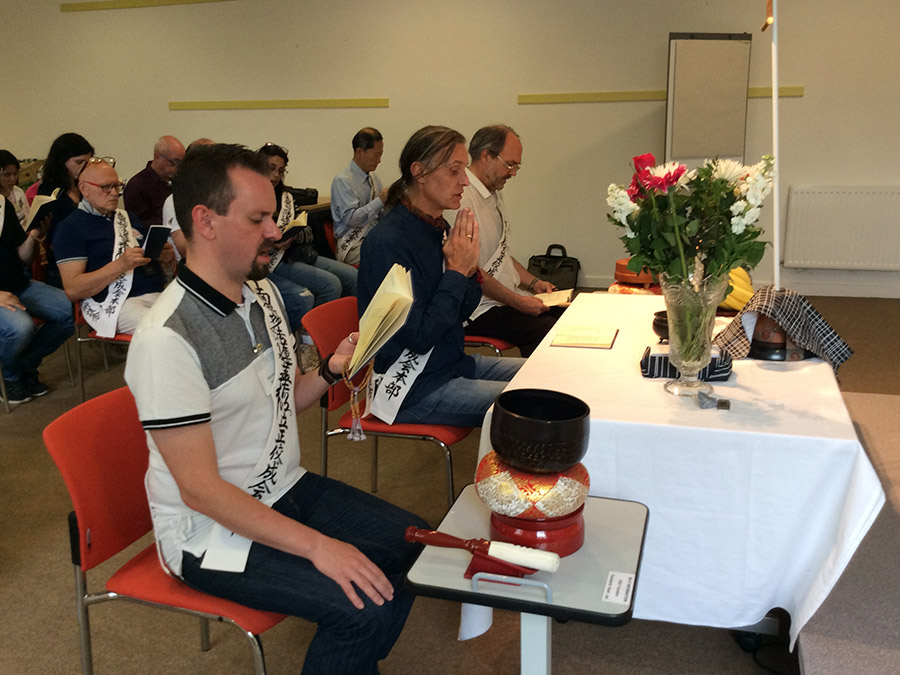 Mr Staff serves as a subleader of sutra recitation, sitting before the gong.