What I begin to see beyond challenges

This Dharma Journey talk was presented at the Great Sacred Hall on 1 March 2019, during the ceremony for the first day of the month (Uposatha Day). 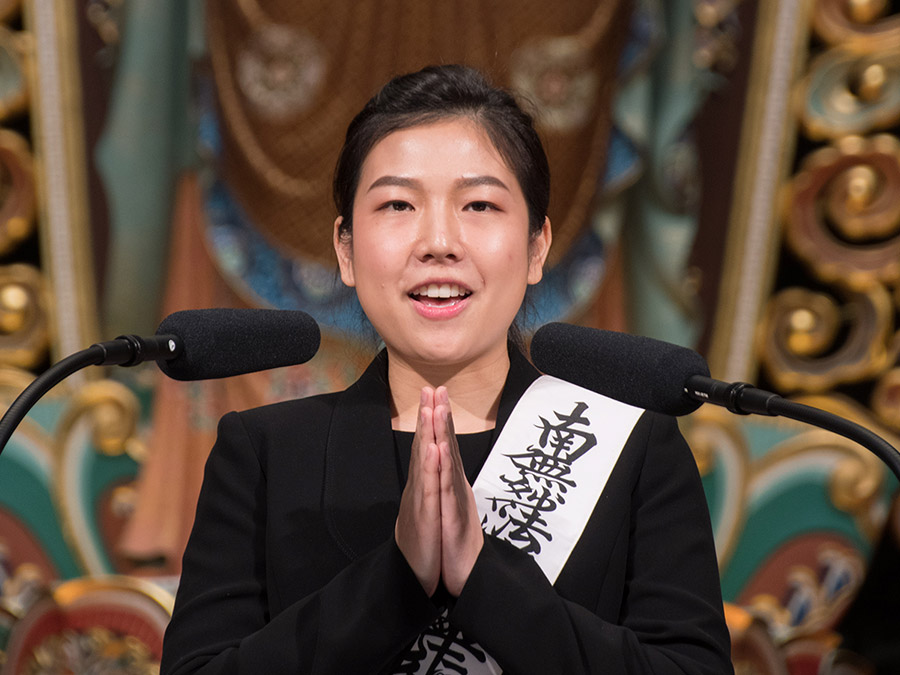 I was born in 1992 as the only daughter to my parents and the younger sister of my brother, in the Panyameepolkij family in Bangkok, the capital of Thailand.

I first learned about Rissho Kosei-kai when I was in the fifth grade. My cousin asked me if I would come with her to visit a place where we could study Japanese. As I was interested in learning Japanese, I accompanied her to the Buddhist centre of Bangkok without knowing anything about Rissho Kosei-kai. Learning Japanese was fun, and, more than anything else, I was happy to be with my favourite cousin. I started to visit the Buddhist centre with her from time to time. My cousin guided me to Rissho Kosei-kai’s teachings and I joined the organisation a while later.

Later that year, my cousin enrolled as an overseas student of Rissho Kosei-kai’s Gakurin Seminary and went to Japan. Two years later, when my cousin graduated from the Gakurin Seminary and returned to Bangkok, I began to visit the Buddhist centre with her again. My cousin told me a lot about her experience in the Gakurin Seminary. What especially impressed me were her stories about Founder Nikkyo Niwano when he was in his forties. She told me that the Founder, wishing that all people would find happiness through the teaching of the Lotus Sutra, had undergone religious training by living apart from his family for a decade. Thanks to his religious training and his unrelenting effort to disseminate the Lotus Sutra not only in Japan but throughout the world, we could encounter the teaching of the Lotus Sutra. I was truly impressed by the life of the Founder and wanted to learn more about the teachings of Rissho Kosei-kai.

In 2012, when I was junior in university, Rev Yoshio Sasagawa, then the minister of Rissho Kosei-kai of Bangkok, asked me if I was interested in studying Buddhism at the Gakurin Seminary. He encouraged me to apply for the overseas students course. After thinking about it for days, I finally decided to go to Japan for two reasons. One was that I wanted to know the difference between Buddhism in Thailand and Buddhism in Japan. The other was that I thought living apart from my family would be a good challenge to let myself grow and become more independent. Until then my family had helped me, the smallest member of the family, in everything I did. My cousin encouraged me by saying, “At Gakurin, your life will probably change”.

In April 2017, my life as a student of the Gakurin overseas students course began. When I was still feeling anxious about living in the dormitory apart from my family, the Japanese lessons began. Every day I studied for as long as ten hours in the Japanese-language school and in the dormitory, but my Japanese was not improving. I wondered why my effort, the hardest I had ever made in my life, wasn’t bringing about results. I was sad and cried sometimes. But I persisted with the study and was able to proceed to the second level at Gakurin a year later.

In my second year, the overseas students had Dharma dissemination training at a local Buddhist centre for two and a half months. The Dharma dissemination training was divided into two terms. The first term was three weeks long, and it began in May. The second term was seven weeks long, and it took place a few months later, beginning in September. The venue of my training was the Hamada Buddhist Centre in Shimane Prefecture, in western Japan.

During the first Dharma dissemination training, I became acquainted with numerous members, spent time with them, and enjoyed delicious meals with them while I underwent many kinds of training. All of these experiences were precious gifts from the Eternal Buddha Shakyamuni, Founder Niwano, and President Niwano. I am truly grateful.

As I was not good at talking about my own feelings in public, I was not able to speak about myself in Hoza sessions during my first Dharma dissemination training. In the beginning of the second term, I made it my goal to speak to others about what was on my mind. Because of my lack of confidence, I found this hard at first. When I asked Rev Watanabe for advice about my inability, she suggested that I should try to do something I thought I was poor at every day. I made it a habit to do something I was weak at every day. After a while, I felt confidence begin to grow within.

One day, I accompanied a chapter head and a member of the Buddhist centre to visit the house of another member, Mrs K. Mrs K greeted us with a warm smile. She told us in tears that she had lost family members every year between 2011 and 2013, and now she lived alone. Listening to her story, my heart ached and I felt like crying. She told us that she had had no one to talk to about her experience, and so she had kept the pain to herself. Having shared the experience with us, she looked relieved. When we were leaving her home, Mrs K thanked us. It was a gratifying moment for me. I was grateful for the opportunity to be able to pray for the happiness of Mrs K.

Through this meeting with Mrs K, I learned that when we listen to a person with all our heart and are genuinely considerate of his or her feelings, mutual understanding becomes reality, and the buddha-nature of that person begins to open up.

I would like to express my heartfelt thanks to the members of the Hamada Buddhist Centre who prepared delicious meals for me every day. Thanks to them, fish has become my favourite food! Thank you for greeting me cheerfully every morning, and for always caring about me and offering me kind words. Thank you also for the wonderful sweets, which delighted me (and added a few pounds!). You are my second family. Please let me express my heartfelt appreciation to all of you.

Today I am honoured to stand here to present a Dharma journey talk and represent the five students of Gakurin’s 25th overseas students course. All of us students are very grateful for the ministers and members of the Buddhist centres who warmly took care of us and watched over us like their real families during our Dharma dissemination training.

At the Gakurin Seminary, I learned that the members of our global sangha—even though we may come from different linguistic and cultural backgrounds—can achieve mutual understanding through studying and putting into practice the teachings of the Eternal Buddha Shakyamuni, Founder Niwano, and President Nichiko Niwano.

President Niwano taught us in his New Year’s message the importance of being firmly resolved to move forward creatively. My dream is to become a science teacher at a junior high school in Thailand after my graduation from Gakurin. While teaching science in the classroom, I hope that I will be a teacher who can at the same time share with students a Buddhist way of thinking. I also hope that I will be able to assist Rev Shoko Mizutani (the present minister of RisshoKosei-kai of Bangkok) and the other staff members in the Buddhist centre in sharing the teachings I have learned in Gakurin with many other young people in Thailand.

The study of the teachings of the Eternal Buddha Shakyamuni and Founder Niwano brought me to realise the importance of “thinking of others first” and the joy of doing my best for others. From this time on, I will make the most of my future encounters, always be open to others, and grow into being a person who can work for the happiness of others.

I would also like to express my gratitude to my parents, who enabled me to come to Japan to study at Gakurin and have this wonderful experience. Thank you very much for listening. 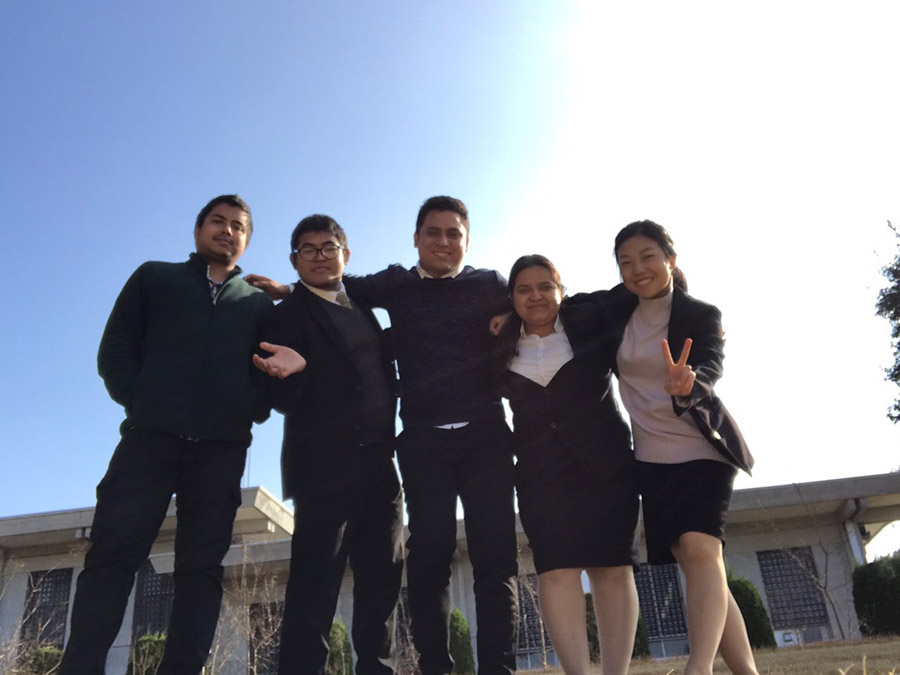 Ms Chantra (right) and her classmates of the Gakurin Overseas Students Course.