The wonderful encounters that drew me closer to the Buddha

This Dharma Journey talk was presented on 9 September 2018,
at the ceremony for the 20th anniversary of the Sri Lanka Dharma Centre’s foundation. 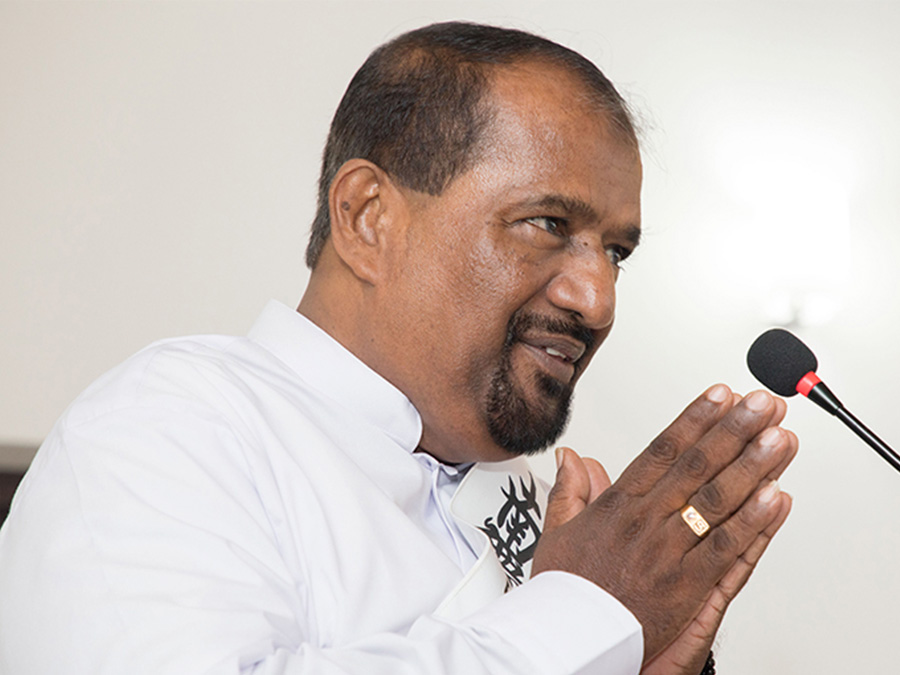 My name is Sunanda Tilakarathne. I am 58 years old. I am grateful for Rissho Kosei-kai’s teachings, which have sustained my life since I became a member 20 years ago. I would like to talk about three people who are very important to me, among the many people I have met and shared wonderful experiences within my life.

The first person who comes to my mind is my mother. Many of you probably also remember your mother first of all. I was truly my mother’s son, and I couldn’t live a day without seeing her face until I was 13 years old.

The next person I dearly remember is my father. When I was three years old, my father bought me a small rocking horse and a bicycle. While I have forgotten the lullaby my mother sang for me every night, I still remember the song—in Hindi—that my father sang to me when he put me on that rocking horse.

Next, I will talk about the third person, the encounter with whom has brought me the greatest treasure in my life. In 1963, when I was three years old, I got up in the morning of Wesak Poya Day (the full-moon day in May every year) to find my home decorated beautifully. Our family lived in a small room behind a building that my father used as his workplace. Both the room where my family lived and my father’s workplace were decorated for the holiday. My father held me in his arms to show me a decoration he had made himself. The decoration was mounted with pictures of a person. I liked the pictures very much. My father told me that he had deep respect for the person, and that people were glad to make all kinds of decorations in respect to this person. Hearing this, I came to know for the first time that there was a person more venerable than my parents. That person, as you know, was none other than the Buddha.

I then learned for the first time that on the Wesak Poya Day, people offer flowers, light votive candles and incense sticks, and chant the sutra to show their respect to the Buddha. From that day forward, I began to offer the sutra recitation with my mother. My parents and the Buddha were all that mattered in my life as a child.

When I was a child, I always looked forward to Wesak Poya Day because of the many kinds of colourful decorations that would shine brilliantly all over Sri Lanka. My father made lanterns for Wesak Poya Day every year.

I began making lanterns myself when I was around ten years old, using small candles. After I got married and had children, I started making lanterns for my family every year. When, one year, my lantern got wet and broken in the rain, I couldn’t help but wonder why the Buddha did not protect my offering.

Before I joined Rissho Kosei-kai, I had faith in the Buddha and I participated in various activities of the temple. I helped hold events at the temple and served as head of the temple’s lay supporters. I enshrined images of the Buddha both in my home and in the photo studio I owned, and I prayed before them every day.

However, in May 1996, the month of Wesak Poya Day, an unforgettable incident happened. There was a fire in my photo studio, and the building burned down. This incident prevented me from doing business and brought me into a period of financial difficulty. The fire broke out when an employee threw a half-extinguished match into the trash after using it to light the offering candles for the Buddha. The incident devastated me.

The Buddha did not protect my photo studio, even though he received the offering of candles. I was sad and I felt unable to believe in the Buddha anymore. I lost my drive to visit the temple and make offerings to the Buddha. In Sri Lanka, when people chant the five precepts on some ceremonial occasions in front of Buddhist monks, they usually put their palms together in reverence. I began crossing my arms to express my disbelief.

The six months after the incident were a very painful time for me. It was during this time that Mr Mahesh Rodrigo, my wife’s elder brother, introduced me to Mr Gamini Chandrasekera. Whenever Mr Gamini met with me, he talked about a Buddhist organisation in Japan. Then, a while later, he invited my family to participate in one of the organisation’s events.

That organisation was Rissho Kosei-kai, and the ceremony was truly auspicious. I was deeply impressed by the speech of a guest from Japan, and I instantly decided to join the organisation. The guest who made a speech was Rev Masatoshi Shimamura, who would later be appointed the director of Rissho Kosei-kai International of South Asia. I still deeply respect him.

I travelled to many places in Sri Lanka to disseminate the teachings of Rissho Kosei-kai. I also participated in Rissho Kosei-kai seminars in Bangkok and Tokyo to continue my study to become qualified as a Dharma teacher. I drew ever closer to the Buddha. I was also able to guide more than 50 people to Rissho Kosei-kai’s teachings, getting them connected with the Dharma and the sangha. One of the people whom I guided to the teachings was Mr Percy Wijeyaratne, who would later become a chapter leader. I am very happy to see him make diligent efforts for the Dharma every day as a leader.

Throughout the 20 years I’ve been a member of Rissho Kosei-kai, I’ve had a lot of experiences that were joyous and pleasant. But at the same time, there were also things that were sad and painful, which made me feel like running away from the organisation.

In the Sri Lanka Buddhist Centre, there were times when members who did not correctly understand the teachings were in discord with another group of members, quarrelling with each other and calling each other names. In 2010, when the sangha was experiencing its most difficult time, Rev Yoshiaki Yamamoto came to Sri Lanka from Japan to be our minister. It was a blessing for our sangha.

Even after Rev Yamamoto began to serve as our minister, however, the discord among the sangha members persisted. But Rev Yamamoto treated all members equally and with warmth and continued to revere the buddha-nature in each and every member.

As the years and months passed by, the members’ trust in Rev. Yamamoto deepened little by little. The fact that his wife, Mrs Kayoko Yamamoto, came to Sri Lanka with her husband was a huge help in developing amiable ties among the members. Eventually, last year, a new Buddhist Centre building in Wattala—the construction of which Sri Lankan members had been awaiting for nearly 20 years—was finally completed. I am so happy that the Sri Lanka sangha has grown into a wonderful sangha worthy of a new Buddhist centre building.

Some time ago, when my mother participated in a Memorial Day ceremony held in the Buddhist centre in Wattala, she began to feel ill during the service because of her chronic high blood pressure. Her home was very close to the Buddhist centre, and members could have easily taken her there to rest. Instead, the members were considerate of my mother’s hope to participate in the service and hear the preaching, and they kindly took care of her by giving her the necessary medicine and helping her lie down on a mattress.

When I arrived at the Buddhist centre a short while later, I saw my mother delightfully listening to a monk’s sermon on the mattress, supported by members. My heart was filled with gratitude upon seeing this.

My mother died not long after that, but I believe she was overjoyed to experience this wholehearted support from her fellow members.

Through the teachings of Rissho Kosei-kai, I became able to face any hardship without running away from it, by always keeping the Buddha’s teachings in mind. Whenever I’ve faced difficulties in my life, the Buddha has always helped me, sending me someone who would extend a helping hand.

My mother held temples in great esteem and listened to the preaching of monks throughout her life. 10 years ago, however, when my father died, none of the relatives on my mother’s side in Bemmulla turned out for my father’s funeral. She resented her relatives’ show of disrespect for her husband, and since then she did not wish to visit her hometown of Bemmulla. I understood her feelings and also kept my distance from her home.

Ten days before my mother passed away, I wanted to somehow lessen the anger that she felt toward her relatives in Bemmulla. I talked to her about the teaching expounded in chapter 12 of the Lotus Sutra, “Devadatta”. When I spoke about the importance of throwing away resentment against others and revering the buddha-nature in them, she understood my wish. A week before she died, she visited her home at Bemmulla, accompanied by her family, and spent a pleasant and fulfilling day with her relatives. I believe that the reconciliation with her relatives may create a large merit that will benefit her in her next life.

When my mother knew her death was close, she told a monk that she wanted to donate her oxygen inhaler to the temple after she died. During the last week of her life, she lived like a bodhisattva in the Lotus Sutra.

I am sincerely grateful for Mr Gamini for introducing the wonderful teachings of RisshoKosei-kai to Sri Lanka, and for Mr Mahesh for guiding me to Rissho Kosei-kai. I am truly grateful for my wife, for it was her who enabled me to meet Mr Mahesh, and for my father and mother, because it was my parents who introduced a wonderful woman to me as my wife. Thanks to my encounter with Rissho Kosei-kai, I was able to deepen my understanding of Buddhist teachings and affirm my faith in the Buddha, which is the most valuable, unsurpassable treasure for me. 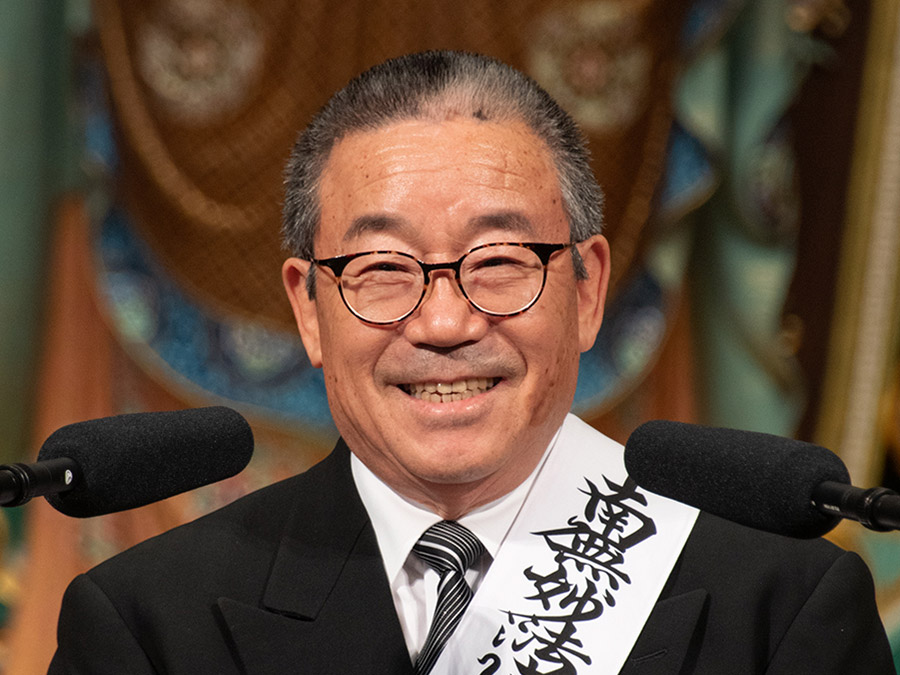 Believing that everyone possesses buddha-nature