The two years at Hoju Vocational College that changed my life

This Dharma Journey talk was presented in the Great Sacred Hall on 1 March 2019, during the ceremony for the first day of the month (Uposatha Day). 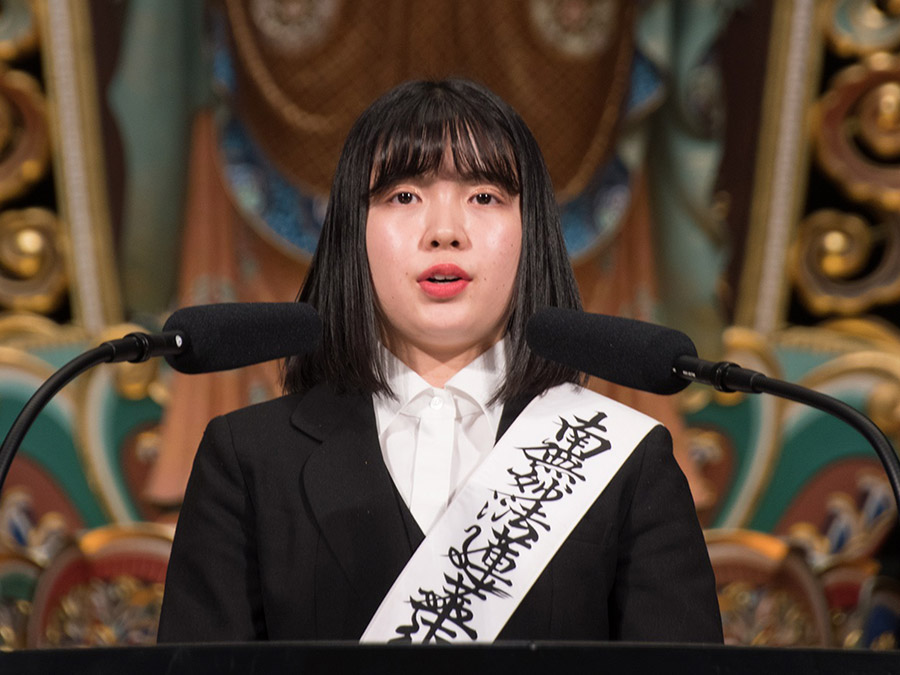 Hoju Vocational College offers classes on humane education (the study of nurturing compassion and respect for living beings) based on the spirit of Buddhism. I decided to enrol in the college because I wanted to become capable of accepting everything positively by changing my perspective.

All Hoju students live in the college dormitory, and I was often bothered by my classmates’ words and actions there. I was not happy with myself because I got upset so easily. Through my classes, I became capable of realising that we all grew up in different environments and have different ways of thinking. I also realised that I was easily upset by others’ behaviours because I looked at things according to my own criteria. After that, I began to be able to reflect on my own behaviour, but there were things I still couldn’t accept no matter how hard I tried. I reacted poorly to unfavourable situations because I was not tolerant enough and I always wanted others to do what I wanted them to do.

Hoju Vocational College has an annual programme for students that offers practical training in Dharma dissemination at a local Buddhist centre. In January, I visited the Suzuka Buddhist Centre in Mie Prefecture for the training. In the beginning I was eager to put into practice what I had learned in my humane education classes, but my enthusiasm faded as soon as I met the chapter leader who would be my mentor. She appeared to be a very strict person, and I was nervous around her. She was skilful in sharing the Buddha’s teachings with other members, but her straightforward manner made me nervous. I thought I would someday become a target of her harsh guidance. Since I could not talk to her candidly about what was on my mind, my self-confidence withered rapidly.

It was around this time that a teacher from the college visited the Buddhist centre to check on the students’ progress. I asked this teacher how my classmates were doing and learned that some had already begun the kinds of training I wanted to practice. I was frustrated, and I wondered what I had been doing up until this point.

With mixed feelings, I gave a presentation about Hoju Vocational College to the members of the Buddhist centre, along with my teacher. As I was reciting the aims of the college, a sense of pride at being a Hoju student—which I was beginning to lose—welled up in me. I consulted with my teacher and decided on “revealing the buddha-nature in myself and others” as the theme of my Dharma dissemination training.

After the talk with my teacher, I challenged myself to get to know the chapter leader whom I had thought scary. I asked how she came to know Rissho Kosei-kai, and while hearing about her past experiences and her encounter with Rissho Kosei-kai’s teachings, I felt my heart opening up toward her. I discovered that she was thinking about me a lot, which also warmed my heart. My impression of the chapter leader changed completely as soon as my mindset changed. It was a moving experience for me.

Beginning the next day, my attitude toward attending Hoza sessions also changed. I started trying to draw close to the feelings of the people who were suffering and hoped they would achieve happiness soon. While consciously continuing the practice of revering the buddha-nature in others, I began to be able to see everyone with respect.

When I was talking to a certain member one day, words of appreciation for her kindness to others came to my mouth effortlessly. She smiled brightly and thanked me, saying that my words had removed her worry and that she felt her heart lighten. I was gladdened by her words, and I felt tears welling up. This experience became my life’s treasure.

During another Hoza session, a member said, “We were trying to change the situation we were in, but it didn’t work. We had to change ourselves first”. These words stuck with me, as I knew how hard it was to change oneself. It takes a lot of effort. But I was convinced then that my circumstances would change if I changed, and that to reflect on myself was indispensable in order to bring about that change.

The Dharma dissemination training at Suzuka Buddhist Centre became an opportunity for me to make a major decision. When I was small, my parents fought daily. When my father got drunk and argued with my mother, he would become a different person who took his anger out on the things around him. My mother had a strong personality, so she did not give an inch. My elder brother and I would try to stop the quarrels, crying. One day, my mother decided to leave home in order to keep us away from our father. While our father was out one day, she packed up, took my brother and me, and moved out of the house. Our parents then divorced.

After the divorce, my father often sent us letters telling us that he wanted to see my brother and me, and he even began coming to our school to visit us. I began to want to stay away from our wayward father. But my father, who became an alcoholic after the divorce, did not care about my feelings and kept showing up at school. Finally, when I was in eleventh grade, my father came to see me at school and I told him to leave at once and never come back. Though I threw such harsh words at him, I began to feel sorry for him. He would not be able to see his children anymore, and he might die alone. I thought if I didn’t make an effort to reconcile with him, I would definitely regret it someday. Yet since I believed my mother would disapprove of this, I was indecisive and until this year I have kept my feelings to myself.

During the Dharma dissemination training, I consulted the chapter leader about my father, which prompted me to do what had been on my mind for so long: I took a chance and called my mother, telling her my desire to meet my father. My mother seemed a little anxious about it, but she has allowed me to meet him later this month, during spring break. She told me the reason that my father began to drink and vent his anger, and I learned for the first time how deeply he was suffering. I felt remorse for what I had said to him, and for pushing him out of my life instead of showing him even the slightest appreciation for his parental love.

Later, I learned that the day I consulted the chapter leader about my father, he had called the college to ask if he could visit me at school. Now I look forward to seeing my father soon, and when I meet him I hope I can express how I care for him.

My encounter with the Lotus Sutra enabled me to learn a new way of looking at things. I have gradually become able to believe that everything that comes my way is a necessary lesson in life. I have realised the importance of revering the buddha-nature in others and become capable of wishing all people happiness. I hope to make use of what I learned at Hoju Vocational College and grow into an individual who can contribute to society. 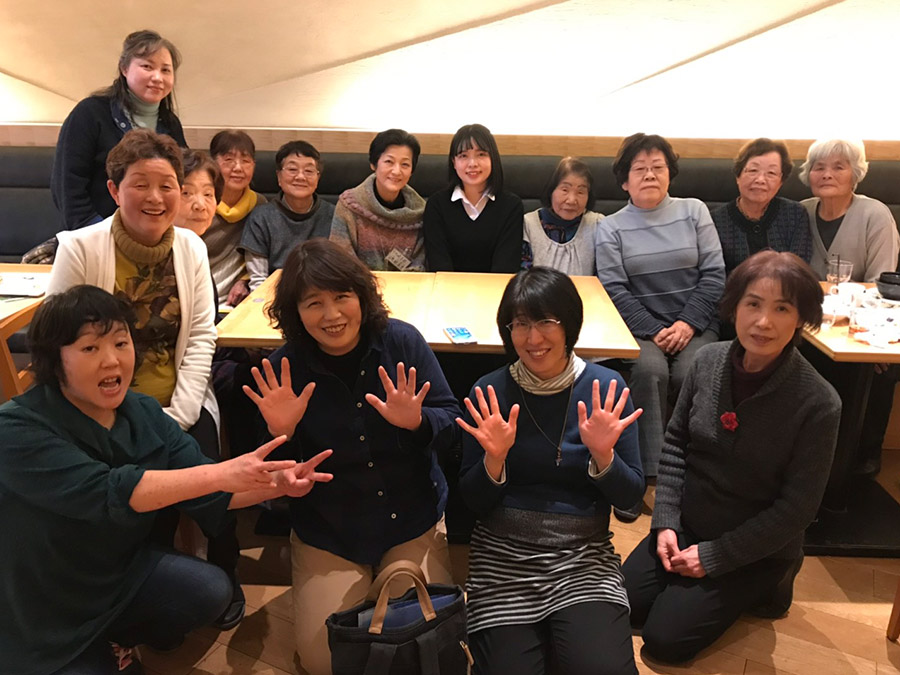 Farewell party for Ms Nakakawaji with the chapter members during her practical training in Dharma dissemination.