This Dharma Journey talk was presented in the Great Sacred Hall on 1 November 2019, during the ceremony for the first day of the month (Uposatha Day). 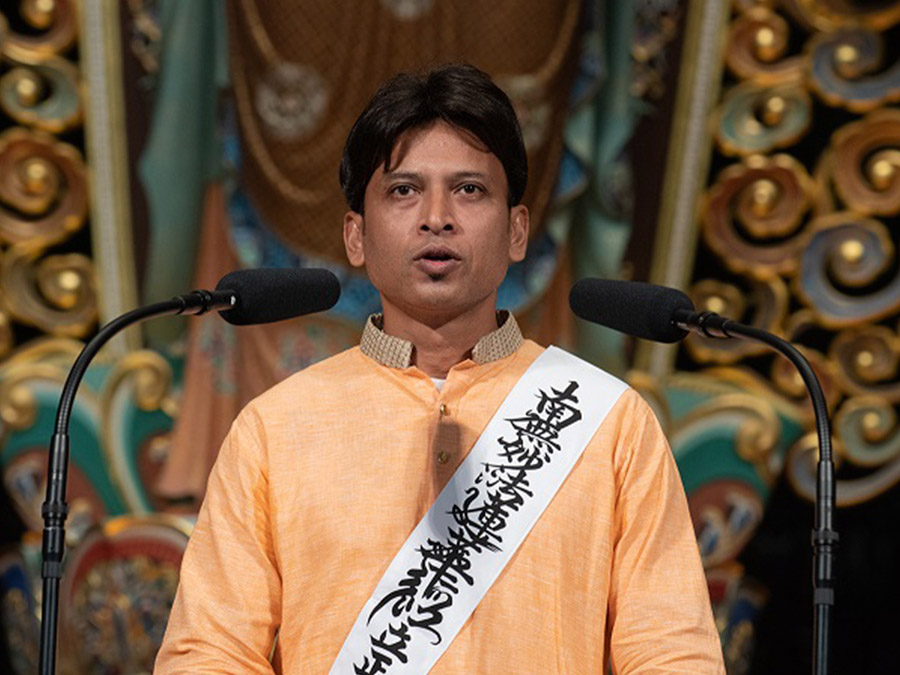 My name is Ruman Barua and I am a member of the Cox’s Bazar chapter of Rissho Kosei-kai of Bangladesh.

I was born in Cox’s Bazar in 1974 to a Buddhist family of five: my parents, my elder sister, my elder brother, and me. As the youngest child, I was brought up with the ample love and attention of my family. I was a spoiled child who acted selfishly toward my brother and sister and demanded everything I wanted until I got it.

When I was a high school student, I engaged enthusiastically in extracurricular activities and was a popular student who everyone knew. I caught the eye of a politician in my town who invited me to join a political group of which he was a member. At that time, joining a political movement put you in danger. Soon after I became a member of the group, I found myself being targeted by an Islamic fundamentalist group.

To secure my safety and allow me to receive higher education, my parents sent me to Moscow in the Soviet Union a few years before the nation’s dissolution in 1991. Life in the Soviet Union was full of surprising experiences. As far as I knew then, it was a quiet and peaceful country, and I was especially fascinated by its rich nature.

Although the Soviet Union was a communist country, many religions were sending in missionaries. I was invited to join several religious groups, but not a single one was Buddhist.

One day, I visited a Christian church with a friend. I heard a beautiful sermon and learned about the compassion that Jesus Christ expounded. I met a Polish young man there who was seeking a religion. When I told him I was a Buddhist, he asked me what my religion taught. I was embarrassed by his question as I had not sought Buddhism seriously until then and did not know much about it. By making an excuse that I had to return to the dormitory, I left the church as if fleeing from him. I met him again a few days later, but I again fled from him. I am still remorseful for not having been able to talk with him about Buddhism, which might have been helpful in his spiritual quest.

After this happened, I became interested in learning about Buddhism and began looking for a Buddhist temple in the Soviet Union. I searched until I graduated high school and was about to return to Cox’s Bazar, but I couldn’t find any. If I had found a Buddhist group and joined it, however, I may not have encountered Rissho Kosei-kai and learned the true teaching of the Buddha that Founder Nikkyo Niwano left for us to study and practise.

Although Islam was made the state religion in Bangladesh in the 1980s, Buddhism is one of the religions permitted by the Bangladeshi government. I had studied Buddhism a little at school, but my faith had remained the kind where I simply prayed for the Buddha to give me better scores on exams.

When I was young, I liked a Buddhist festival called Ponya very much. On the day of the festival I wore sunglasses, and, in cool clothes and expensive shoes, had fun with girlfriends after I worshipped at temples. I had always attended major Buddhist events in my hometown—my mother would tell me that I would receive good merits if I heard the Buddha’s teaching. Her words were always in my mind. She would also tell me I could go to heaven if I did a good thing, but that I would end up in hell if I did a bad thing.

As a child, I often told lies. Hoping to correct my bad habit, I went to Buddhist gatherings often to hear the Buddha’s teachings. During the gatherings, however, the monks only chanted sutras, the meaning of which I could not understand. I just repeated with other participants, “Sadhu! Sadhu! Sadhu!”—which means “wonderful” in Bengali—after the monks chanted. The gatherings usually lasted two hours, but often went as long as five to six hours. We were not allowed to leave until the events finished, and we were told that we would incur severe punishments if we left. This made me dislike Buddhism, and I stopped attending the gatherings.

Some time later, when my dislike of Buddhism began to dissipate, Mr Bobby Barua, a relative of mine, invited me to a Rissho Kosei-kai meeting held at the Cox’s Bazar chapter. I began to attend the centre’s activities and soon found myself engaged in Dharma practice with diligence. After a while, I was appointed head of the chapter’s youth group.

Disseminating the Dharma in Bangladesh was a challenging task—it was not easy to transmit the Founder’s teaching of the One Vehicle to people who grew up in a Theravada Buddhist tradition. I focused on young people since I thought they were more open to new ideas. Many young people listened attentively to what I explained about Rissho Kosei-kai.

Together with four young members of the Cox’s Bazar chapter, I visited village after village to share the teaching with young people. We were able to set up hubs in several places where young members could gather,and these hubs developed into a network of young members after about two years. This network became a source of power for youth group activities.

Around this time, Rev Norimasa Aritomi, minister of Rissho Kosei-kai of Bangladesh, asked if we could hold a youth conference in Cox’s Bazar for roughly 10,000 young people. I thought this was impossible, so I declined. Mr Kanchan Barua, general affairs director of Rissho Kosei-kai of Bangladesh, then said to me, “Don’t worry. We all will stand by you”. Seeing Rev Aritomi’s determined face, I made up my mind. Enthusiasm welled up in me when I heard Rev Aritomi say that we would invite President-designate Kosho Niwano to attend.

When preparations for the conference began, however, some people tried to interfere with us. Many obstacles stood in our way, and I even felt I became a target of potential physical violence. Some acquaintances of mine seemed to become envious of me and tried to disturb the project. I was angered and saddened by the interferences, but Rev Aritomi encouraged me by saying that nothing is more difficult than Dharma dissemination. He told me about the hardship Shakyamuni Buddha went through when he disseminated the Dharma to people in ancient India. He also said that Founder Niwano faced unimaginable difficulties when he endeavoured to establish Religions for Peace in 1970.

Shakyamuni Buddha taught us that the world we live in is filled with suffering and sorrow. Some people act in a self-centred way, speak ill of others, and even do harm to others. It is also true, however, that this world of suffering is none other than the place where we should work for other people’s happiness, just as the lotus flowers grow and bloom in a muddy pond. I realised then that I should be like a lotus flower myself.

One day, Mr Kanchan Barua said to me, “You have a lot of seeds of virtues, but if you harbour anger in your mind, the seeds of virtues cannot sprout”. I took his words seriously and remembered them often. I came to realise that my anger was a real impediment for me.

Six months after we began preparations, the youth group conference was held with great success, with 13,000 young people participating. This was the largest conference of Buddhist youths in the history of Bangladesh. I learned a lot of things from the conference, and many new youth group leaders were born. The name Rissho Kosei-kai came to be known throughout Bangladesh.

The Founder taught us that if you change, others will change. I was able to change when I learned through experience the teaching expounded in chapter 20 of the Lotus Sutra, “The Bodhisattva Never Unworthy of Respect”. In this chapter, the Bodhisattva Never Unworthy of Respect pays respect to and commends everyone he sees, saying that he could never find them unworthy of respect as they would all become buddhas, even though many of them ridicule or attack him.

I learned this teaching when I was receiving practical training in Dharma dissemination at the Nerima Buddhist Centre in Tokyo. Ms Yasuko Kase, chapter head of the Nerima Buddhist Centre, mentored me during my training period. One day, she took me out for Dharma dissemination and we made visits to non-members’ homes. We brought copies of Rissho Kosei-kai’s monthly magazines, Kosei and Yakushin, to present to people who might be interested in them. We introduced ourselves to the residents through the entrance intercom, but most of the time there was no response or they told us they weren’t interested. Others told us not to bother them as they were busy. It was a discouraging experience for me.

During lunch, I asked Ms Kase if she felt humiliated or discouraged when people we visited treated us in an unfriendly manner. That was when Ms Kase told me the story of the Bodhisattva Never Unworthy of Respect. She said, “Connecting people to the teaching is not the sole purpose of Dharma dissemination. Another important purpose is to purify our hearts through it. Some people may have doubts toward our religion and throw unfriendly remarks at us. But we should persevere and continue our efforts to transmit the Dharma. Through the practice of dissemination, we can cleanse our minds by getting rid of our selfish ego and anger”.

As a matter of fact, I possessed a strong ego and often harboured anger. After learning the teaching about the Bodhisattva Never Unworthy of Respect, I began to be capable of controlling my anger little by little. I was pleased to hear Rev Aritomi speak about this during a gathering at the Cox’s Bazar chapter—he said I was able to control my anger better than before. Although I still can’t control my anger perfectly, if I compare my present self with the past self, I feel I have changed a lot and I am proud of myself.

Thanks to my fellow members in the sangha, I have become able to look at myself in light of the Buddha’s teaching. I’ve realised that Buddhism is a teaching of wisdom. I am now practising the teaching by keeping in mind a phrase in “Taking Refuge in the Three Treasures”: “May we, with all the living beings, embrace the riches of the sutras and make our wisdom as wide and deep as the sea”.

I would like to conclude my Dharma Journey talk by making a vow to purify my mind and devote myself throughout my life, as is expounded in the Members’ Vow, “to bring peace to our families, communities, and countries, and to the world”. Thank you very much for your attention.