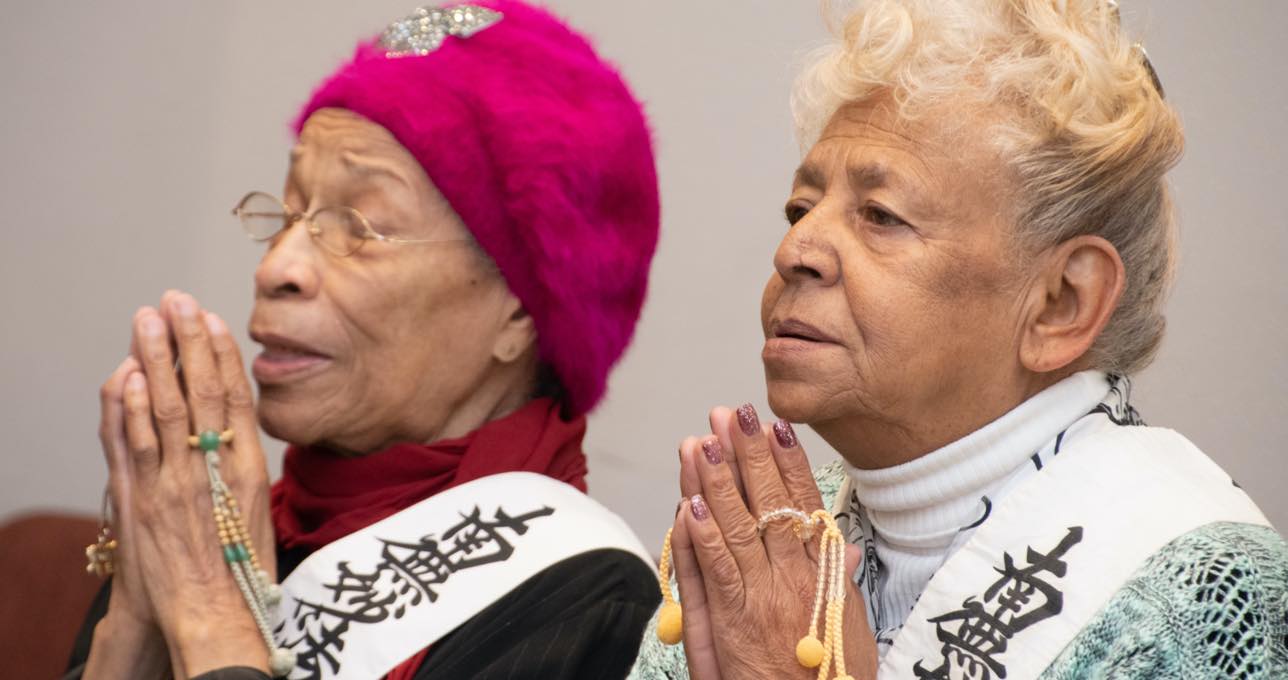 Lives begin and end with Gassho

Some visitors may be impressed, or possibly feel odd, when they are welcomed at the entrance of the centre with Gassho (a gesture of greeting with the hands placed together in prayer).

Lives of Rissho Kosei-kai (RK) members begin and end with Gassho. We do Gassho in the morning when making offerings to the Buddha at our home alters and when exchanging greetings with our families. We also do Gassho before and after meals and when going to bed and saying ‘good night’ to our families. Such a way of life brings peace in mind.

In centres, we do Gassho when seeing others, participating in Hoza, asking Hoza leaders for their Dharma insight and leaving Hoza.

You see ‘putting palms together’ frequently in Buddhist sutras. This means the posture already existed during the Buddha’s lifetime. There are many scenes in the Lotus Sutra where the disciples of the Buddha do Gassho as follows:

They do Gassho to pay respect and reverence to the Buddha from the bottom of the heart. To this day, it is a traditional form for Buddhists to pay homage.

RK’s style of Gassho is called ‘pressing together ten fingertips’ (Jpn., Jisshi So Sho) as described in Chapter 27 ‘The Former Deeds of King Wondrous Adornment’ in the Lotus Sutra. This means, placing the palms together with no gaps between the fingers and thumbs.

What is the significance of Gassho in the view of faith?

We do Gassho to the Buddha. New members may do so asking the Buddha for relief from their sufferings in prayer, which is good. However, the right mind frame of Gassho is to make a vow to give our whole heart and soul into revering the Buddha and practising as taught.

We also do Gassho to members and non-members. It refers to paying homage to something precious that everyone has at the bottom of their heart, which we call ‘buddha nature’. Buddha nature can be briefly represented by the Four Infinitely Virtuous Minds (a heart filled with empathy that desires happiness for others; a desire to liberate others who are suffering; a heart filled with rejoicing for others; and a non-attached state of mind that allows one to let go of things not seeking rewards). We mutually do Gassho to develop our Four Infinitely Virtuous Minds.

In a story from the Lotus Sutra, Bodhisattva Never Unworthy of Respect said ‘I deeply revere you, as all of you will become buddhas’ whenever he encountered people. Because of this, they would get angry saying ‘Mind your own business!’ and strike him with sticks or pelt him with stones. However, Bodhisattva Never Unworthy of Respect would escape to a distance and keep praising them saying ‘I could never find you unworthy of respect, for you will all become buddhas’. And for this reason, people who had mocked, slandered and ridiculed him received and embraced the teachings and finally reached Supreme Perfect Awakening.

As such, people who are seemingly selfish, short-tempered or terrible gossips, will be surely awakened if we believe in them and revere their buddha nature. Many RK members have had such experiences and practise aiming for right lives rooted in buddha nature.

Gassho is capable of totally changing our lives because it enables us to be at one with the Buddha.

Doing Gassho, we can feel like we are enveloped in the Buddha’s hands and attain peace in our minds. While at the same time, we become filled with courage and confidence that we can surely overcome the difficulties we are faced with because we are safeguarded by the Buddha.

When attaining peace in our minds by Gassho, we can have insight. It allows us to observe with a calm mind and make a right judgement in encounters with people who are overwhelmed with grief, are filled with anger and not behaving as we might wish.

RK members practise Buddha’s teachings through Gassho not only to members but also to people all over the world. It forms the backbone of our active promotion of inter-religious cooperation such as Religions for Peace (RfP) and International Association of Religious Freedom (IARF) and other peace activities.