This Dharma sharing was presented on June 4, 2017, at the ceremony celebrating the completion of the new building for the Sri Lanka Dharma Center and the enshrinement in it of the Gohonzon (a statue of the Eternal Buddha Shakyamuni). 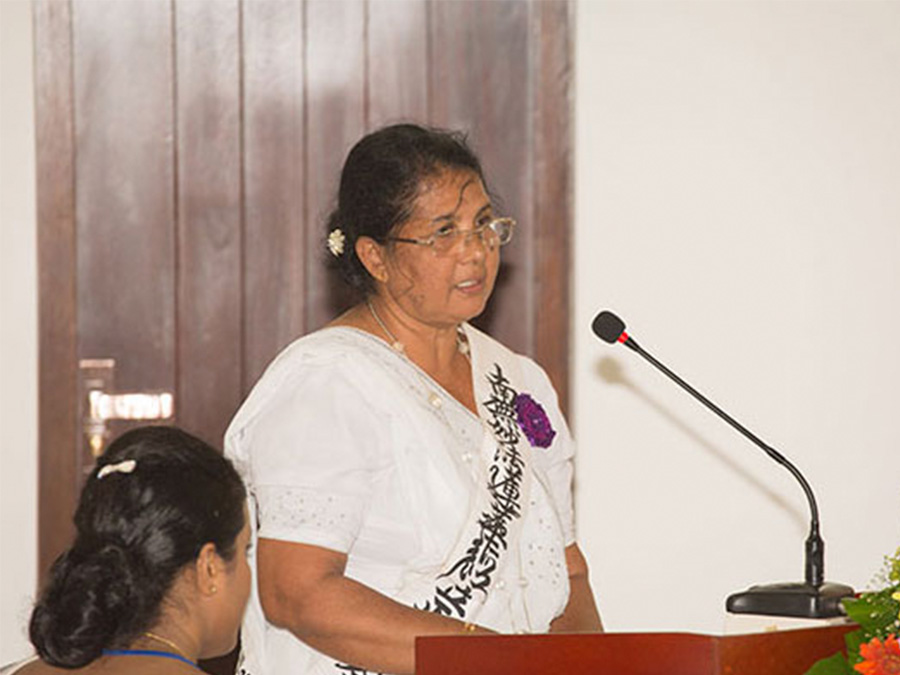 First of all, I would like to express my sincere congratulations on the inauguration ceremony for the Sri Lanka Dharma Center. My name is Daya Madanayaka. I appreciate this opportunity to share my spiritual experiences.

I was born in the Makura village of KegalleDistrict, located in southwestern Sri Lanka. My father was a rice farmer, and my mother helped with my fathers’ job and cultivated vegetables, including sweet potatoes for home use. As the oldest daughter of Dayafamily, I have a younger sister and a younger brother. The three of us had grown up together.

In my native village, there were no fences to divide private land, but just big trees to mark each house. I fully enjoyed a variety of ways to play: outings to the riverside; riding a swing; collecting mangoes, cashew nuts, and rambutans; and many others.

In the garden of my house, we made a small shrine on small pillars and enshrined a Buddha statue in it. We picked flowers and offered them to the altar every morning and evening. I had grown up in such surroundings, blessed with religion and nature. When I was in the fifth grade of elementary school, I passed the national examination which was conducted all over Sri Lanka, and I got a chance to study at a high-level school.

As a result, I left my home and started to live in a school dormitory. As a mere child I felt so lonely, being apart from my family with whom I had lived together for 11 years, but I gradually got used to living in the dormitory. All the dormitory students recited a sutra every day in front of a Buddha statue installed inside the school, and went to a temple to practice meditation on Vesak and Poson Poyadays, which are celebrated according to Buddhist traditions in Sri Lanka. I spent several years in that way, living a life in school. When I was 17 years old, a public official started to work at my school in administration. A little while after graduation, I began going out together with him and got married in 1976 when I was 21 years old.

We lived near my parents’ home. My husband worked at the education department of Kegalle District, while I became a housewife. My life was filled with happiness. In 1977 my first son was born, and next year we moved to Polonnaruwa District for my husband’s transference. We started a new life as three family members.

In Polonnaruwa, the first big ordeal awaited us. One day we had a horrible rainstorm late at night. Roof tiles were swept away, and a big mango tree fell down on my house. Inside my house was a terrible mess, and my husband and I got out of the house with my son wrapped with a bed sheet. We could not walk smoothly due to the strong winds, and I crawled along, holding my son in my arms. We ran into a bread factory, and found that about 80 evacuees were packed there like sardines. Everyone was wet with rain and there was not enough space to sit down, so we just waited for the storm to pass.

After the sky began growing light next morning, we got out of the factory. I found my house so terribly destroyed that I could not even identify it. Some people died because they were pinned under the trees that directly fell down on their houses. We possessed nothing except the clothes we were wearing, but I was truly grateful that we were safe with no injuries. My husband and I lost everything, but strived to cooperate together to live.

In 1980, two years after the disaster, when we were on the mend from the damage of the storm, we had the second ordeal. My husband lost his job because he participated in a big demonstration march by public officers. Four days after he lost his job, my second son was born. At that time, only 65 rupees was all the money we had. We could not support our livelihood because we had lived on the monthly income of my husband. We were supported by friends, relatives, acquaintances, and monks. However, as we did not know when my husband could get a job again, we could not depend on their support as long as we liked. So we began doing various jobs to earn money to make a living.

First, we decided to rent two rooms in our house to others. In addition, we started to sell lunch bags, to grow and sell vegetables, and keep fowls and sell the eggs. We sometimes went to help farmers to cultivate or harvest rice, and later we would get a portion of the harvest. We worked as hard as we could and tried to get income in various ways. While we lived from hand to mouth, my husband was able to begin working at the secretary’s office of Polonnaruwa District. I thought that I should work too, and started working at the same office as my husband. Two years later, my third son was born.

Together, all of our family members were able to overcome these two great hardships, and my husband began to work at a different office due to his promotion. However, after he started commuting to office located far away from our house, his health often turned bad. That is a beginning of the third ordeal.

One day, he fell down with convulsions in his office. After that, he came to have convulsions even when he was sleeping. Due to my husband’s illness, my three children and I often suffered financially and psychologically. My husband was likely to express his anger without any reason. He shouted at me and my children, shut us out of the house, and threw out children’s books and clothes while they were studying. He seemed to become another person, but sometimes he behaved in a gentle manner as before; he went out to play with the children, came home with a souvenir, and calmly read books. The rest of us were surprised to see his unusual changes. I could endure the situation, but I understood that it was mentally not good for the children.

I told my children, “All family members should cooperate to solve our problems together”; “All you can do at this moment is to study hard and pass the national examination”; and “I will take care of your father and protect him.” My children accepted my words, studied as hard as they could, and passed the examination. I also had a promotion examination in my job and passed it. My husband was getting better little by little. Although I sometimes shed bitter tears on one hand, I came to feel a sense of relief and security on the other hand.

In 2000, we had a good time in my home and my husband’s parents’ celebrating the New Year according to our Sinhalese tradition. After we came back home, my husband had a spasm at midnight and passed away in a hospital. He was 49 years old. After I conducted his memorial service for the third month after his death, the strain made me fall down. Later, I thought of how I should live thereafter, and I was determined not to marry again for my children’s sake, but to study more for a better job. I started to go to university to pursue a degree.

During my service of nearly 30 years, Iworked very hard as a mother and a public officer. Meanwhile my children tried their best to study, then they married and had children.

After I retired, I was guided to the faith of Rissho Kosei-kai by Ms. Kusuma, and became a member in 2014. When I visited the Dharma center of Polonnaruwa for the first time, I saw a golden statue of the Buddha, and a gong and a wood block like musical instruments as well. I suspiciously thought to myself, “What kind of facility is this? I may be in a weird place,” but I decided to believe Ms. Kusuma, because I knew that she was a reliable person.

As representative of the city government, I had repeatedly participated in its council that was established to protect Theravada Buddhism and the monks in PolonnaruwaDistrict. So I checked Rissho Kosei-kai of Sri Lanka at the council, and I knew that it is officially registered in the government and observes regulations properly. Rissho Kosei-kai teaches us how we lay Buddhists can sympathize with others’ sufferings and how we can work for other’s happiness along the bodhisattva way in our daily life. In addition, I learned the teachings of Rissho Kosei-kai through seminars in Colombo and Bangkok as well as a booklet of the Dharma center.

Presently I am a leader of a home-based Dharma center, and regularly I hold a hoza (a Dharma circle) meeting in my home. A lot of people participate in it, including my parents, my sons and their family members, my relatives, neighbors, and so on. Rev. Yamamoto, Dharma center’s minister, and Mr. Percy, a chapter leader, visited my house for hoza. In hoza held in the home-based Dharma center, we learn the following five teachings that we practice in our life: (1) We have a high regard for Buddhist temples and monks; (2) We visit a temple to deepen our faith on the day of full moon; (3) We understand that we are as one with the Truth; (4) We guide others to the right way by practicing the bodhisattva way; (5) We feel the Life of the Buddha, or the Truth, within ourselves.

Thanks to the teachings of Rissho Kosei-kai that I learned, I came to take the three great ordeals in my earlier life as the precious gifts from the Buddha. Further, I could be aware that my life to date was the best for me. That is because many hardships in my life helped me recognize the “benevolence” that leads us to thinking of suffering people, as well as the “compassion” that enables us sympathize with others’ pains and sorrows. Thanks to my experiences, I am provided with the wisdom for liberating many people from sufferings.

Today, I would like to pledge myself to do my best for the bodhisattva way so that I can make use of my wisdom to liberate suffering people close to me for the rest of my life. I conclude my speech with words of gratitude to my parents and my awesome children, who were born to me and my husband and had shared sufferings with us. Thank you very much, the Buddha, and everyone. 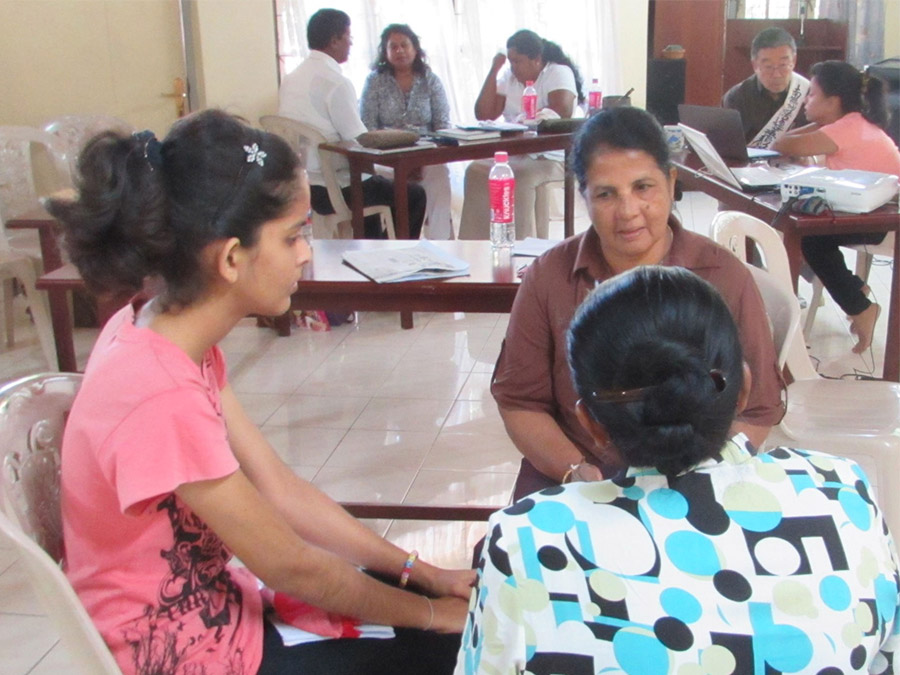