This religious testimony was delivered at the Zen-yukai ceremony,
the gathering for the seminary students, held on May 2 by Gakurin seminary. 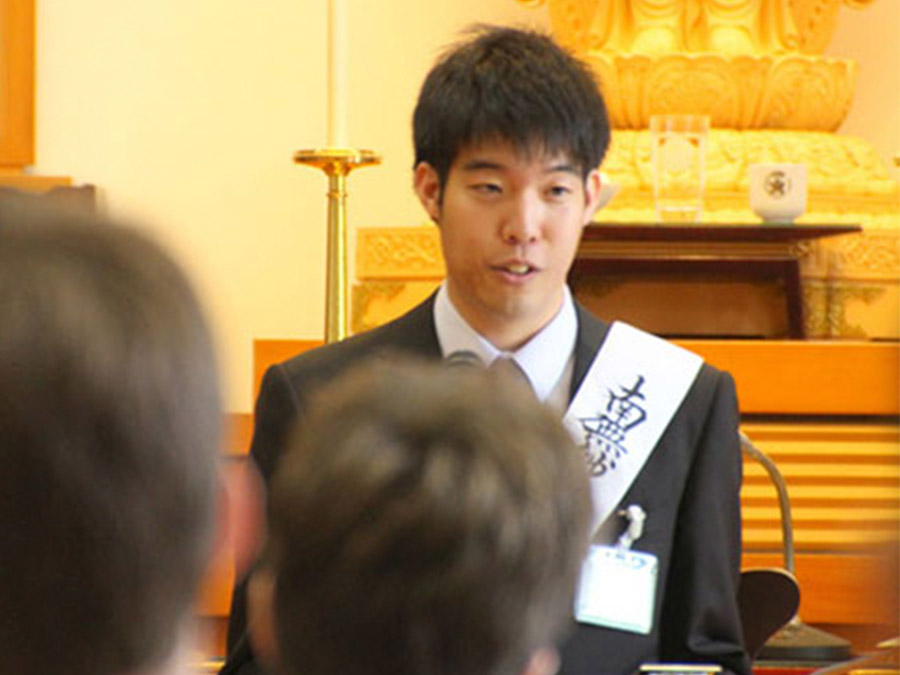 Mr. Keisuke Sano testifies his faith at the Zenyu-kai ceremony.

This religious testimony was delivered at the Zen-yukai ceremony, the gathering for the seminary students, held on May 2 by Gakurin seminary.

Before I came to Gakurin, I had lived in Fukui Prefecture, which is northwest of Tokyo and faces the Sea of Japan. There are five people in my family—my father, mother, elder sister, elder brother, and me. We have been members of Rissho Kosei-kai since my great-grandmother joined. I am the fourth generation following the faith. My mother has frequently taken my siblings and me to the Dharma center since the time we were children. We grew up among Sangha members.

It has been over a year since I entered Gakurin seminary. I have learned a lot of precious things and experienced many realizations in the past year. The most important thing that I learned was that my parents had always loved me and that I’d always been my parents’ concern.

From childhood, I had been unable to depend on my parents. My family was poor, so I was put up for adoption when I was an elementary school child. When I turned fifteen years old, I went back to my parents’. But I felt a distance between my parents and me, and I had no idea how I should interact with them. I thought that my parents put me up for adoption because I was an undesired and unnecessary child. I became obsessed with the feeling that my parents were always comparing me with my brighter brother. This feeling fanned my hatred of my parents, and I refused to talk with them. I concealed my true thoughts.

I fell into bad company at my high school, and I became antagonistic and bellicose. I dyed my hair silver like other bad boys did. I stopped going back to my home. I took to delinquency and acted bad, because I was eager to get my parent’s attention and concern. But at the same time, there was always a lingering feeling that really didn’t trouble them, so I wanted to stop doing bad things. These conflicting emotions were always in my heart. Because of this, I never felt comfortable. Above all things, I hated myself for having such emotional turmoil.

The then-minister of the Dharma center kindly reached out to me and helped me get out of such a situation. He attentively listened to me as my painful feelings spilled out, feelings that I had been almost unable to handle. He said with great consideration, “You are considering everything in a pessimistic way, as if you were some kind of tragic hero, but you just don’t realize that there are people living with much harder burdens.” And he suggested to me that I should carry out the tedori practice of visiting members’ homes in order to talk with them. Tedori is one of the important practices of Rissho Kosei-kai, in which we meet members in person to learn their recent situation and encourage them to come to the Dharma center’s activities. Through the practice, I realized that I am not the only one that has such bitter experiences. Then little by little I came to trust people. However, the relationship with my parents still remained unimproved.

Thereafter, I fortunately graduated from university and was given a chance to learn at Gakurin seminary. Honestly, I felt relieved,because I would be able to live apart from my parents. But after I entered Gakurin, they called me frequently. I thought that they did so out of their loving concern for me, but it made me feel irritatednonetheless. In addition, I had been sending money home to help to support the family. My family is still in need. I did it reluctantly, but I felt it was necessary. My parents expressed their thanks, but it somehow sounded suspicious to me.

Around this time, a two-month training session at a local Dharma center for first-year studenst began. I had more chances to carry out the tedori practice. The members I had visited were having trouble with their family members. I sincerely wished to liberate them from those troubled situations. I really wanted to see their conditions transformed so they could find a way out of their problems.

However, I suddenly wondered why all the members I had met during the session were suffering from family problems, so I went to see the minister and asked him for Dharma guidance. He said, “Every person you meet in the tedori practice is a Dharma connection that serves as a mirror reflecting your heart.” Then I recognized that it was I who should be the first to try to restore my family relationship.

Then the minister suggested to me that I talk with my parents, saying, “Why don’t you reveal your true feelings to your parents? I think they are waiting for you to do so.” With his guidance in mind, I went back to my parents’ home in Fukui Prefecture. It had been a long time since I had spoken face to face with my parents, and it made me very nervous in front of them. I said, “You always cared about my brother and never looked at me. I have been lonely since my childhood. I tried so hard to become the one that you desired me to be, but I just couldn’t. So I thought that I was undesired and unnecessary.” I could finally convey my honest feelings that I had held inside for so long.

I thought that they would say something hurtful in response, but they said, “We never knew that you have been holding such sorrow in your heart.” They also said, with smiling faces, “Thank you for sharing your true feelings with us.” As soon as I heard them say those words, everything that I had been holding inside–loneliness, grudges, and distrust towards my parents–vanished in a moment. We spent three hours enjoying our openhearted conversation.

My father said that after I left home for Gakurin, he had often cried because he missed me so much. I finally found out why my parents had called me many times. My mother said, “Of course we have always loved you and have watched as you grew. We know that you were always diligent in whatever you did and that you had been quietly patient, considering our family.” Through listening to them, I found out that throughout my life, I had always been supported and raised in the deep love of my parents.

I had made myself a tragic hero, being pessimistic about my life. I had been biased against my parents. I had never even tried to consider my parents’ feelings. To be honest, I had really always lovedmy parents. I realized that because I loved them, I wanted them to understand my loneliness. I saw clearly how my loneliness had turned into hatred. I finally became honest with my feelings after coming here to learn at Gakurin seminary.

Now I know that my perspective had become twisted and that I had lacked gratefulness; now, my aspiration is to become a warm person who can easily express gratitude towards others. In conclusion, I would like to say that my experiences at Gakurin have allowed me to realize that I would like to help people suffering from family problems or seeking their true selves.