This Dharma Sharing (Spiritual Journey) speech was presented at a Members’ Gathering at the Bangladesh Dharma Center on April 20, 2018. 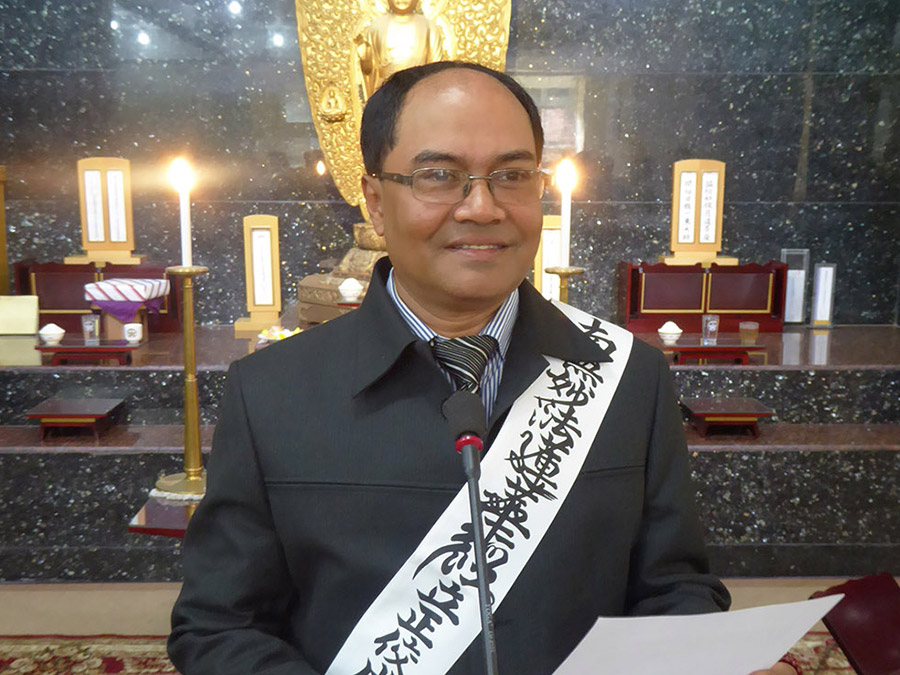 Everyone, please guide me.

My name is Bimal Kanti Barua. I happily live with my wife, and a daughter and a son. Currently, I am serving as chapter leader of the Chittagong South Chapter.

First, I would like to express my appreciation toward Rev. Mitsuyuki Aritomi and other leaders of the Bangladesh Dharma Center for giving me this opportunity to share my Dharma experience, which has allowed me to reflect anew upon myself.

I would like to express my gratitude to Mr. Biplop Barua to start off this Dharma experience. In 2000, he mentored me and taught me about the wonderful Rissho Kosei-kai. He took me to Mr. Biman Kumar Barua’s house in Patharghata, Chittagong. I would also like to express my deepest gratitude to Mr. BimanKumar Barua for his initiative in spreading Rissho Kosei-kai’s teachings in Bangladesh.

Many members who participated in activities together in the early days of the Bangladesh Dharma Center have since passed away. I am truly grateful that I have been able to stay healthy and continue my duty today.

I have lived in Japan for a long time because of my work and my interest in Japan continued even after I returned to Bangladesh. I could not understand Rissho Kosei-kai at the beginning. However, by looking at members’ activities, I began to understand that even if you are unexperienced, or you are not a cleric, you are still able to convey the teachings to others; and I came to understand that Rissho Kosei-kai is a wonderful organization.

I was a newlywed when I first joined RisshoKosei-kai. My wife and I went to Singapore, Thailand, Nepal, and India on our honeymoon. While we were in Nepal, I met with Mr. Sailendra Bajracharya, chapter leader of RisshoKosei-kai of Kathmandu. He taught me many things about Rissho Kosei-kai. On our way back to Bangladesh, we stopped by my relative’s house in Kolkata. While we were there, I shared with my relative the teachings I had learned. Thereafter, that relative also became a member.

I came back from our honeymoon to find a guest from Japan, Mr. Kazumasa Iizawa, who had visited Bangladesh. That was my first encounter with Mr. Iizawa. Since I could speak a little Japanese, I began to accompany Mr. Iizawa on Dharma dissemination as his interpreter. When the members of Bangladesh exceeded three hundred, Mr. Iizawa asked the Headquarters in Tokyo to purchase a land for a hoza center for local members. When we were searching for the land, I met Mr. Sanjit BaruaBulu, who introduced the land to us. He is now deceased, but he always helped me a lot while he was alive.

Before I joined Rissho Kose-kai, I was a type of person who thought I was always right and my understanding was always correct, which led me to argue with people on many occasions. I also had opinions about disagreements among the tenets of different Buddhist sects. After I joined Rissho Kosei-kai, however, I came to realize that there was no need to discuss which teaching is more correct. While every sect has its own teachings, I learned that in RisshoKosei-kai you can start with whatever things you find you are able to practice. As I gradually came to understand it, I became willing to learn the teachings more deeply.

Just around that time, Mr. Kanchan Barua, who had studied the teachings and Dharma dissemination in the Gakurin Seminary’s International Course at Rissho Kosei-kai’s Headquarters in Tokyo, finished his study and returned to Bangladesh. I learned from him many things about the teachings and ritual etiquette of Rissho Kosei-kai. I was truly impressed by what I learned then, and the desire to share the teachings to as many people as possible grew inside me. Later, I received the Gohonzon, and the certification of the Dharma teacher. I started as an area leader and I am now serving as a chapter leader.

Through my roles at the Dharma Center, I realized how difficult it was to share the teachings with other people. It also made me realize that life is not filled with only good things, and it’s not always glamourous. I finally understood that as human beings, we are bound to face all kinds of difficulties as long as we live. From what I have experienced in my own life in this regard, I would like to share one with you.

This was my experience when I was running a factory that manufactured clothing. Our business was not doing well due to many factors, and I was in heavy debt. No matter how hard I tried, I couldn’t find a solution to solve the problem. I felt like everything went pitch dark in front of me. As our income was extremely small, I even found it hard to keep my family together. On top of all this, another even more serious problem suddenly arose. Some time before, my brother and I had a house built for us to live in. Suddenly, my brother told me if I wouldn’t pay half of the construction fee of the house soon, he would sell off the house. I was out of my mind, trying to figure out how to keep our house, and I was in despair. At such times the sangha members of Bangladesh were always by my side and supported me.

Thanks to their warm encouragement and support, I began to feel a little relieved. I participated in a lecture of Rev. Aritomi, which was held at the time. During the lecture, he spoke about his own experience of being in debt.

Rev. Aritomi said, “It is natural that things do not go as we wish. That is why instead of spending time on thinking about what you should have done in the past, valuing what is in front of you is more important for your future.”

Referring to river streams, he said that when dirty water comes from upper stream, if the water becomes clean midstream, the dirty water will not go downstream. The same goes for our past experiences. If we make the most of the present moment, there will be a wonderful future waiting for us.

Listening to what Rev. Aritomi had to say, I felt I saw a light of hope in the dark. I began capable of thinking that I would treasure the present moment and tackle the problems before my eyes. I was also blessed with wonderful sangha members. Thanks to their kindness toward me, I was able to get back on my feet again.

Although I still have a lot of debt, I don’t get irritated anymore. Thanks to the teachings, I learned that all things happen to help us grow. I am thankful from the bottom of my heart for the sangha members who supported me when I was in trouble.

Please let me express my gratitude for Founder Niwano, who has established this wonderful Rissho Kosei-kai. Thanks to the organization, I was able to encounter these truly wonderful teachings. I began a further effort to disseminate the Dharma to share the teachings with as many people as possible. I was able to guide to Rissho Kosei-kai’s teachings many people in my home town of Chendirpuni, in Chittagong, and in Dhaka. I have guided more than a hundred people to the faith up to this point, and I hope to continue guiding many more.

It was a great delight for me that a hoza center was built at Chendirpuni where I was born and raised. I am also really happy to hear that the Dharma dissemination has been growing in Kolkata and Bodhgaya in India and in many other places. These wonderful news about dissemination remind me of the times when Rev. Teruo Saito, then the minister of South Asia Division, sent me to do Dharma dissemination in Kolkata, for which I was collaborating with Mr. Suman Barua of the Kolkata branch. Later, Mr. Suman Barua came to Bangladesh to receive the locally-bestowed Gohonzon, which was enshrined in his home in Kolkata. I have visited Kolkata three times, where I have guided thirty-six people. I think it is really wonderful that Kolkata branch has become a chapter and Mr. Suman Barua became the chapter leader. I would also like to thank Mr. Suman Barua’s father and his sister Ms. Susmita Barua for their kindness, from the bottom of my heart.

It is not enough if we are the only ones who are happy; we have to think about other’s happiness too. So that everyone can achieve true happiness, I will keep the Founder’s spirit in my mind and share the teachings with more and more people. Recently, Rev. Aritomi gave us the guidance to show appreciation for our senior leaders and members preceding us, and help connect more people with the Buddha toward the twentieth anniversary of the Bangladesh Dharma Center. I would like to take a vow to devote myself in Dharma dissemination furthermore as a member of the Bangladesh Dharma Center. 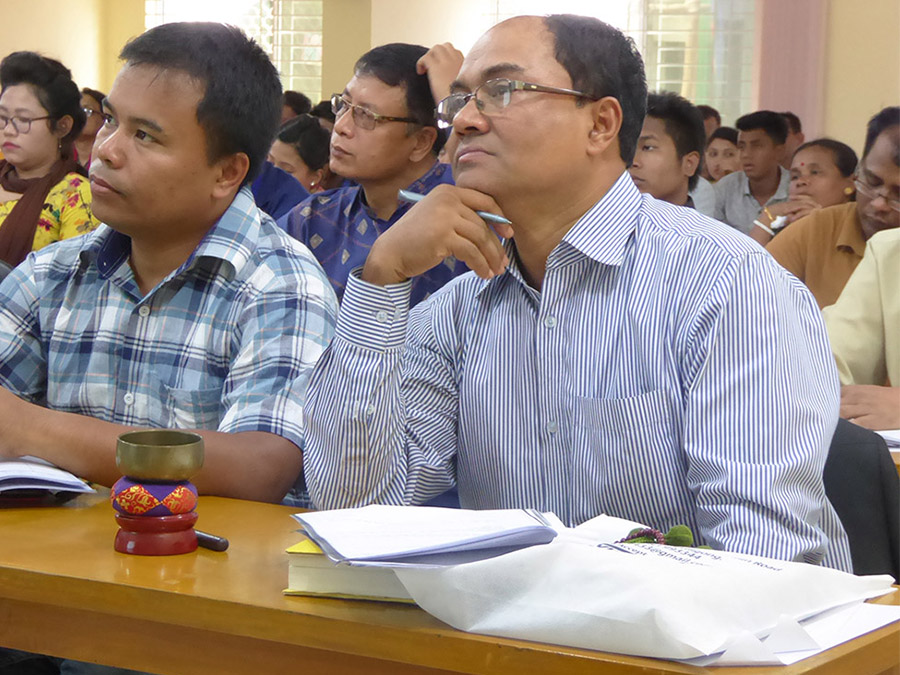