The Sangha That Guided Me

This spiritual journey was contributed to Living the Lotus. 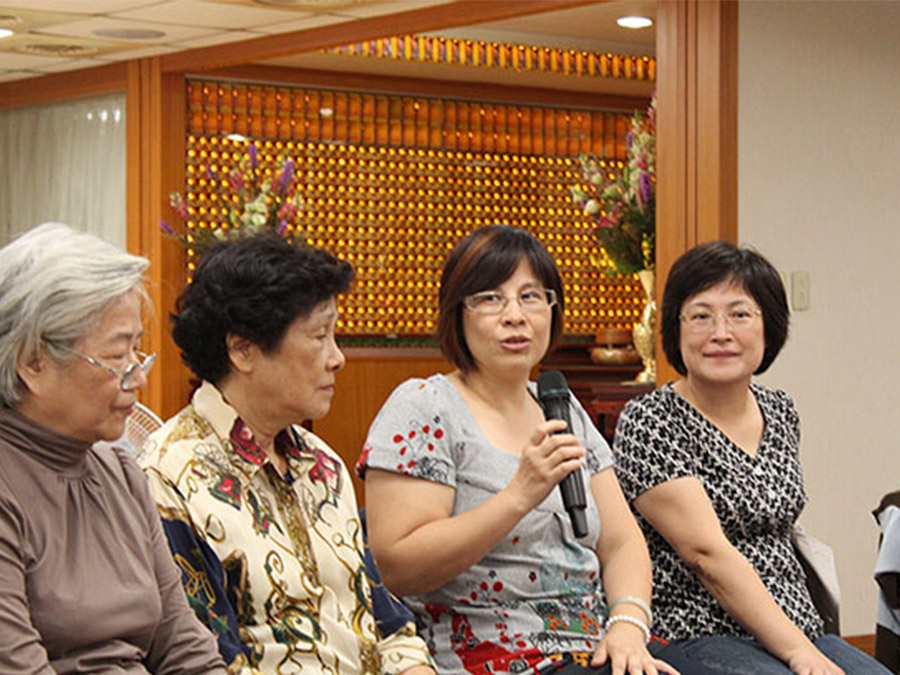 Ms. Chen Yu-Lian, second from right, in the Hoza.

I am a mother of two children—the nineteen-year-old son and the seventeen-year-old daughter. I have known Rissho Kosei-kai for nearly twenty years. I had joined the Dharma Center’s activities, taking my children with me, and my children had also performed various assigned responsibilities, such as the one of dedicating offerings to the Gohonzon in the ceremonies. Just visiting the Dharma Center to pay homage had given me a great joy, but I had never wished to become a member of Rissho Kosei-kai.

In the last few years, I had hit rock bottom emotionally, due to the death of a family member and my divorce. Because I had been in such situation, I always criticized people around me without seeing my own faults, so my relations with my colleagues and my family grew tense. The relationship between my daughter and I was especially unstable.

Under such circumstances, Rev. Chien, minister of the Dharma Center, and my elder sister invited me to join the Family Gathering Day at the Dharma Center. I’m really grateful to them for that. In the Hoza session, I had an opportunity to share my worry about my daughter’s going up to college. The participants of the Hoza were patient in listening to me carefully and shared their own experiences earnestly. They taught me the ways to understand and maintain a relationship with my daughter. So I felt relieved, and I was surrounded with warmth and sincerity. The Hoza leader not only gave us the solutions to the problems raisedby each of us in the Hoza but also taught us how we should put into practice the teaching of the Buddha in daily life.Through the Hoza practice, I wondered, “I had been too harsh on my daughter and that caused the tension and created a barrier between us.” Hence, I also deeply realized that because worries and sufferings all originate in myself, it is important for me to reconsider my way of living in order to remove them. I suddenly realized that the Buddha’s teaching is understandable and adaptable to everyday life, and that we can practice it anytime and anywhere. Therefore, I finally joined Rissho Kosei-kai and officially became a member.

Although it hasn’t been long since I became a member, I have diligently participated in the Dharma Center’s activities. Through sutra recitation at the Dharma Center and the Hoza, I have learned Rev. Chien’s Dharma guidance and the Buddha’s teaching that senior members and leaders of various groups would share with me. I thought I should make use of what I have learned for the sake of removing my worries. Once again I felt that this is the Buddhism in daily life. I felt really blessed that I was able to attend the appointed Dharma Teacher education program. What impressed me most in the lecture was that the Hoza is a place where worries and sufferings of the participants will be removed by having a flexible attitude like that of a bodhisattva as well as by the wisdom of the Buddha, and that it is not a place of chatting. I now again understand why members like the Hoza most.

Because of the Buddha’s wisdom, I am able to rid my ignorance and have a further understanding of the Buddha’s teaching, Rissho Kosei-kai’s basic practice, and the meaning of the founding of Rissho Kosei-kai. Even before I became a member of Rissho Kosei-kai, I had respected the Buddha, but I didn’t wish to learn more about the basics of religious belief. I just thought I should not hurt people and that I should maintain a good mind. In the interaction with my daughter, when she expressed her opinion that I could not accept, I do not object to it immediately but I can think of her from the standpoint of her. I now do not look at things pessimistically, and I have been relieved. As a result, my hatred against my former husband disappeared, and now I can wish for his happiness.

Since I encountered with Rissho Kosei-kai, I have seen elder members and the core leaders making the untiring efforts, being devoted to practicing and disseminating the teaching, and being concerned about both members and nonmembers alike, regardless of age. Unconsciously I have acted like them. Such an attitude gradually became part of me, and I have been calm in mind when I get in contact with my daughter at home, and my boss and colleagues in the workplace. At the same time, I have changed in working on things. Because I now begin things after careful thought, they go smoothly. I can feel the atmosphere at home gradually getting better. My interactions with my daughter are becoming smoother, and my relations with her have become closer than before.

I could not share my own sufferings with people before. Through the guidance from members and Rissho Kosei-kai’s teaching, I learned that I should actively approach to people, convey what I have studied to them, and try to have good influence on them. Through studying the teachings of truth of causation and of cause and effect, I learned that I myself should have good ways of thinking first, and then I will be able to guide others to a right path. Though I am not as devoted and active as the minister and the core leaders, I would like to make an effort to walk the Buddha Way together with other members.