The Joy Attainable by Seeing Things as They Are

This Dharma Journey talk was presented at the memorial day ceremony held at the Ulaanbaatar Chapter on April 15, 2018.

Ms. Ariunaa shares her Dharma Journey with members at the Ulaanbaatar Chapter.

I am pleased to have this opportunity to share with you my spiritual journey on this auspicious occasion of the memorial day for Shakyamuni Buddha. My name is Bataa Ariunaa. I was born in 1966. I have two daughters. I specialize in food development and have a qualification as an accountant. I encountered Mrs. Zorigmaa, the head of the Ulaanbaatar Chapter, in 2005, which gave me an opportunity to join Rissho Kosei-kai. Invited by Mrs. Zorigmaa, I participated in memorial day ceremonies and events of the Ulaanbaatar Chapter a number of times. At first, however, I did not intend to become a member. I had been indifferent to religion since I was young, and did not believe in the existence of buddhas. Soon after I graduated university, I even argued with a monk of Gandantegchenling Monastery about whetheror not buddhas exist. Soon after I had completed the course of the department of philosophy at the university with perfect score, I became haughty enough to believe I knew everything. As I recall those days now, I feel deeply ashamed of myself.

While participating in Rissho Kosei-kai’s ceremonies, my understanding of the teachings gradually deepened, and I came to realize the magnificence of the teachings, which aimed at “practicing putting others first,” “developing our own personality,” and “leading all people to happiness.” Then I found myself attracted to heartfelt interactions among the sangha members and hoza (Dharma circle), and began to look forward to the next events for the members. In 2009 I became a member of Rissho Kosei-kai.

Soon after I joined the organization, Mrs. Zorigmaa appointed me as head of educational affairs of the Ulaanbaatar Chapter. I turned down the appointment, saying that as a new member I had not yet had understanding of the teachings, and that there were a lot of things I did not know. Mrs. Zorigmaa told me that it was important to practice the teachings at the same time as I was learning them, instead of doing so after having learned them. Receiving her guidance, I decided to accept the appointment. I have since engaged in dissemination and teaching the ritual etiquettes of Rissho Kosei-kai at the Ulaanbaatar Chapter and other local branches. I have also been working on a project to support the training of nurses in Mongolia, which was launched by Rissho Kosei-kai headquarters in Tokyo, recruiting and training students. I have also served as accountant at the Ulaanbaatar Chapter, and area leader of the Bayangol district of Ulaanbaatar.

When I participated in the leaders training seminar held at the Tokyo headquarters in 2011 and 2012, I made friends with wonderful bodhisattvas from around the world. I was moved by the attitude of the participants from other countries, who were always willing to accept everything according to the Buddha’s teachings. I wished that I could become a person like them.

In October 2017, I received the Dharma teacher certificate and was chosen as a member of the team who would prepare for the ceremony enshrining the Gohonzon (the focus of devotion) at the Erdenet Hoza Center, some 350 km away from Ulaanbaatar. Through this role, I feel I am receiving the opportunity to take a deeper look into myself.

On July 1, we had the Gohonzon enshrined at the Erdenet Hoza Center. To prepare for it, on May 8 and 9, the four of us—Mrs. Zorigmaa, Mr. Zorigt, the chapter accountant, and I—went to the Erdenet Hoza Center. When we arrived at the center, the area leader remained seated on a chair and didn’t seem to welcome us. When we recited the sutra, I felt uneasy, since the area leader did not join us, but was instead doing something different. When the recitation service was over, I asked her the current situation of Dharma dissemination of the center and the dynamics of the membership, as well as the center’s finance and accounting. That moment the expression of her face suddenly changed. She then spoke to us, “We have been learning the teachings properly and doing our best to fulfill the assigned responsibilities. Why you don’t try to recognize our efforts? When the deputy director Rev. Hirose visited us from the headquarters, she encouraged us and gave us words of praise.” I was displeased by what she had to say and criticized her in my mind, thinking that it was normal to stand up and welcome guests who came from a great distance.

At that time, however, I remembered President Niwano’s Dharma guidance: “We must see things as they are without judging right or wrong” and “We should try looking at things from different angles and finding good points in others.” When I regained a sense of calmness, I looked around at my surroundings, and I noticed that on that day the area leader was taking her grandchild to the center. She may usually join in the recitation service, but she couldn’t do so that day, as she had to take care of her grandchild. I also thought that the area leader had spoken that way because she was anxious that the amount of donation at the center was not satisfactory. When I understood these things, I became able to appreciate her daily effort and revere her buddha-nature.

In fact, when I went to the Khuvsgul branch in March for dissemination, we had a similar experience. As I had not met the person who was in charge of the branch, I was wondering what kind of person she was as I traveled there. To tell the truth, in the background of that dissemination trip was a mission I was assigned by Mrs. Zorigmaa. Last year, the person in charge of the Khuvsgul branch expressed her hope to take part in the Oeshiki One Vehicle Festival. However, as she was being treated for cancer at the time, Mrs. Zorigmaa was concerned about her health, and advised her not to participate in the festival that year. Mrs. Zorigmaa’s guidance seemed to hurt her feelings, however. After that, the person in charge of the Khuvsgul branch began to make phone calls to the Ulaanbaatar Chapter to express her desire to resign her position. That was why Mrs. Zorigmaa asked me to look at the situation of the branch before I left for Khuvsgul for dissemination.

When we arrived at the Khuvsgul branch, the person in charge of the branch remained seated in a similar manner that we would later experience at the Erdenet Hoza Center. As I believed that it was normal to stand up and greet reverently when you have guests from distance, I was at first bewildered by her way of dealing with us.

However, I tried to look at good points in the person in charge of the Khuvsgul branch, and I told her the things about here that I thought were wonderful. Then, together with her and seven other members of the branch, we held a service, praying for her complete recovery from illness. I noticed that her countenance was gradually becoming calm. I was pleased to learn that, after I returned to Ulaanbaatar, she called Mrs. Zorigmaa, telling her that she would continue serving as the person in charge of the branch.

At the Ulaanbaatar Chapter, I am now serving the role of accepting the application for posthumous names from members and reciting the sutra during the ceremonies to enshrine the Gohonzon at members’ home altars. I used to give priority to my convenience when the enshrining ceremonies would take place. But now, I prioritize my role in the faith over everything else, and if there are members who ask for posthouse names for their family or relatives, I arrange to submit applications to the headquarters at once and forward to them the posthumous names as soon as they arrive from the headquarters. I also came to have desire to hold memorial services myself for the deceased. Whenever I hear people who received the posthumous names express their appreciation and say they were glad to hold devotionals for the deceased, it warms my heart.

Last year, because of several unforeseen reasons, I was late in forwarding a posthumous name to a member of the Erdenet Hoza Center. During the dissemination trip to Erdenet, I handed the posthumous name to the member and apologized for the delay, and held the memorial service for her ancestors together with her. After I came back to Ulaanbaatar, I was very happy to hear that the member was grateful for receiving the posthumous name and continued holding devotionals on memorial days.

As I was introverted and was not good at communicating with others, for a while after I joined Rissho Kosei-kai, I couldn’t easily express gratitude for other people’s kindness. When I found people who were having the same difficulty, I wished to help them, but I was too shy to take action.

It will be ten years next year since I first became a member. Thanks to learning the teachings and participating in Dharma circle many times, I no longer feel any distress in expressing my feelings. For example, when I found a person who was short of bus fare and in trouble, I did not hesitate to pay the shortfall for him. I don’t feel ashamed about offering my hand to people in trouble any more. I am also sharing the Dharma with the hope that as many people as possible become happy through the teachings of Rissho Kosei-kai.

Up to this point, I have introduced Rissho Kosei-kai to five people and have taken them to the Ulaanbaatar Chapter. However, because they have been busy with work, they haven’t come back to the Dharma center, although I invited them many times. As it took a long time for me to join Kosei-kai, I would like to accept the way they are and keep watching over them warmly, while inviting them occasionally to the Dharma center, until the time arrives when they become willing to learn the Dharma.

On the occasion of holding a ceremony to enshrine the Gohonzon in the Erdenet Hoza Center, the Ulaanbaatar Chapter made a special donation box to express all members’ unified support, and I am taking the initiative in asking members for donation. Moreover, the Ulaanbaatar Chapter accepted two members of the Erdenet Hoza Center who were going to take part in the invocation ceremony to be held at the headquarters; I recited the sutra together with them, and instructed them on the ritual etiquette of Rissho Kosei-kai. I hope I can continue to be a help for the area leader of Erdenet to the best of my ability while always being considerate of her feelings.

Thanks to the teachings, I have become more cheerful than before and my mind is calmer now. I hope I will continue to learn the teachings and put them into practice. I would like to express my heartfelt thanks to Mrs. Zorigmaa for guiding me to this wonderful Way. I would also like to thank all sangha members, who have always supported me, from the bottom of my heart. 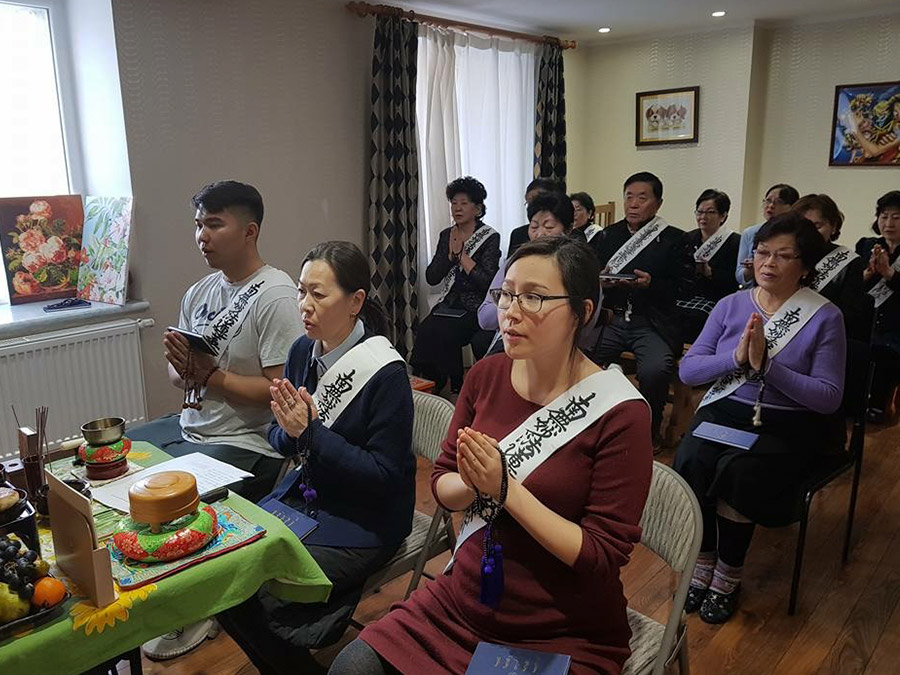