The Importance of Meeting People with a Sincere Mind, Which I Learned in Gakurin Seminary

This Dharma Sharing (Spiritual Journey) speech was presented at the ceremony of the Uposatha Day at the Great Sacred Hall on March 1, 2018. 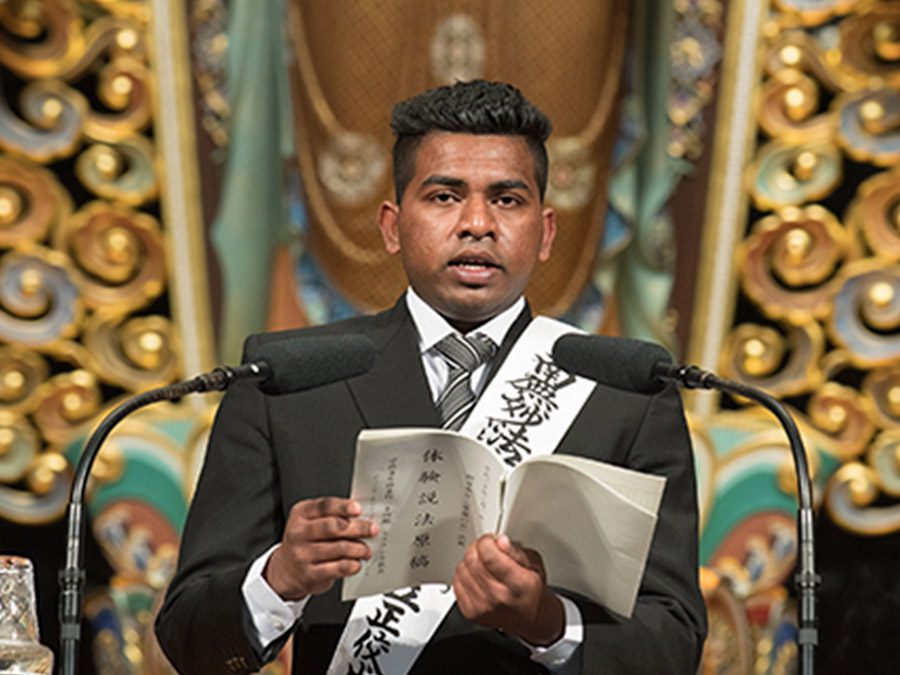 I was born in the village of Welmilla in a suburb of Colombo, Sri Lanka’s capital, in 1994. We are a family of five―my parents and two younger brothers.

I changed schools twice before I entered high school. At my third school I was bullied by upper-class students, who often threatened me and stole my money. Going to school was distressing for me. I could not control my anger toward them, and I decided to be stronger to revenge them. So I joined a military training club in high school to train my body. I spent the rest of my high-school days fighting with my former bullies. During the three years after I graduated high school, I changed my job six times, because of low wages. But none of them went well. When I was feeling anxious about my future, my cousin introduced me to Rissho Kosei-kai.

The youth group activities of Rissho Kosei-kai were fun and I started to participate in hoza, too. At first, I only listened to other people talk. Seeing the youth group members honestly express their true feelings in hoza meetings, however, I gradually began to be able to talk about my behavior when I was a high school student; I was able to discuss these things with a sense of security. All the members of the sangha were people who found joy in giving help to others without thinking about their own convenience. In the meantime, I became aware that, thanks to my fellow members, I had also become a person who was able to care for others and worry about them.

Every time I visited the Dharma center, Rev. Yoshihisa Yamamoto, the minister of the center, and Ms. Palipana Nisansala Ruklanthi, a staff member, gave me various roles, such as cleaning the center, offering at the Buddhist altar, serving as a co-chanting leader of the sutra recitation, managing the budget of youth group activities, and planning the activities of the youth group. I was happy to be trusted by other members, and I earnestly performed the assigned roles, so that I would not betray their trust.

Two years after I joined Rissho Kosei-kai, I was appointed as head of the youth group of the Sri Lanka Dharma Center. I was not confident that I could perform the duties satisfactorily, but the youth group members encouraged me, saying “Don’t worry. We are always with you.” Thanks to their support, I was able to perform the duties of the role until I came to Japan to enter RisshoKosei-kai’s Gakurin Seminary.

At the Gakurin Seminary, I learned a lot of things. Speaking of the things I learned, I would like to talk about what I experienced during my Dharma dissemination training at the Fuji Dharma Center in Shizuoka Prefecture.

One day, I visited Ms. A’s home with two members of the Dharma center. They told me that Ms. A had once been an area leader but now she didn’t come to the Dharma center. We didn’t know whether Ms. A would let us in and perform sutra recitation before the home altar.

The members whom I accompanied introduced me to Ms. A at the entrance, saying, “He came from Sri Lanka and now stays at the Fuji Dharma Center for Dharma dissemination training.” I had heard that when Dharma center members visited her house, Ms. A usually greeted them at the entrance but would not let them enter. At that time, however, she was pleased to learn that an overseas member had visited Japan to study Rissho Kosei-kai’s teachings, and kindly let us in.

When we asked Ms. A if we could hold a sutra recitation service she kindly prepared the home Buddhist altar for the service. The members I accompanied suggested that I serve as the chanting leader. Thanks to this, I was able to serve as the chanting leader in Japanese for the first time. I was happy that Ms. A let us into her house and prepared the home altar, so I recited the sutra with gratitude. Until then I could not sit upright on my legs on the floor, as Japanese members do when they perform sutra recitation. On that day, however, I was able to sit straight, and didn’t feel any pain in my feet until the sutra recitation finished.

After the service, Ms. A served us tea and told us why she had stopped visiting the Dharma center. Listening to her speak, I learned how much she liked Rissho Kosei-kai. I was moved to know that she had continued practicing Rissho Kosei-kai’s basic practices, including offering water, tea, and rice at her home altar and reciting the sutra every day, even though she was not attending the Dharma center.

On our way back to the Dharma center, the members who had visited Ms. A together with me, said they had known why Ms. A had stopped coming to the center, but for the first time they were able to hear directly from Ms. A about what she had been thinking. I could not understand why Ms. A had let us in and allowed us to perform sutra recitation, and why she had opened her heart to us.

When I was back in the Dharma center, I asked the minister of the center for guidance about the possible reason. The minister first asked me, “How did you feel when you were performing the sutra recitation?” I answered, “I was happy to be able to perform it. So I recited the sutra from the heart.” Then the minister told me, “Recently you often asked me what a sincere heart (magokoro) means, didn’t you? The sincerity with which you were reciting the sutra at Ms. A’s home was the sincere heart.”

Through this experience, I learned how important it is to be honest and warmhearted whenever I visit members, taking their hand and leading them (tedori), rather than using various tactics to motivate them to come to the Dharma center. While I was in Sri Lanka, when there were youth group members who didn’t participate in events at Dharma center no matter how many times I called and invited them to come. I judged them as lackadaisical people, and stopped inviting them to activities. I reflected on my past attitudes and realized the importance of growing into being a person who is sincere at heart, and I realized that when there are members who have not attended events, I should go out to meet them and interact with them with sincere heart, instead of giving up on them.

This March, I will graduate from the GakurinSeminary and return to Sri Lanka. The teachings of Rissho Kosei-kai are spreading in Sri Lanka right now, with the seminars on family education at the center of the activity. Among the participants in the seminars on family education are a number of women who participate with their small children. I want to develop activities that would help children live happily by applying the teachings in their daily lives. For that to happen, I would like to consider seriously what kind of activities would appeal to young people. I hope that I will be functional in developing warm-hearted youth group leaders, who can help members experience spiritual liberation in their Dharma activities.

While Rev. Yamamoto was in Japan for the New Year holidays this year, I met with him, and he listened to all my present feelings and hopes. He encouraged me, saying, “Let’s work together as fellow practitioners of the Dharma.” I felt Rev. Yamamoto is placing high expectations on me to disseminate the Dharma in Sri Lanka.

I would like to conclude my speech by pledging to devote myself to Dharma dissemination after I return to Sri Lanka, always helping Rev. Yamamoto. Thank you very much for you kind attention. 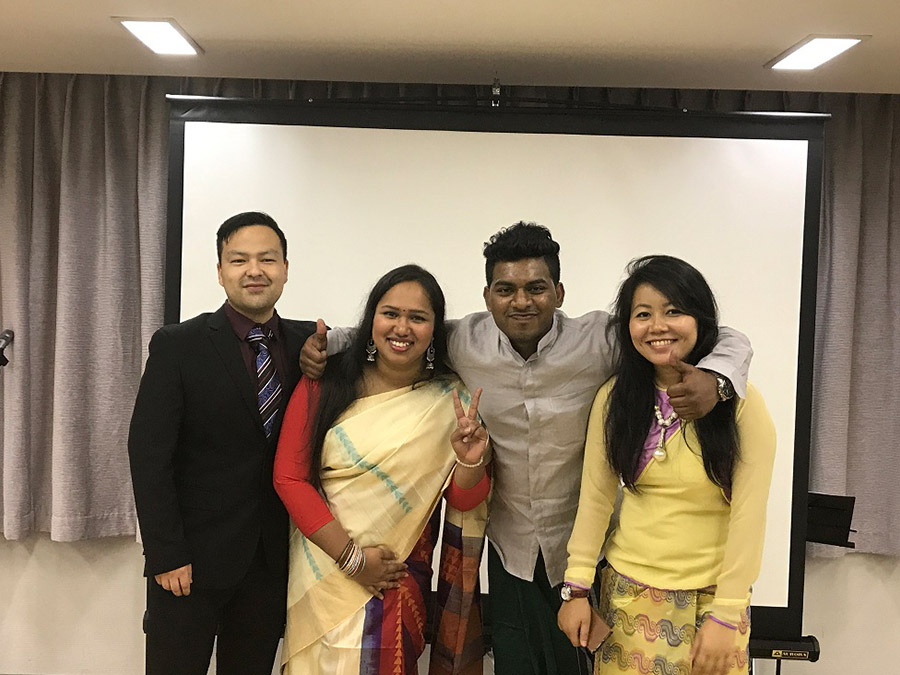 Mr. Sahan (second from right) with his classmates in the Inter-
national Course of the Gakurin Seminary.