Taking Everyone’s Joy as My Own

This spiritual journey was delivered during the ceremony celebrating the anniversary of Shakyamuni’s birth at the Chicago Chapter of the New York Dharma Center on April 19, 2015. 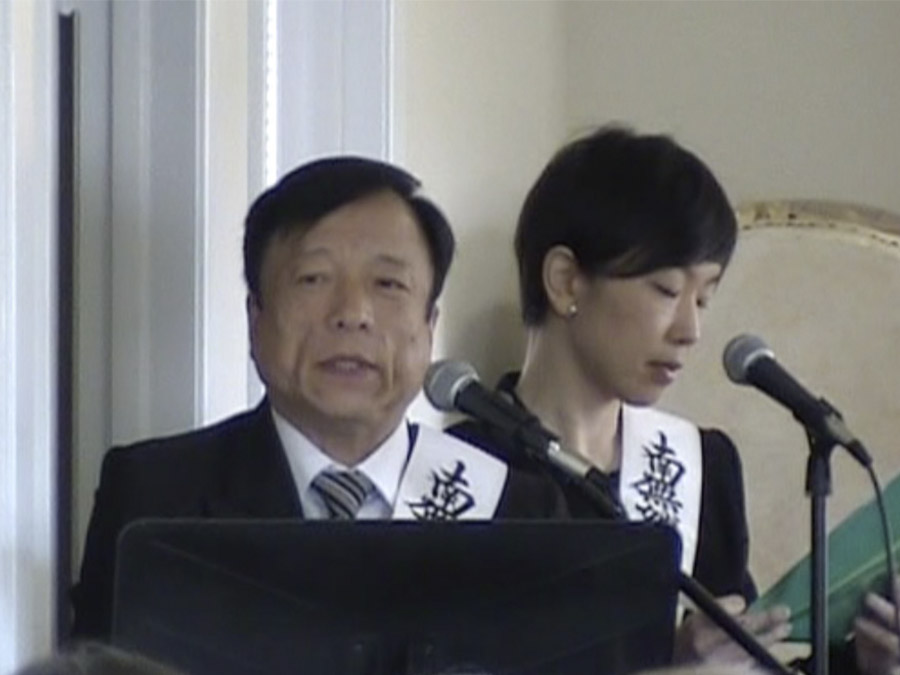 Mr. Imura delivers his religious testimony during the ceremony celeblating the anniversary of Shakyamuni’s birth at the Chicago Chapter of the New York Dharma Center.

I deeply appreciate this opportunity to speak of my spiritual experience at today’s ceremony commemorating the Anniversary of Shakyamuni’s birth.

I was born in 1948 in Tokyo. My mother became a member of Rissho Kosei-kai, and I grew up as a second generation member in this faith. I remember that my mother never imposed her faith on me, but I recall that the teaching was a natural, real part of daily life.

Around the time I graduated from university, I began to visit the Dharma center, and had been assigned the role of head of the youth group in my Chapter. I was so young that I did not understand the teachings well, but I took care of junior members of the youth group, and responded to requests for advice about whatever was worrying or concerning them. We did activities at night and on holidays. When members gathered, we started with sutra recitation followed by the hoza activity. Our discussions went quite well. In summer, we had good times going to the sea or the mountains for recreation. The teaching was the pillar of our activities, and we felt the real joy of moving toward one purpose, together with the members.

When I was twenty-seven years old, I was busy with my work, and I gradually moved away from the activities of the youth group. When I was thirty years old, I had a wish to leave Japan and to know the world more; my enthusiasm for this wish helped me travel, alone, to Canada. It was the first time I ever set foot on the American Continent. I had no friends there, and I just acted out of my youthful impulses. Thereafter, I moved from Canada to New York, relying on my friend. Looking back, I really experienced a series of twists and turns in my life in America. Amazingly, I had been blessed with encounters with good people, and I could manage to earn a living.

When I was young, I used to participate in the activities of the Dharma center in Tokyo, though I did not know much at all about the teaching. But what I had learned there must have somehow penetrated within me. I knew that there was the Dharma center in New York, and I started to visit there. I sought the teachings, and Rev. Kamoshita, the former minister, gave me a lot of compassion and understanding. I had been liberated both in mind and body. I am still filled with appreciation to her. Currently, thanks to her guidance, I am able to lead a life each day that allows me to fulfill my role.

It is a lifetime issue for a Buddhist to practice the teachings. I’m making an effort every day to walk the  path of becoming a buddha, according to the teachings. Now I have a role of taking care of some members in the New York Chapter. Today, I would like to report the virtue of my mind through the tedori, supporting members in the Dharma.

The other day, a member, temporarily referred to Ms. A (who I had always cared about) visited the Dharma center.  Although she came to the center, she almost never sat in the hoza circle until this time. The minister asked her to participate in the hoza if she was all right, and so she sat in the hoza. In the hoza, Ms. A started to talk about what was on her mind. She had a problem. Saying, “I did not intend to talk like this today, but can I continue to talk about myself?” she continued speaking in a burst of words. After briefly telling her story, while communicating with the minister, Ms. A thought deeply of each matter that arose, confirming that she herself might have the cause of the problem.

Ms. A’s problem was a conflict with her younger sister living in Japan. Ms. A and her sister had had a good relationship, but because of some trouble strife occurred between them. After listening to the details attentively, the minister asked Ms. A how she would like the situation to be. She immediately replied, “I would like to have a good relationship with her, as it used to be.” The minister answered, “It will be all right if you have such a viewpoint. Let’s start to study the Buddha’s teachings from now on.” Probably because she was finally able to talk about her problem, she looked better when she returned home that day. Until that time, Ms. A refused to receive Rissho Kosei-kai’s monthly magazine, Kosei, and weekly newspaper, the Kosei Shimbun, because they were sent from Japan to her. But I asked her to take the January and February issues of the magazine and the current issue of the newspaper with her when she returned home.

A week had passed, and I was so worried about Ms. A. I called her and asked how she was doing. She was doing fine and she cheerfully told me about how she had been. She said, “Mr. Imura, I have never read the Koseimagazine earnestly, but I read the January issue of the Kosei magazine in one sitting after returning home. What moved me most was the President’s Guidance. While reading it, what I learned in the hoza the other day kept going through my mind. The president’s words were so appropriate to my current situation that it surprised me; really, I was filled with wonder. His words which had deeply touched me were “kind words.” I learned what it means to use kind words when I talk to people, and I was absolutely enthralled by the president’s words,” said Ms. A with feeling.

I repeated her words, “Oh, really? Are you absolutely enthralled by the words in the President’s Guidance? That’s amazing!” Then she replied, “Oh, I could reflect on myself deeply that the cause of all my troubles was in me, not in the other.” I only repeated the words, “Great! Great!” Listening to her talk, I felt my mind also purified.

After hanging up the phone, I immediately read the President’s Guidance in the January issue of the Koseimagazine over again. “Kind words” is one of the seven types of nonmaterial donation, and it is the kind of generosity that doesn’t require spending any money. About the seven types of nonmaterial donation that are to be done in the family, the President says, “A cheerful face, a friendly look, and kind words are particularly important.”

In the previous hoza session, Ms. A said that she was suffering from a problem. But I understood that she was able to reflect on herself through the words of the President, and thought how she had attributed her suffering to her arrogant mind, without blaming the other. At the same time, her problem seems to be on the way to resolution. I just took the part of a listener, and nodding my head, I listened to her talk attentively. But I could feel her rejoicing, and I found myself filled with joy, as if it were my own.

Now I have realized that my soul is made purified and joyful through the encounter with Ms. A. Her joy becomes my own. I felt what a pure impression the joy of the soul had made on me, and the joy of living welled up in my heart. Frankly speaking, I had never experienced such practice of tedori, or supporting members in the Dharma. I have deeply realized the joy of practicing tedori. Today we observe the Ceremony of the Anniversary of Shakyamuni’s birth. We are able to encounter the Buddha Dharma by the grace of Shakyamuni’s birth, and we can encounter the Buddha Dharma by the grace of the Founder, who presented the teachings in an easy-to-understand manner to us living in this age. I would like to continue to spend my days taking everyone’s joy as my own. Everyone, thank you very much. 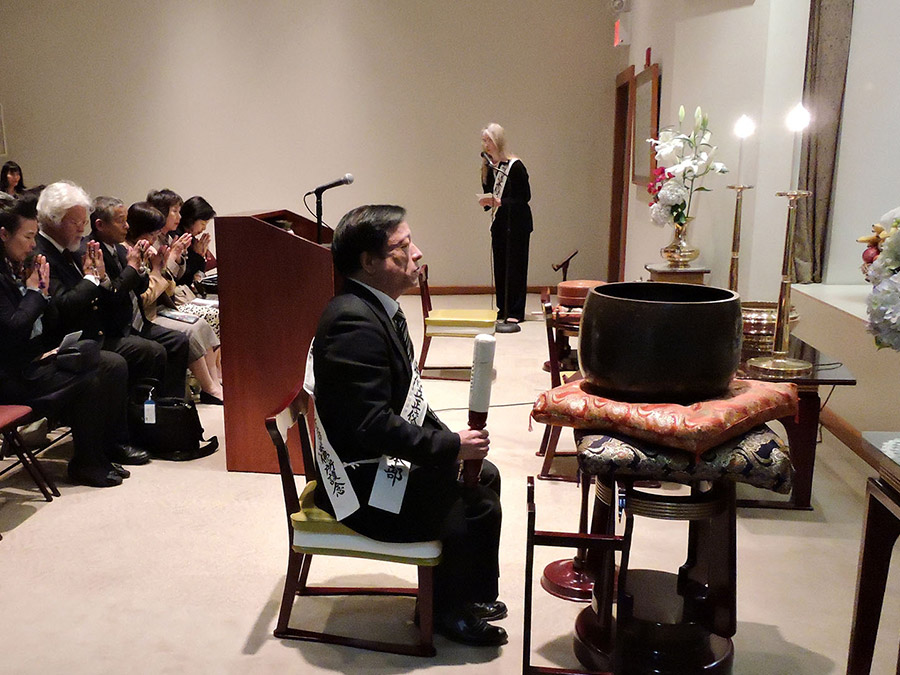 Mr. Imura serves the role of striking the gong at the New York Dharma Center.