Suffering Have Guided Me to the Bodhisattva Way

This testimony was delivered at the Great Sacred Hall in Tokyo during the World Sangha Assembly 2016 on May 29, 2016. 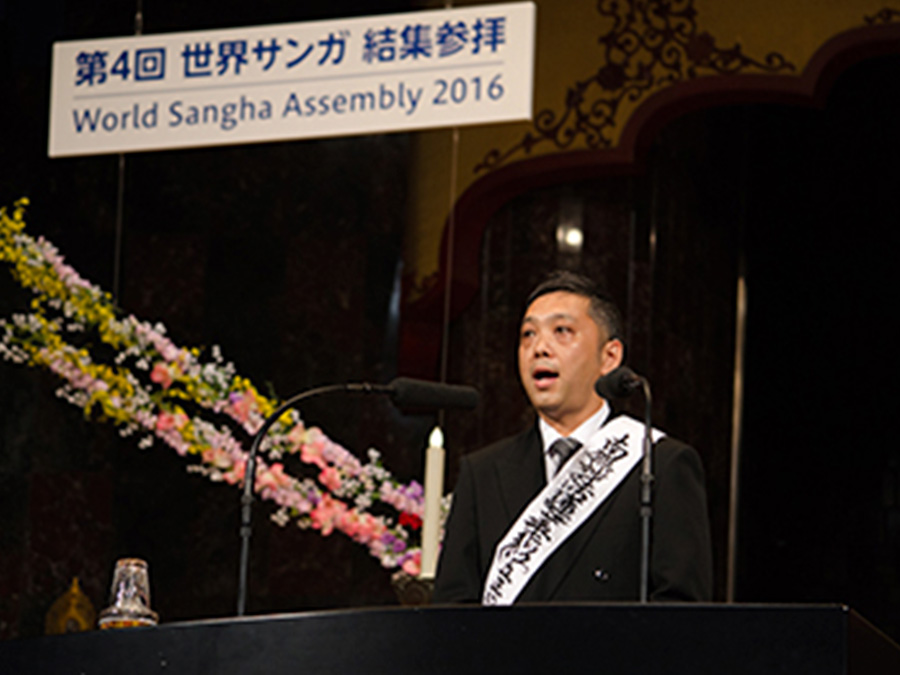 Mr. Koji Kato delivers his religious testimony at the Great Sacred Hall in Tokyo during the World Sangha Assembly 2016.

I was born in 1975, as the eldest son of the Kato Family. Since I went to the Catholic school from elementary school to university, I had the habit of praying before going to bed when I was a child, which always enabled me to have a peaceful morning. However, once I grew up, I thought that I no longer had to adhere to any particular religion in my life. When I was twenty-eight years old, I started a beauty salon. The salon aimed to improve people’s health and to provide healing by improving lymphatic flow.

One summer day, after I had run the business for five years, I wondered if there was a Rissho Kosei-kai branch near my workplace. I searched for information about it on the Internet and visited the Minato Dharma Center in Tokyo. Then, I asked a member, “Please let me study the teaching.” Though my visit was sudden, every member welcomed me in a kind and warm way. It was the beginning of my direct relationship with Rissho Kosei-kai.

Before I formed a connection with the Minato Dharma Center, there had been a problem related to my sister’s marriage. My sister was working together with me at my company. One day, one of my sister’s female customers asked my sister to marry her son. The customer gave her expensive gifts and became more aggressive with her offer. My sister gradually succumbed to the offer. The customer’s son then strongly urged my sister to quit working at my salon, and to come to live with his family. Honestly, my parents and I felt as if my sister was being restricted and our hearts filled with anxiety. We doubted that the marriage would really make her happy. At the same time, I also worried that my company would be endangered by my sister’s leaving. I objected to her marriage, and continued to criticize her partner’s forceful attitude. My sister rejected my criticism and left home. We failed to reach an agreement. We could not understand each other.

When I wondered if there would be any way to break through this situation, something suddenly came to mind. It was the Kyoden: Sutra Readings, which my mother had treasured. In fact, my grandfather on my mother’s side was a devoted member of Rissho Kosei-kai. I started reading “Ten Merits,” chapter 3 of the Sutra of Innumerable Meanings, every day; it appears first in the Kyoden. At first, I could barely recite it, but as I kept reciting, the following passage truly entered my heart. It begins with the verse, “The Buddha said: ‘My good children!’” Then it continues, “… Make an angry one give rise to the mind of forbearance,” and “Make an ignorant one give rise to the mind of wisdom.” It ends with the verse, “My good children! This is called the first wondrous merit-power of this sutra.” I felt this sutra speaking to me, and I continued to recite it every day. Gradually, I was able to calm down enough to reflect on myself. I considered the fact that since I started the business I had been an immature manager, and I couldn’t listen to my employees. Even in such a difficult situation, my sister was supporting me and my company with great devotion. I also thought of my sister’s voice at times, saying, “Do I have to continue supporting you in your work for my entire life. Am I not allowed to become happy for myself?” Then, I asked how I should change myself based on the teachings from this sutra. I made up my mind to listen to all of my sister’s feelings as well as what others have to say, and to apologize for always unilaterally and unquestioningly declaring my way to be right.

Right after I had changed my mind about things, I received a call from my sister. She said that she couldn’t fit in with the life of her partner and his family. She said she had come back to reality when she was told to break off the relationship with her parents, who were objecting to her marriage. She thought that she couldn’t live a life that required breaking her relationship with her loving parents. She broke off the engagement and came back to our home. At that time, she shared with us her sorrow, and little by little became herself again.

Things changed unexpectedly. I learned from this sutra the importance of changing myself first. As I was greatly attracted to this teaching, I became more eager to learn and acquire the teaching. Then, I searched on the Internet for the Minato Dharma Center and visited there. Supported by Mrs. Okada, the area head at that time, I came to learn the teaching. During a break from work, I participated in a memorial service held at the Dharma center and learned from the president’s Dharma talk, which taught the outlook of the Buddha: “Putting others first.” Mrs. Okada took me to the Dharma circle of the Men’s Group, and took me to members’ homes for guidance. I realized that my heart became purified each time I joined in the practice of the teaching, especially through the morning recitation at the Dharma center. I was so grateful for every single thing I had learned that I gradually became eager to share the teaching with my sister and employees. One day, I said to them, “As aestheticians we touch the very important bodies of our customers.What’s transmitted to the customers through our hands is our hearts. Unless our hearts are pure, we can’t be genuine therapists no matter how good our technique is. How about learning the way to cultivate our hearts and minds at the Dharma center with me?” My sister and two employees joined me in going there, with no objection. After the sutra recitation, I asked them, “How do you feel?” They said, “As you always say, I felt that my heart was becoming purified as I recited the sutra together with the members. From now on, we’d like to learn with you.” Though I had been worried as to whether I should take them to the Dharma center, their positive reaction instantly made me happy. Now, they have grown to be leaders of the Young Women’s Group.

I was motivated to devote myself more earnestly to the bodhisattva practice. The winter before last, alongside Mr. Kawamoto, the head of the Men’s Group, I visited a member who had ended up living homeless near the Dharma center. I witnessed Mr. Kawamoto, who had been steadily listening to the homeless member for over 30 minutes, kneeling down so that he was at eye level with the member, who was lying down on a bench in the cold night; I thought that bodhisattva practice is not something easily done. I also learned from Mr. Kawamoto, who revered others unconditionally. Since that day, I have tried to see people equally according to the teaching of the Buddha. A few days after that precious experience, I was able to make friends with a homeless man. He told me, “You don’t see me with prejudice. You listen to me while looking me in the eye.” What he said made me feel happy. I learned that we can find the practice of liberation close to us, and we can practice it if we feel sympathy for others.

The other day, I recounted these experiences in the Dharma circle. The minister of the Dharma center who had been listening to me told me passionately, “You would not be here today if not for the problem with your sister’s marriage. You were guided to the Buddha way through suffering, and it made your way of life change. This is nothing less than the Buddha’s compassion.” They were surprising words. In that moment, my way of accepting suffering changed dramatically. I was guided to the teaching by the suffering, so that I could change my way of life and put others first. My heart swelled with joy and deep gratitude to the Buddha. It is thanks to all of the sangha members who have supported me up to this day that I could know such joy. I would like to express my gratitude to them from the bottom of my heart.

On that day, I was able to openly and easily share with my sister what each of us had been thinking in past years. This reassured us and made us grateful for the fact we are brother and sister, that our parents had given us life, and that we had received the precious teaching. My sister has closed a difficult chapter of her life and started a better one. Now, she is married to a man from England and has given birth to a boy. She has a role in the Women’s Group of her Dharma center. I pledge myself to revere the buddha-nature in others, no matter what circumstances they are in, and to practice the bodhisattva way, cherishing this joy as a treasure. Eternal Buddha Shakyamuni, Founder Niwano, and the President Niwano, thank you very much.

Finally, the other day I joined the Dharma dissemination support in Cambodia, and interacted with the young people who are spreading the teaching there with precious vision. I deeply appreciate the marvelously valuable experiences that I had there.

It’s impossible to ask my grandfather, who passed away before I was born, about what kind of joy had motivated him to practice the teaching at Rissho Kosei-kai.

However, now I have encountered the precious teaching of the Buddha and the Founder to cultivate my inner self with gratitude. When I think of the fact that my grandfather’s deep faith in Buddhism is working in the background of my life, and that he guided me to the way through my mother, I feel grateful. Thank you very much, grandfather. I will continue to encounter many people with the spirit of the Bodhisattva Never Despise and strive to disseminate the precious teaching. 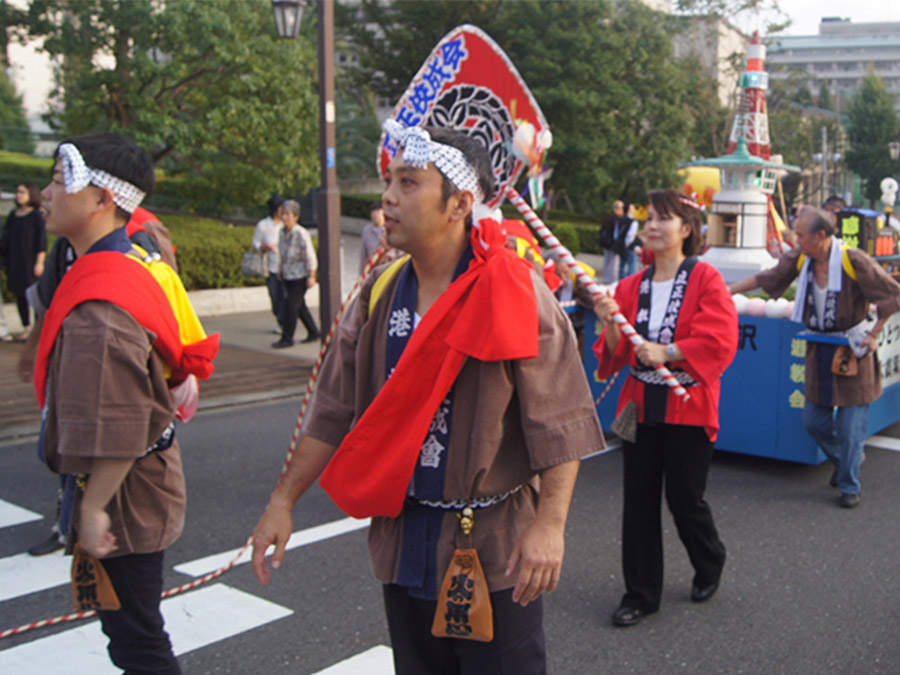