Sorrow Is a Gift from the Buddha

This speech of spiritual experience was delivered during the ceremony when Rev. Kosho Niwano, president-designate of Rissho Kosei-kai, visited the Sri Lanka Dharma Center on October 23, 2015. Mr. Sahan is going to enroll in the overseas course of Gakurin seminary in April, 2016. 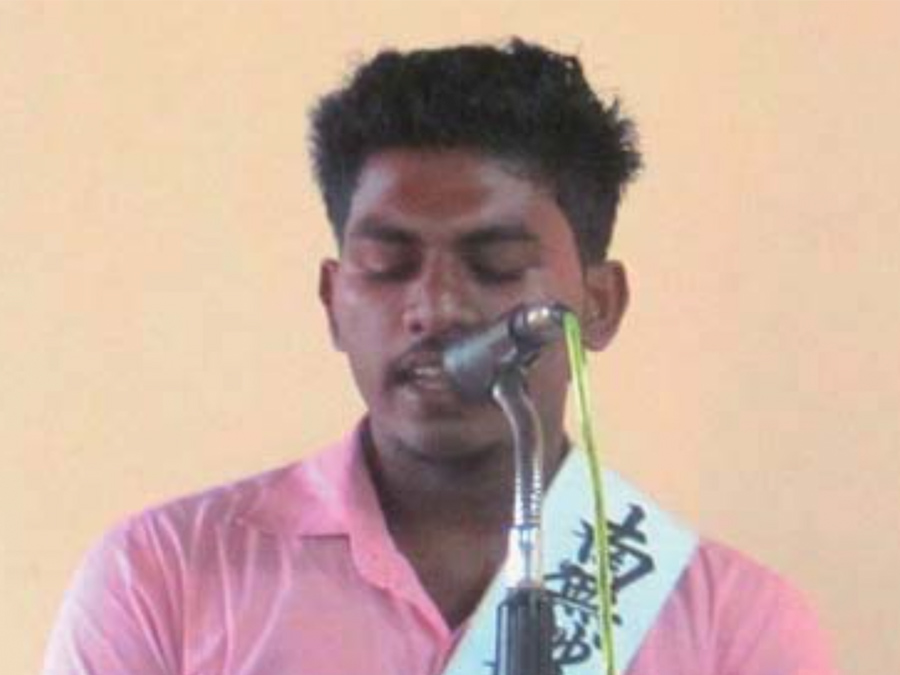 I am Sahan Chamara. I was born on May 23, 1994, in Welmilla in Sri Lanka. The name of my father is Chandana Pushpakumara, and my mother is Dipika Damayanthi. I am the oldest of three brothers.

We have a small house with a living room, kitchen, and another room. My father works as a car repairman. We have never had any money to spare, but we have been very happy to live with five family members.

I was interested in dance and music from my childhood, and gradually started to dance and play music in front of people. I was invited to neighbors’ houses when they held wedding parties or invited a Buddhist monk to listen to him preach. I began to earn money by dancing and playing music. I stopped receiving pocket money from my parents when I was fourteen years old, and I started to do things for myself.

In addition to dancing, I had studied as an army cadet and also had been in training as a Boy Scout in school. During such busy days, I passed the exam of the Ordinary Level, the graduation exam of junior high school, as well as the entrance exam of high school. Thereafter I took the exam of the Advanced Level, the standardized preliminary exam for university applicants, and I added the subject of dance to the exam.

One day, Amila, a relative of mine, said to me, “Why don’t you come with me to a Buddhist organization at Papiliyana?” I visited the Sri Lanka Dharma Center of Rissho Kosei-kai for the first time. I met Ms. Ruklanthi Nisansala there.

At the time, some members were preparing for the Vesak festival of 2011 at the Dharma center. Ruklanthi asked me to help her decorate the wall, and I did it until late in the evening.

Ruklanthi said to me, “This is your first day, but I asked too much of today. Have you come to dislike Rissho Kosei-kai?” She was concerned about me and said, “Wouldn’t you like to come here again?” I was tired actually, but somehow I wanted to come back.

I started to regularly visit the Dharma center after that. Amila invited me to a youth seminar of three days and two nights at Kandy, but I could not get permission to participate from my parents. I told Amila about it, and then he came all the way to my house to explain my parents about the seminar.

My father said to Amila, “Sahan is not a kind of boy who can stick it out until he achieves something. He may come back home on the way to Kandy. It could cause you trouble.” But he finally granted his permission to participate in the seminar.

I went to Kandy by car with Rev. Yoshihisa Yamamoto, who is the minister of the Dharma center, his wife, and Amila. The other participants went there in advance. I met Rev. Yamamoto on that day for the first time, and I was able to talk quite a bit in the car with him.

I became friendly with the other members at the seminar. I took lectures during the daytime, and sang and danced at night with them. I experienced sutra recitation for the first time. I could not understand the meaning of the sutra and the contents of the lectures at all, but I could participate in the seminar by acting with the other youth members.

The participation in this seminar induced me to go to the Dharma center more often. I started learning the Dharma with youth members and participating in the program of Poya Day (the Buddhist holiday of Uposatha in Sri Lanka). In addition, I began to attend the Japanese-language class of Rissho Kosei-kai. I gradually learned the rites and rituals of Rissho Kosei-kai, and came to apply the Buddha’s teachings to my life.

When I talked to my mother about it, she said “Our house is too small to invite so many people over. Why don’t you invite them to our aunt’s house instead?” However, I really wanted to have them hold sutra recitation for enshrinement at my house regardless. Then my father said, “Let us break open the kitchen area, and make a new room there. And we’ll make a washroom and a new kitchen in our house.”

Even though we had only two weeks until the enshrinement day, all of my family cooperated together so we could complete the reconstruction of our house. Thanks to the Buddha’s arrangement, Rev. Kazumasa Iizuka, minister of the Chichibu Dharma Center, along with thirteen youth members of the Saitama division, came to my house and completed enshrining the Gohonzon.

I received the role of the head of the young men’s group in 2014. Then, I applied for the Overseas Students Course of Gakurin seminary in that year, but I failed in the last exam of the interview on the Internet. I was truly sad when I found that out.

Rev. Yamamoto always teaches us that we should feel grateful for everything we experience. “It is important for me to accept the fact that I did not pass the exam of Gakurin seminary as a gift from the Buddha in order for me to improve my life.” In that way, I accepted the fact, and visited the Dharma center more than before in order to learn the teachings. I made efforts to get closer to the Buddha even a little. I was honored to have a chance to participate in a youth leaders’ seminar in Bangkok, Thailand, in last May. Through what I learned at the seminar, I realized that I had not thought deeply and firmly about for what purpose I wished to enter Gakurin seminary, and what I should study there when I applied for the entrance exam last year.

Rev. Yamamoto always teaches us that we should shine the life of the Buddha within ourselves. Because I have been conscious of his guidance in leaning the Dharma, I feel a greater change occurring in my heart, more so now than last year. This year, I applied for the entrance in Gakurin seminary again. I want to share with you my experience of guiding others to the faith, which I wrote in the document when I applied for it.

I have a twenty-year-old friend named Nareen. He lives with his parents and two younger sisters. He started seeing a girl, but she didn’t seem to be a good person. I told Nareen how I felt about the girl, but he had fallen in love with her and wouldn’t listen to anyone around him.

One day, Nareen went out for a trip of three days and two nights with her. His father happened to know about this situation during the trip. As soon as Nareen came back home from the trip, he had a big argument with his father. I couldn’t sit still after hearing it, and visited him at his house. He told me everything. He said, “I went on a trip with her, but we separated when we came back.” He was very depressed, because he was yelled at by his parents and had separated from her. Due to the shock, he shut himself in his house and refused to go to work.

Nareen bought a motor bike on a loan, but he had spent all his salary on the girl, and had defaulted of the payment on the bike for four months. As a result, his motor bike was seized by the loan company. Nareen was depressed even more by that. I tried to drop in at his house on my way back home from work every day and listen to the voice of his heart as Rev. Yamamoto had taught me. After a month passed, he was starting to look better, little by little. I called the office of Nareen and asked if Nareen could return to work. Thanks to the company’s consideration, he could get back to work. Then his family opened their hearts to one another and regained a peaceful family, as it had been.

I was able to help my friend find relief from suffering thanks to the teachings of Rissho Kosei-kai. Thanks to the Buddha’s arrangement, I could receive the opportunity to study at Gakurin seminary beginning in April of 2016. I learned the Buddha’s teachings at Rissho Kosei-kai, and my life changed. I believe that it is because I came to apply the teachings to my way of life. We encounter various kinds of sorrows, but I think we should accept them as the arrangement of the Buddha, improving our lives through learning something from them.

I would like to vow to learn the Dharma more concretely and deeply at Gakurin seminary, applying it to my life and sharing the teachings with people around me to liberate them from suffering.

Rissho Kosei-kai is a place to make our own lives better. I believe that we are under the compassion of the Sangha and the protection of the Buddha. I would like to conclude my speech by expressing my gratitude to Amila who guided me to Rissho Kosei-kai. 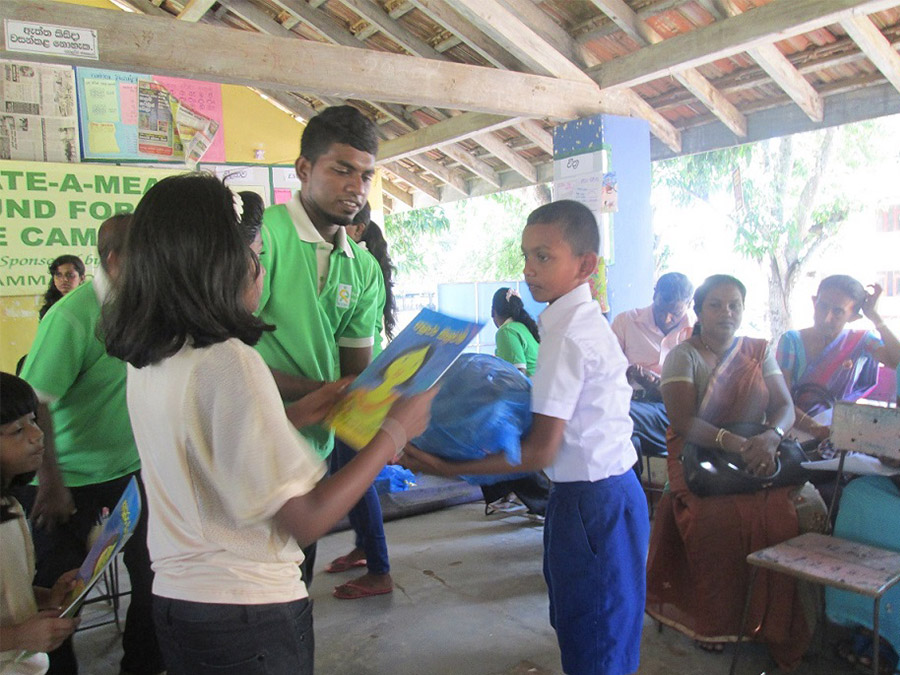 Mr. Sahan Chamara Dingathanthirige (middle) offers school supplies to 150 students of Okkanpitiya Wijayabahu School in the city of Monaragala as the support of Rissho Kosei-kai’s Donate-a-Meal Fund for Peace.