Realizing the Importance of Positively Connecting with People

This Dharma Journey talk by Mr. Keisuke Umetsu was presented in the Great Sacred Hall on August 4, 2018, during the ceremony for the Founder’s Memorial Day. 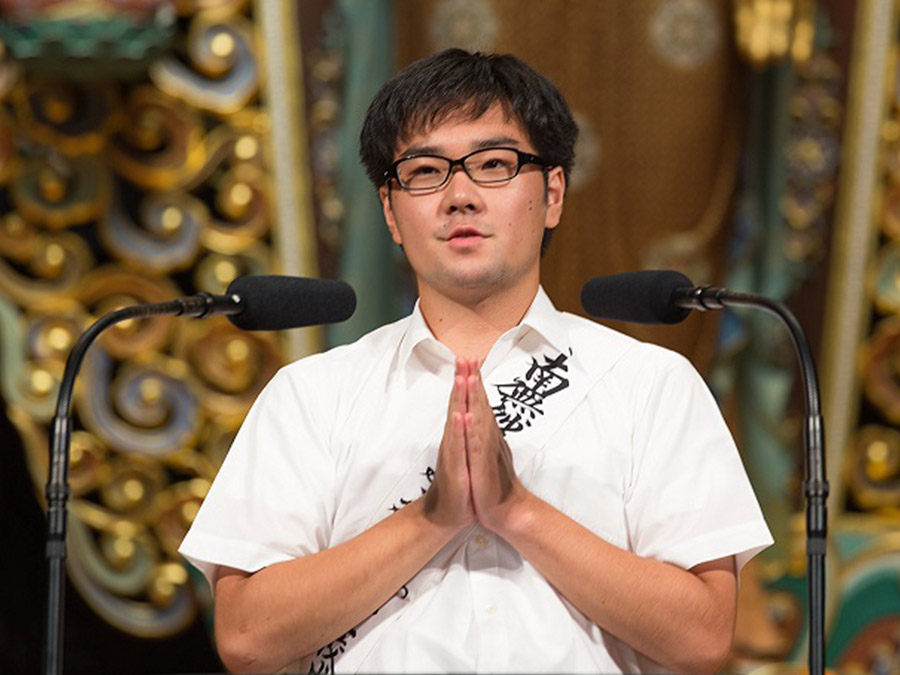 Good morning, everyone. I was born in 2002 as the first son of the Umetsu family in Kokubunji City, Tokyo. My family’s connection with Rissho Kosei-kai originates with my great grandmother, who was guided to the faith by her niece and became a member in 1948. I was told that she had toured all over the town, disseminating the teachings that had liberated her from suffering. My grandmother, who had married into the Umetsu family, first opposed the faith. But she was moved to learn Founder Niwano’s aspiration for bringing peace to the world, and inherited the faith from her mother-in-law. My parents met in the youth group activities of Rissho Kosei-kai and got married. They are still taking on roles at the Dharma center and continue their Dharma practices. Although our family was not rich, I was raised in a happy family. As a fourth-generation member, I naturally began to go to the Dharma center.

During the winter season two years ago, my mother began to lose her voice. She went to the hospital for an examination, and was told that there was a tumor on her trachea, which caused the speech difficulty. She had surgery that would help her breathe, and since then she has always had to wear a tracheostomy tube on her throat. My mother continued to do housework as before, but the sound of her breath leaking from the tracheostomy tube was audible all the time. The scarf that she wore on her neck to hide the tracheostomy tube looked bizarre to me. Three years ago, an angioma, a benign tumor made up of small blood vessels, was discovered on her right inner ear and she had a surgery to remove an eardrum. I was perplexed with all these unfortunate events happening to her, one after another.

My mother took care of all the housework and supported the family. I was grateful for what she had done for us. But, before she got ill, every time I would come home and share with her about my day, she would say, “It all happened for a reason,” and so on, which I found annoying. She would also ask me, “Have you done with your homework?” when I was about to do my homework. I wondered many times why she was so persistent.

Because of her illness, however, my mother lost her voice. She could not even say “hello” if she picked up the phone or when she had guests, so I had to do it all for her. Whenever my mother wanted to say something, she had to write it down. It was frustrating that I could not hear her response when I talked to her. Since my mother did not talk, the house was silent, and a day without my mother speaking felt very long. I worried about my future, wondering what would happen if this kind of life would continue indefinitely.

When this situation continued for two months, I felt lonely for not being able to have a conversation with my mother, and realized that all what she had told me was an expression of her consideration for me. I realized that my mother had taught me (at the expense of her health) that being able to speak, or leading a healthy and normal life, does not come easily and we should not take it for granted. Up to that point, I had helped my mother reluctantly; but since I realized this, I was able to happily help my mother. Later on, my mother went through further treatment, and her voice, which had been diagnosed as permanently lost, has miraculously begun to return. Now, whenever she talks about her illness, she always says that she was able to go through the painful treatments thanks to the support of people who prayed for her. All she feels is gratitude, she says. Having gone through these painful experiences, what she feels now is gratitude for those who cared for her. Looking at my mother, who is always considerate of others, I began to think that I would like to become like her.

While my mother was convalescing from her illness, I received a role as the head of the high school students’ group of our Dharma center. Last summer, I participated in the Peace Seminar in Hiroshima, which was held by the Tama Division. Along with my fellow participants in the seminar, I learned the misery that the war and the atomic bombing had brought to people, and the sense of the preciousness of life.

One day, I heard Y, a youth member who participated with me in the Peace Seminar, had stopped going to school from the beginning of the new semester. When I heard this, I could not sit still as the head of the high school students’ group, so I went to visit him right away. I was thinking about what to say while riding the bicycle to his house. However, on that day, no one answered the intercom at his house. I was sorry for not being able to see him, so I wrote a letter to him and put it into the mailbox of his house before I left. Two weeks later, I met Y’s mother at the Dharma center. She told me that Y had begun going to school since the Monday of the week following my visit to his house. It was a happy surprise to me. I felt that I might have become someone who can help others, like those who had prayed for my mother. I wanted to tell Y how happy I was to learn that he had read my letter, and he was doing his best. Although I visited him a few times since then, I have not yet been able to see him. Now I desire all the more that he does well and that I would be able to see him again soon. Through this experience, I have learned that meeting and talking to someone directly is not the only thing that matters, but continuing to be considerate of them (even if you cannot meet them in person) helps you become kinder and more warmhearted. I continue practicing tedori, looking forward to meeting Y again and getting more firmly connected with him.

My dream is to build a warm and loving family just like my parents did, in which the father always has a smile, and family members exchange words of thanks for everything, no matter how trivial it is. This was because when I talked with my friends, I often realized that things that seemed to be daily and ordinary occurrences in my family, were not necessarily so typical in their families.

There was something I discovered during this year’s Youth Day. At Rissho Kosei-kai of Koganei, under the slogan, “Let’s Take a Step! Get Connected and Create a Warmhearted Sangha That Unites All,” all members of our Dharma center were united in promoting fundraising activity in front of railway stations. I had participated in the fundraising activities many times till then, but on that day, I noticed high school students in school uniforms were among those who donated money. Through the activities of the day, I witnessed the power of the sangha, which becomes manifest when the members are united as one, even if the power of each person is small. I also found that the power would bring out the buddha-nature of many people. And, more than anything, I realized that if you would act positively to get connected with others, things will work out and develop of themselves.

I hope to become someone who can help others create happy families, and in order to do that, I would like to reach out to people who are in trouble and listen to them closely. 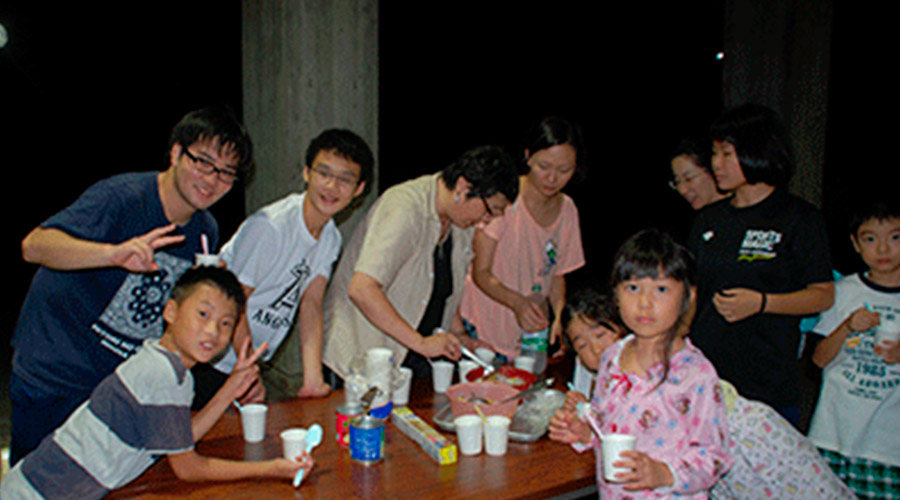 Mr. Umetsu (far left, in the back row) participates in a Youth Camp at the Ome Retreat Center, in western Tokyo.