Gratitude to All for Leading Me to This Path

I was born and raised in the Oklahoma City, Oklahoma area. I grew up during a time of great social unrest in the United States. Violence, death and destruction were being broadcast for the first time. Civil Rights protests, the War in Vietnam and the protests of the war were front and center via television.

I attended a Methodist church and eventually became a member. It was the thing to do and a way to socialize. As I grew older, I began questioning things I was being taught and did not find the answers satisfactory. This questioning led me to a great interest in studying sociology, psychology, and humanities, in a quest for answers. I had great teachers that taught me about the social and civil events that were happening around not just our country, but the world.

I joined the U.S. Navy a few months after graduating high school in September of 1975.  This began my first real experience with different cultures. It was also when I began self-medicating with alcohol. I joined within months of the fall of Saigon, so rules were more relaxed than they are today. It was encouraged to “work hard, party hard.” After a while it was just about an everyday occurrence.

After being stationed in Washington state I made two cruises on the USS Enterprise to the Pacific and Indian Oceans with port calls in many Asian countries, a couple of Australian cities, and a stop in Kenya. Being exposed to so many cultures led me to much deeper understanding of human nature.  The Asian ports interested me greatly and I felt drawn to the people and cultures. I had been meditating on my own for several years by then and had developed my own style. I really didn’t have any kind of “practice,” just used meditation when I was stressed.

My wife and I eventually transferred to Puerto Rico for three years. I loved the island way of life.  It was hard work but very rewarding. My job was going well and I was moving up in rank. I enjoyed going to the many cities and towns around the island. My daughter was born there and brought much happiness into my life.

We then transferred to Maine. It was a wonderful place and totally different from anywhere I had been. We celebrated the birth of our son, making our family complete. I also visited Iceland and Bermuda.

I chose to leave the Navy in 1985 after 10 years of service. I had a hard time finding work when I got back to Oklahoma. While my meditation still worked, it was very inconsistent. My alcoholism was very serious but helped to numb me from my feelings of failure and inadequacy. I found a job working as an assistant manager for a regional restaurant chain. I eventually was promoted to general manager. I worked in that field for eight years.

In 1993, I was offered a job working for my father in a freight business. It was very rewarding and when my father retired in 1998, I was made the Operations Manager. In 2003, my alcoholism reached its zenith and my wife gave me an ultimatum – either I stopped drinking or my marriage was over.

Looking back on it, I had been a functioning alcoholic for approximately 28 years of my life. Deep down I knew I needed help. I had quit in the past for a few months at a time but always seemed to slip back to what I thought was the answer. I would withdraw from my family and often drank alone, isolated. I blamed everyone for my alcoholism; my family, my parents, grandparents, even my jobs.

I helped coach my son’s little league baseball teams, attended school functions for both of my kids and supported them in every way except the way I should have. I was very hard on my children and often very critical. We had many arguments that would not have happened if I had not been an alcoholic. I was not totally “present.” I quit drinking on May 11, 2003, Mother’s Day, the day of my wife’s ultimatum.

I needed something to fill the void. As in chapter twenty seven of the Lotus Sutra, a family member led me to the dharma. My wife gave me a book, The Buddhist Religion: A Historical Introduction. I had no idea at that moment the impact it would have on my life. I didn’t understand a lot of what I read but something spoke to me on a very deep level. I began searching for more books over the next few months.

In 2003, I was told about a Basic Buddhism class at the Dharma Center of Oklahoma. I went and was introduced to a lady who would become a much valued member of my circle of teachers, Reverend Yasuko Hildebrand. I also met Reverend Kris Ladusau and Kim Miller Moffeit. I began going to services on Sundays and met Ann Rinehard who became and still is one of my closest friends and mentors. I’ve been so fortunate to have not only these people, but many more that have influenced my practice.

I became a bit lax about Sunday services and primarily attended special events for a few years.  During this time I was helping to raise my grandson. But even though my attendance was sporadic, I was always welcomed with open arms and warm hearts.

Gradually, my attendance increased once again, and in October of 2012, I was asked if I wanted to participate in a Prison Outreach Pilot Program the Dharma Center was starting up. I said “Yes.” I’ve been going to the Oklahoma State Reformatory at Granite, Oklahoma every two weeks for nearly two and a half years. We have developed a strong sangha of ten to twelve core members with others coming in out of curiosity from time to time.

We practice meditation and a non-sectarian curriculum. Everything I do is grounded in Rissho Kosei-Kai teachings, including the Basic Buddhism Class. I have learned so much from the members of the Prison Sangha, they have been great teachers for me. The program is flexible, including time to address the kind of problems they face on a daily basis and how Buddhism can help them. We are hoping to expand in the near future.

Since my involvement in the Prison Outreach, my practice has become very regular and my involvement with the Dharma Center has expanded. I received Gohonzon in October of 2013, and I currently serve the sangha as a member of the Board of Directors.

Now that I’ve been sober for a few years, I see things differently. I look at each day as full of possibilities instead of problems. I know there are many things in the world I have no control over but, there are things I can control. I believe change starts with me.  I’ve seen evidence of this in my relationships with my wife and children. I realize how important they are in my life.

My alcoholism seems a distant memory. I know that I am the sum of all my life experiences, both good and bad, and without them I would not be where I am. My practice has given me the opportunity to be more mindful in everything I do. The impact I may have on someone or something no matter how insignificant it seems at the timecould have a profound effect. I may never know the outcome and that is okay. I try to approach things without expectations. I want to continue my studying the dharma and teaching others. I want to become more involved in my community and I want to continue and expand outreach efforts.

There are so many that I owe much gratitude for all the Buddhist wisdom I have learned along the way, Founder Niwano and Co-Founder Naganuma for creating the path, the Reverends and leaders of the Dharma Center of Oklahoma, and all Reverends instrumental in my early days with Rissho Kosei-kai. All the teachers I had throughout my life from school teachers to leaders in the Navy, I thank my parents who brought me into this world and all my family and friends who have helped light my path.

But, especially, my wife and kids, you saw the light in me when I could only see darkness; you stuck by me when we were going through some of our saddest days. Without your support I would not be where I am today. You gave me the strength I needed to confront my alcoholism and led me to this path and I am eternally grateful. I humbly bow to you all. 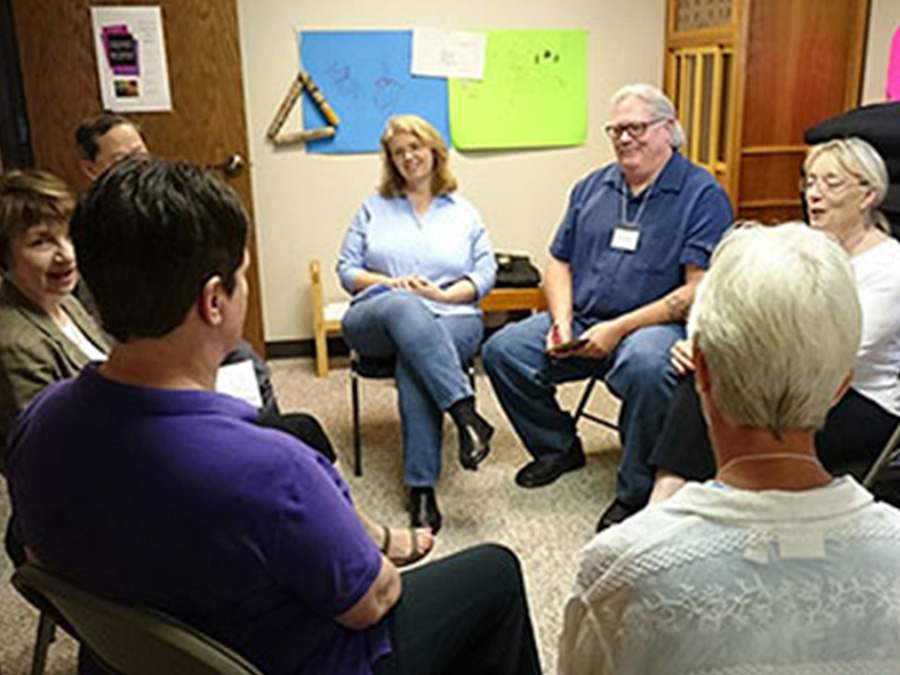 Mr. Shumate participated in the All U.S. Leaders Training Seminar.