My Twenty Years in Pursuit of the Buddha’s Teaching

On July 14th, 2015, the West Tokyo and the Tama divisions, and Rissho Kosei-kai of Rome held a members exchange program in Rome. This spiritual experience was delivered at the ceremony during the program. 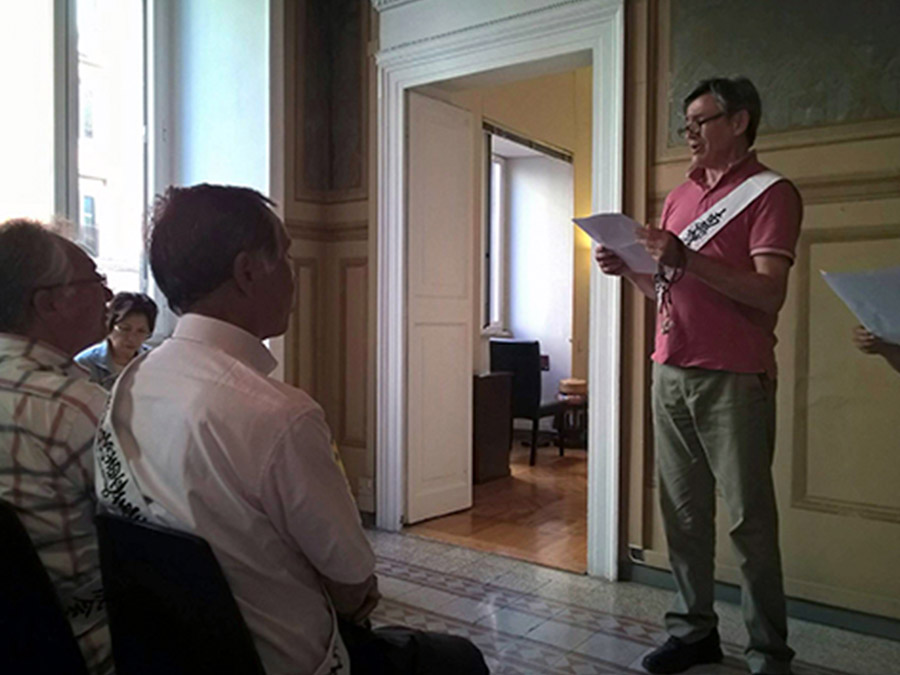 Mr. Salvatore shares his spiritual experience at the ceremony during the members exchange program held in Rome by the West Tokyo and the Tama divisions, and by Rissho Kosei-kai of Rome.

HELLO everyone. I’m Salvatore Montemale, and I live in Rome. I became a member of Rissho Kosei-kai in February this year, so I don’t have many years of experience as a member. However, the path of my personal growth as a human being, based on Oriental thought, started about twenty years ago. It was 1996 when I divorced my wife and began to live separately with my children. It was the most severe period I had faced in my life, and my condi- tion suffered. I started having various symptoms, feeling a deep sense of unease and suffering from indigestion. Seeking medical treatment, I visited my doctor, who was very familiar with my situation, and he suggested that I should do yoga, rather than under-going western medical treatment. I took a yoga class, called Hatha Yoga, which is one of the traditional systems of yoga, and my health condition changed for the better in a short span of time. I continued to do yoga and train my body for a few years. Through doing yoga, I realized that I am the sole designer of my life and that I could lead my body and mind to any condition, good or bad. My yoga teacher often told me that yoga meditation could lead one’s mind to peace, and that it was necessary to walk a moral way and change one’s perspective on life. Through accumulated experience of various kinds of spiritual pursuit, I came to know some practices related to Buddhism.

There are wonderful monks in Tibetan Buddhism and Theravada Buddhism, but I thought they are generally far from the kind of life we lead. At such times, I had an opportunity to know about Soka Gakkai through my friend. My friend told me that there is a group whose goal is to spend a better life through chanting O-daimoku.

I visited that group, and soon I was attracted to the Lotus Sutra, which includes various parables and teachings. Through listening to the discussion about the teachings and hearing about many members’ personal experiences, I became interested in improving my mental aspect. However, I decided to leave Soka Gakkai because I couldn’t accept its purpose, its inter- pretation of the Lotus Sutra, and the way of practice. Still, the Lotus Sutra was a guiding principle for my life, so I studied it by reading books, such as Opening the Heart of the Cosmos: Insights on the Lotus Sutra by Thich Nhat Hanh. Later, I joined a temple of the Nichiren sect that is in the Piemont region, in the northwestern part of Italy.

While walking this way, I realized that my way of life and my mental attitude were gradually changing. I came to concentrate on the here and now, not worry- ing about the past and the future. As a result, the relationships with my sons and my interpersonal business relationships gradually improved. More- over, I realized that there are many important people around me, any egocentricity with me decreased, and I understood my weakness.

Unfortunately, however, I gradually stepped away from the Nichiren sect because I felt it put too much importance on the observances, rituals, and Nichiren’s writings, and they don’t study the Lotus Sutra itself. I thought that their practice was against the will of Nichiren, who had protected the faith in the Lotus Sutra at the risk of his own life.

In January of this year, I happened to know that my friend, Mr. Francesco Cannizzaro, had encoun- tered a Japanese Buddhist organization in Rome. I hold him in very high esteem, so I became interested in the organization, Rissho Kosei-kai. I decided to visit there, and I found everything that was important to me could be found in Rissho Kosei-kai.

In Rissho Kosei-kai, I was able to observe the origins of Buddhism without any unnecessary additions. I learned the Buddha’s direct messages with no extras. Rissho Kosei-kai’s Gohonzon, the focus of devotion, is expressed as a standing statue, so that the Buddha can extend his helping hand to us and liberate us anytime. The Dharma is the Lotus Sutra, and various parables and teachings within it lead us to practice them in daily life. The Sangha is a community that enables each of us to grow up and have mutual awakening through a hoza session. In Buddhism, many sects and denominations were born because of various social changes taking place through its long history, but I’m sure that the Buddha Dharma is the great treasure for all human beings.

Today, the Buddha Dharma that gives us the most appropriate teaching for our practice is available to any one of us. While writing this spiritual experi- ence, I was thinking what part of my mind has changed and how my life changed.

Twenty years have passed since I first encoun- tered the discipline of yoga and my way of living truly changed. I now live on a pension and my human relationships have changed. I no longer get involved in the business world where people vie with each other, and I can spend my daily life in pursuit of a more harmonious state of mind.

I became calmer and cast off my attachments. In addition, looking back on the past, I have realized that I have many people to which I should express my thanks, and those I should apologize to as well.

Unfortunately, I’m no longer able to convey my thanks or apology to all of them. However, thanks to the teachings, I am able to attain peace of mind, so I will express my thanks to people that I will meet from now on and I can discipline myself so that I may not need to apologize.

I have a lot of things to do. I would like to create a harmonious life with my new spouse, to do my best to help my sons’ families, and to wait for my grandchildren to be born, all while feeling a sense of gratitude. Above all, the primary thing I should do is to dedicate myself to the social activities through participating in a local community.

We are aware that we may be ill, and experience sadness and suffering someday. I believe that the Lotus Sutra will guide me to the state of tranquility even during such times.

In conclusion, I would like to express appreciation to the Italian and Japanese members of Rissho Kosei-kai of Rome, as well as members who came from Japan today, for having a relationship with such a wonderful Sangha like this and giving me the opportunity to share my spiritual experience. 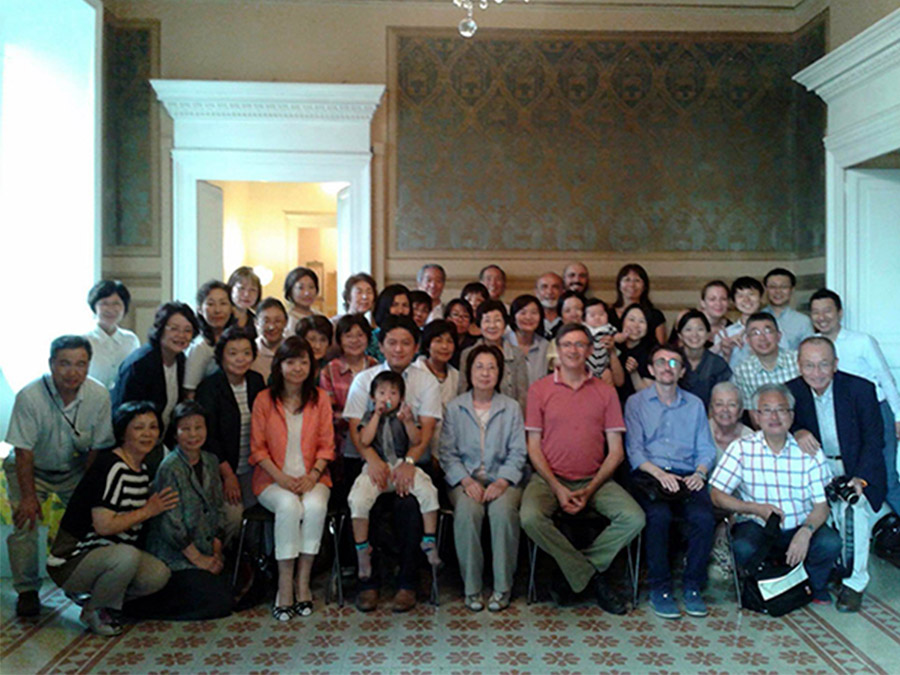 Mr. Salvatore, third from right, front row, and the members of the West Tokyo and the Tama divisions and Rissho Kosei-kai of Rome.