This testimony was delivered during the ceremony of the first day of the month at the Great Sacred Hall on March 1, 2015. 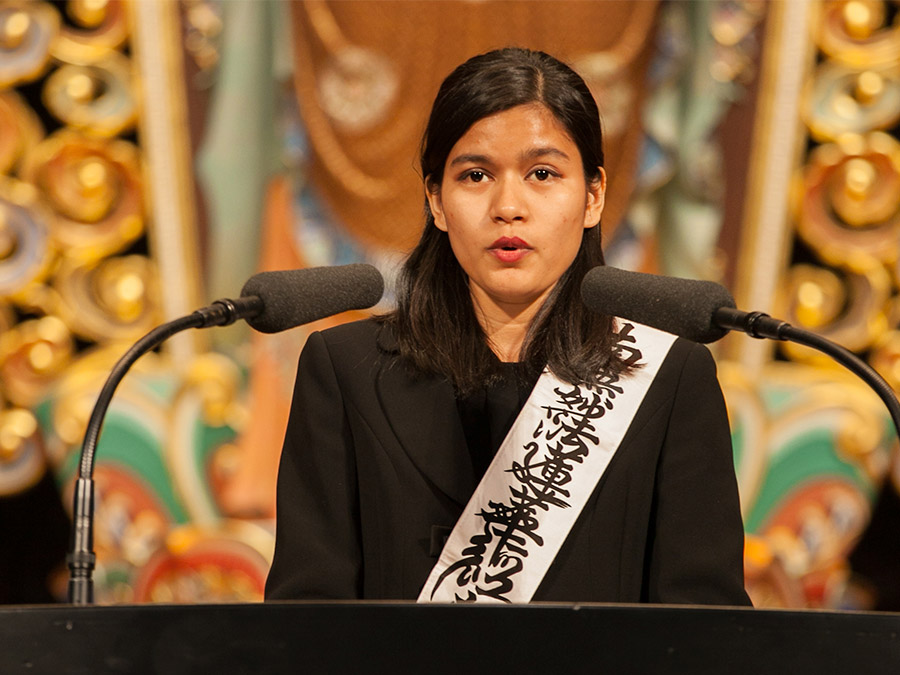 Ms. Moitri Barua testifies to her faith at the Great Sacred Hall.

Thanks to Rev. Mitsuyuki Aritomi, the minister of theBangladesh Dharma Center who dispatched me to Japan, my family and relatives, members of my Dharma center, my teachers and friends in Gakurin Seminary, and everyone who has always believed me, I can stand here today.

I came from the Damdama area of Chittagong in the Bangladesh Dharma Center. My grandmother and aunt joined Rissho Kosei-kai in 2003, and then my parents and I also became members. My aunt received Gohonzon, the focus of devotion, in Delhi, India, and thereafter guided many people to the faith. She began to use my parents’ home, inviting those members to come there so she couldshare the Dharma with them. My parents receivedGohonzon on October 20, 2007, and our house was officially approved as the Damdama branch. My aunt has served as the Damdama area leader. When I was a junior high school student, I began to visit the Dharma center weekly. I was assigned the role of girls’ leader and had an opportunity to participate in the leaders’ seminar held by the South Asia Division, along with overseas members. It was all thanks to my aunt, because she has loved me so much and was always concerned about me. She has no children due to her late marriage. For this reason, she takes care of me as if I were her own child. Because she hadalways encouraged me, I was able to participate in the Dharma classes. When I took the classes, I felt a sense of peace. I listened to the Dharma talks by our minister and the staffs who had come from Japan, and had an aspiration to learn the Lotus Sutra more deeply. However, it is very difficult to learn the Lotus Sutra in Bangladesh. I was a university student at that time, but I wanted to quit schooland enter Gakurin Seminary in Japan. I loved to not only study the Lotus Sutra, but also share with many people the teachings taught by the Buddha, Founder Niwano, and President Niwano, making the Founder’s dream my own. I also wanted to diligently practice what I would learn therein order to help create a peaceful world.

I came to Japan on March 26, 2013. At the time I first came here, I had great difficulty every day because Icouldn’t do anything by myself. When I was in Bangladesh, it was natural for me that my mother always cooked. My family gave me money if I needed it, so I didn’t do anything. I entered Gakurin Seminary, but Icouldn’t speak Japanese and couldn’t adjust to the Japanese life easily. I was too fussy about what I ate. Things didn’t go as well as I wished, and I cried every day. On days when meals were not served at the dormitory, Ihad to make food for myself, but I couldn’t. I just didn’t know how to cook. I felt like I couldn’t do anything, so I considered myself useless. I was gradually losing my confidence. However, I thought that I had to findsomething I could do by myself, so I called my classmates and my mother, and they taught me how to cook a variety of meals. Thanks to them, now I can cook much better than before. If I had not entered Gakurin Seminary, I might have never have learned how to cook.

I needed more fluency in Japanese to learn in Gakurin Seminary for two years. For the first year, I went to aJapanese-language school to learn Japanese. There is one rule in the Gakurin Overseas Leaders Certification Course: First-year students must pass an intermediate examinationin Japanese-Language Proficiency Test during the first year. If we go on to the second grade, we have to attend many teachers’ classes in Japanese at a Gakurin building. So we have to pass the test in December, otherwise we can’t go on to the second grade and study the Lotus Sutra. This rule was a big source of stress to me. To pass the test, I studied Japanese very hard every day and took the test. Iworried continually until I found out the test result inFebruary. Then I cried out loud. I had failed because four points were insufficient for a passing grade. At the time, Ithought, “My Dharma center’s members are waiting for me to come back after I have learned the Lotus Sutra atGakurin. I wanted to help them, but if I return only after a year, what will they think of me? I won’t be able to helpanyone if I can’t study the Lotus Sutra.” I became very sad and I cried, because I had no idea of what I should do at that time and in the future. I felt miserable about myself and my failure and felt embarrassed. I was too ashamed to see anyone, and I could not talk to my Gakurin teachers,seniors, and classmates. And I even couldn’t call my family.

A week later, I was able to send an email to our minister, Rev. Aritomi. I was able to talk with him and received a lot of advice, and I calmed down a little bit. But I felt sad when I thought of how I had to go back to my country, and I cried again.

Afterwards, people at Rissho Kosei-kai International and Gakurin Seminary talked about my situation and gave me a chance to take the Gakurin’s test once again for the second grade. It followed that I could advance to the second grade if I would get more than 105 points out of 180. And I took the test. As a result, I was able to get 145 points and become a second–grade student. After that, I took the Japanese-Language Proficiency Test again in July,and I passed the intermediate test. Furthermore, in December that year, I was able to pass the higher-grade test in Japanese-language proficiency. Since I had to face many hardships in my life, I became self-centered, thinking I had done it all by myself. However, I finally realized that I had been supported by many people around me, and that I didn’t live all by myself. I realized the importance of the people around me.

From the second year, I started to study the Threefold Lotus Sutra and visited a Dharma center in Japan for missionary training. During the first disseminationtraining, I learned the practice of serving the Dharma centers. Before I visited the center, I decided to clean the toilet of the center as my practice because my mind and heart would also become clean through such practice. I learned about this at Gakurin Seminary. It was very good for me to learn this principle, so I could put it into practice during the training.

In the second dissemination training, I went out of the center every day for spreading the Dharma and Iexperienced many things. When we visited nonmembers’ houses and knocked on the door, they replied in an unfriendly voice over the intercom. They rejected us many times. However, both the chapter leader and the area leader who went with me smiled and said to them, “OK. Thank you very much,” even though people in the homes didn’t welcome us. I asked the leaders, “Why can you speak with such people, smiling all the time, even though they don’t welcome you?” They said to me, “There are many kinds of religious organizations, and some of them cheat people out of their money. For this reason, many people think it is not good to enroll as a member.” When I heard this, I responded, saying, “Rissho Kosei-kai is not a bad religious organization. Kosei-kai transmits the teachings of the Buddha and Founder Niwano to make people happy, and works hard to bring peace to the world.” The chapter leader said to me, “Of course, Rissho Kosei-kai is not doing anything bad. We are spreading the Dharma to people who don’t know what the teachings are. It is the founder’s teaching that no matter how hard we are slandered by people or how often we are refused, wereceive everything with an smile and a spirit of appreciation.” At the moment, I felt that there was no place like Rissho Kosei-kai, where I had a chance to learn such a wonderful teaching, and I should study hard while I was in Gakurin Seminary.

I owe a lot of awareness to my life in Gakurin Seminary, and thanks to the grace of the Buddha, Founder Niwano, President Niwano, and the support of all people, I had a precious opportunity to enter Gakurin Seminary. I realized that the Buddha is always protecting and blessingus. I strive to do my best without doing wrong in my effort to follow the Buddha. Thanks to my experience in Gakurin Seminary, I could realize that everyone inherently has thebuddha-nature. I appreciate the buddha-nature in myself, and I have become a person who can express deep gratitude to others. Even after I go back to my country, I would like to practice what I learned in Gakurin Seminary and share it with people around me. In my country, young members are called “the heart of Rissho Kosei-kai,” because they are precious, and are leading our Rissho Kosei-kai. I would like to vow to continue the activities of Rissho Kosei-kai with them, strive for the Dharma dissemination, and diligently practice the Buddha Way.

Ms. Moitri Barua (left) shows her certificate with her class- mates in the lobby of the Horin-kaku Guest Hall after the gradu- ation ceremony of the Gakurin Overseas Leaders Certification Course.