Life’s Various Changes Are the Compassion of the Buddha

This testimony was delivered at the San Francisco Dharma Center during the Ceremony for the Anniversary of Shakyamuni’s Entrance into Nirvana on February 15, 2015. 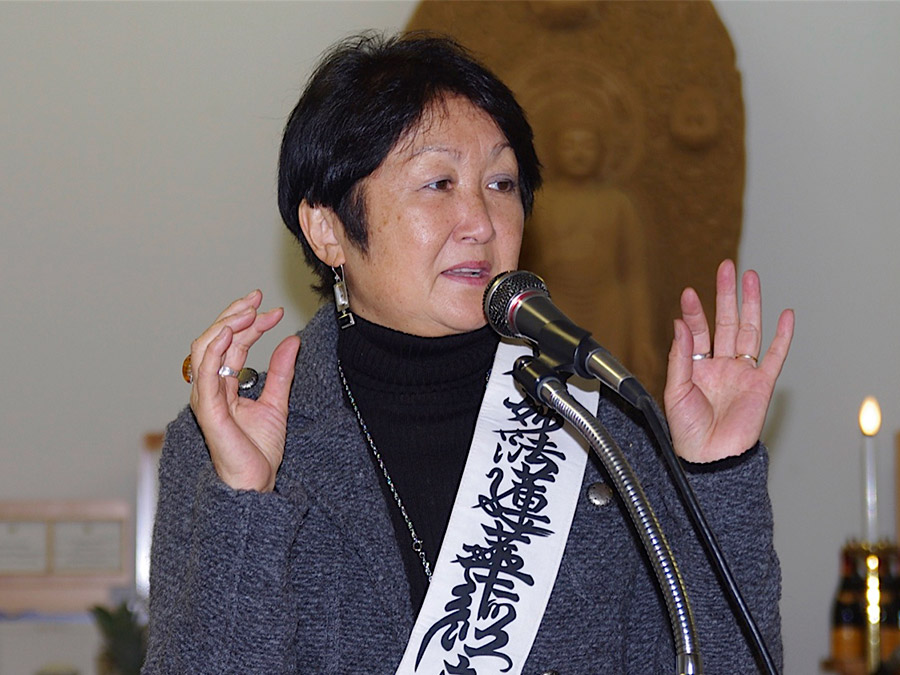 Ms. Sayoko Lesure delivers her religious testimony during the ceremony for the Anniversary of Shakyamuni’s Entrance into Nirvana at the San Francisco Darma Center.

Thank you for this opportunity to share my spiritual experiences on this day, commemorating Shakyamuni Buddha’s entrance into Nirvana.

Last week, Rev. Nagashima, minister of the Dharma center, talked about the Three Seals of the Dharma: All things are impermanent, All things are interrelated, and Nirvana is quiescence. In his death, the Buddha taught us about impermanence. That is, we who were given this life, are sure to die, and things are changing all the time. Taken from the Founder’s book entitled Shakyamuni Buddha: A Narrative Biography, Shakyamuni’s last words to his disciples on his deathbed were, “Monks! I will leave these words with all of you. All phenomena are always changing. Endeavor to practice my teachings diligently.” On that note, the past two years for me have been a real testament of how quickly life can change.

I would like to start my story by telling you that the advertising company where I worked for ten years suddenly got sold in 2013 to a much smaller one. On Monday, July 1, we walked into work as usual, only to find out that with all offices connected there would be a company-wide conference call at 9 a.m. Since we were busy with big projects, we had no idea that there were some dealings going on to sell the company. The company closed the creative departments in the western region, laying off a terrific team of designers, writers and art directors. We were stunned, especially myself. I had never been fired or laid off. I prided myself on the work I did and the leadership role I took on. It was certainly an adjustment to not have a job and to not have to go to work every day.

My husband, Tom, was already in retirement, so I easily fell into a comfortable routine of getting up without an alarm clock followed by a leisurely breakfast and reading the morning newspapers. Occasionally, I got a call for temporary contract assignments which was rather fun because I got to meet different people and experience different studio settings. Having worked full time most of my adult life, this period gave me a chance to slow down to enjoy one day at a time. If something didn’t getfinished or get done in the day, there was a tomorrow.

Around this time, I started attending the Dharma center one weekday a week in addition to my regular Sunday service. Tom, who had been going to the Dharma center with me on Sundays for sutra recitation but then went to the car to read or sleep, started to stay to listen in the seminar on Buddhism and hoza. He was invited to join hoza by one of the members and much to my surprise, he came in and participated ever since. It has been so nice in many ways to have him be part of the Sangha.

However, just as I was getting used to this leisurely life, I started having health problems. After having injured myself stretching too far in a gym class months before, I started having tingling in my toes and then up my leg in my shin and then in my buttocks. The term the doctors used for my condition is sciatica. By this time last year, it had gotten so debilitating that I could only walk a short distance, maybe 20 feet, before I was crippled in pain. I remember in March last year, I attended the Chairmen’s meeting at Rissho Kosei-kai International of North America in Irvine. I had to use a wheelchair at the airport going there from San Francisco International Airport. Coming home, I traveledalone and the gate for my flight at John Wayne Airport was the furthest one from the main entrance. I can’t tell you how many times I had to walk and sit down before I made it finally to the gate.

My calendar during those months was so full of appointments—with acupuncturist, chiropractor, physical therapist, and doctors. Then finally in March, doctors of Kaiser Hospital suggested me that I get an epidural, an injection of steroids into my lower back area to ease the nerve inflammation that was causing the pain. There were no guarantees that it would help and if it did, how long it would last. But I finally felt like my old self after the procedure. I was so relieved to be pain-free that I wanted to catch up with things I had postponed. I met a friend for lunch a couple days later, went to the gym after being absent for fourmonths, took a trip to Tom’s sister and her family in Davis that weekend, etc.

A week after the procedure, however, I came down suddenly one night with a high fever. Our daughter, Emi, and her boyfriend, Phil, were at home and worried that my temperature was so high that they called the advice nurse who said I should go to emergency right away. I spent the next nine days in the hospital with meningitis, which affects the fluids along the spinal column and the brain. It was said that I almost died. Coming home, I couldn’t even take steps without a walker. Reading and using a computer were more than my brain could do. It took over two months to get back my strength, coordination and ability to think.

It’s hard to believe that it was only last year. Since I recovered, I started getting back into shape with a regular exercise class routine. I was able to resume going to the Dharma centerone weekday a week plus Sundays and when needed on Saturdays. Once again, my life fell back into a nice rhythm but at the same time, I missed going to work—having to be somewhere, working with others, using my skill and expertise.

In October, a sporting goods store, REI, was having their fall sale. So Tom, Emi, Phil, and I went shopping to the shop fortuitously. While there we ran into an old friend and her husband and ended up talking for quite some time at the store. About two weeks later, she called me to see if I was interested in working where she had taken a job three months prior. Networking is sure helpful. With her contact, I slid so easily into my new job. Incredibly, it fits my schedule perfectly so that I can continue going to my fitness classes and have Fridays off to go to the Dharma center. My work schedule is very flexible and the work is not stressful. I couldn’t have asked for a more perfect job.

Today I am so grateful to wake up in the morning, looking forward to the day. Having good health, family, friends, and income and work that you enjoy is wonderful. Above all, what I have grown to cherish is the Sangha and all that I am learning in the Dharma center. I used to resist going to the Dharma center, but I realized while writing this religious testimony that I haven’t felt that way for a long time.

In Buddhism for Everyday Life, Founder Niwano says,“Change holds the key to future possibilities. The truth that all things are constantly changing promises infinite potential.” The truth is, I don’t expect life to be perfect, but by learning to accept the ups and downs that come our way, my life is much happier. 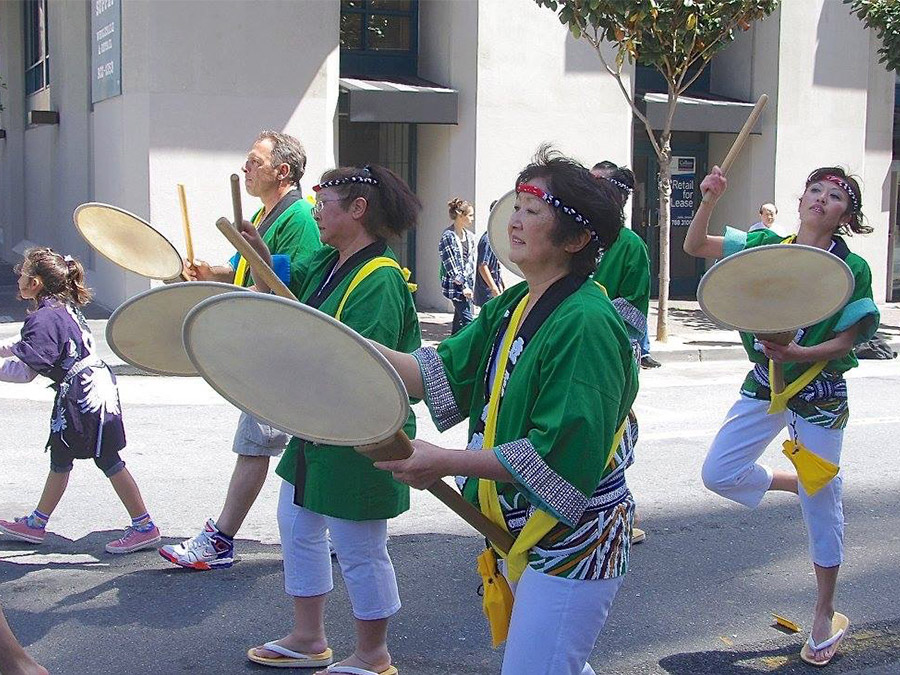 Ms. Sayoko Lesure strikes the round fan drum in the parade of Cherry Blossom Festival (second from right).