Learning the Importance of Consideration for Others

This Dharma journey speech was presented at the ceremony for the Founder Nikkyo Niwano’s Entrance into Nirvana at Rissho Kosei-kai of Brazil in São Paulo on October 8, 2017.

My name is Pedro Cazella Netto and I work as an architect. I am single. Instead of keeping animals as pets, I grow two small plants as if they are my pets.

My first encounter with Rissho Kosei-kai was in 2010. I play the shakuhachi, the Japanese bamboo flute. One day, when I was to give a concert with players of other instruments and a chorus group, a rehearsal was held at the Brazil Dharma Center; it was then that I visited the Dharma center for the first time.

Until then I had hoped to study Buddhism and had read several books about Buddhism, but I had never visited a Buddhist temple. When I was a child, I went to a Catholic school and received a Catholic education. I also received baptism, and I had a very fulfilling childhood. Later, as a school student, I took part in charity activities, collecting groceries and clothes to give to the poor. I also participated in the street theater to praise Jesus Christ. On Christmas Eve, I helped Santa Claus distribute presents for underprivileged children.

However, I gradually began to feel that something was lacking, and distanced myself from the Catholic faith. When I was looking for a faith best suited for me, I encountered Rissho Kosei-kai. I was warmly welcomed and accepted by members at the Dharma center and I began to gradually participate in the Dharma center’s activities.

In Rissho Kosei-kai, I learned a lot of things. Not to criticize others was one of them. I learned that if people do things that you would think inappropriate, there is a purpose or reason that people do so. I also learned that I should not grieve if things do not go as I wish. This sounds somewhat difficult to do, but what it means is that we should change our “lenses” though which we look at things if things do not proceed as we desire. And, most of all, I learned that there is a reason for everything that happens.

Since I was a small child, my parents would often quarrel in front of me. Whenever they had a quarrel, they asked me how they had to behave as parents. As their son, my mind was occupied with my parents’ quarrels, and I was always thinking how I could be a help to them. At present I make it a habit to jot down in my notebook pieces of teachings I learned in the Dharma center, and when I am talking with my mother on the phone I try reading from them, or positively communicating my father’s good points to her. Gradually, I also began to talk about the teachings with my father. When I shared what I had learned with my parents, that Buddhism teaches us is not to blame others but to be the first to apologize, they began to communicate their ideas about the teachings with one another. That my parents came to understand the teachings is the source of great pleasure to me. They have become more harmonious as husband and wife than they had been before.

There was another problem in our family. My father has a younger brother. My grandfather took better financial care of his younger son than he did for my father, and this had been a source of displeasure for my father. One day, I asked my father, “Suppose that my younger sister and I are climbing the mountain and both of us have become unable to move any more on the way, and that you are able to help only one of us. Who would you hope to help?” I know, of course, that my sister needs help more than I do. So if my father said he would help my sister and enable her to reach the summit, it would be a great pleasure for me also. My father understood the intent of the story, and listened to it by applying it to the real-life situation involving him and his younger brother. From that time on, my father stopped quarreling with my grandfather or my uncle. From this, I learned the importance of putting myself in another person’s standpoint as well as the importance of making an effort to know and understand others.

My work as an architect includes designing and building houses. One day, I learned that it was necessary for a few trees to be cut down in order for a house to be built. I was troubled by this and asked the minister, Rev. Nakahara, for guidance. I told him that as part of my job as an architect I couldn’t help but have some trees cut down. Rev. Nakahara advised me, saying: “To build the Dharma center, there was a need to have the trees growing on the building site cut down and as a result the creatures living there would be robbed of their homes. You, too, please make efforts to convert the energy of life of the trees to be felled and the creatures to be sacrificed into good deeds to benefit many people.” Following the minister’s guidance, I tried to respond at once whenever there was trouble with the person who had bought the house. Thanks to this, I believe, I was blessed with many friends. In front of the house, where some trees had had to be cut down, I planted the same number of trees. The trees have grown now, and provide pleasant shade and safe haven for small birds.

I like the Brazil Dharma Center very much. I love members of the Dharma center, this place, and the teachings.

Through participation in the seminars on basic Buddhism, I was able to learn about the suffering I experienced myself. I always look forward to hearing a variety of questions other participants make in the seminars. By listening to stories of Dharma experiences of other participants―including who are suffering from what problems―I am pleased that I am able to see the interrelatedness of all things.

Two years ago, the locally-bestowed Gohonzon(the focus of devotion) was installed in my home altar, and the enshrinement ceremony was held at home. That day became my special day. I offered the sutra recitation and also played the shakuhachibefore the Gohonzon.

I pledge hereby that throughout my life I will always praise others and put into practice warmhearted consideration for others. 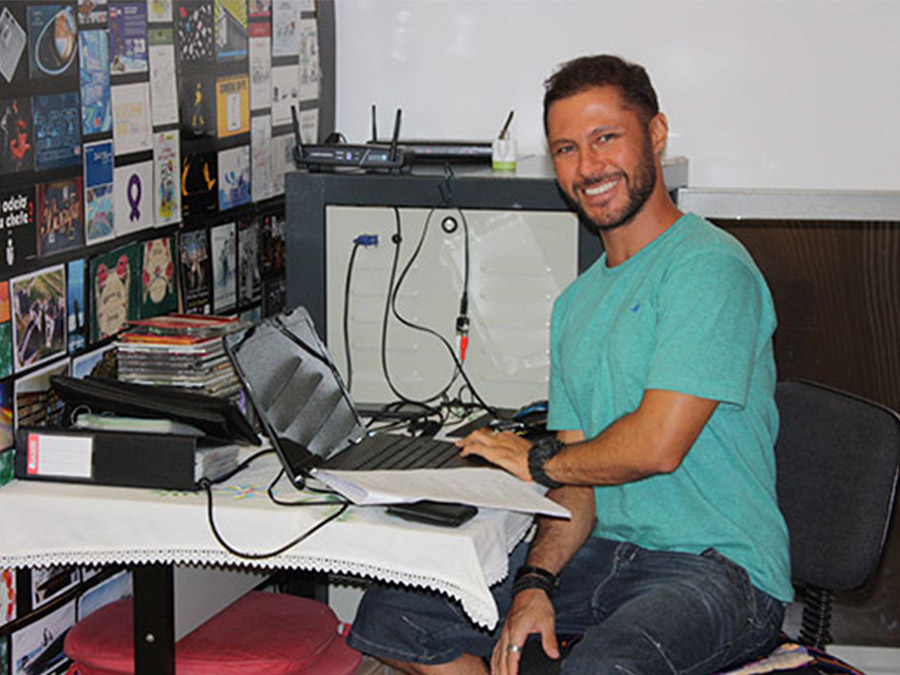 Mr. Netto serves as an audiovisual coordinator for the seminar on Buddhism at the Brazil Dharma Center.