This Dharma experience was delivered during the ceremony of the Uposatha Day at the Great Sacred Hall on March 1, 2017 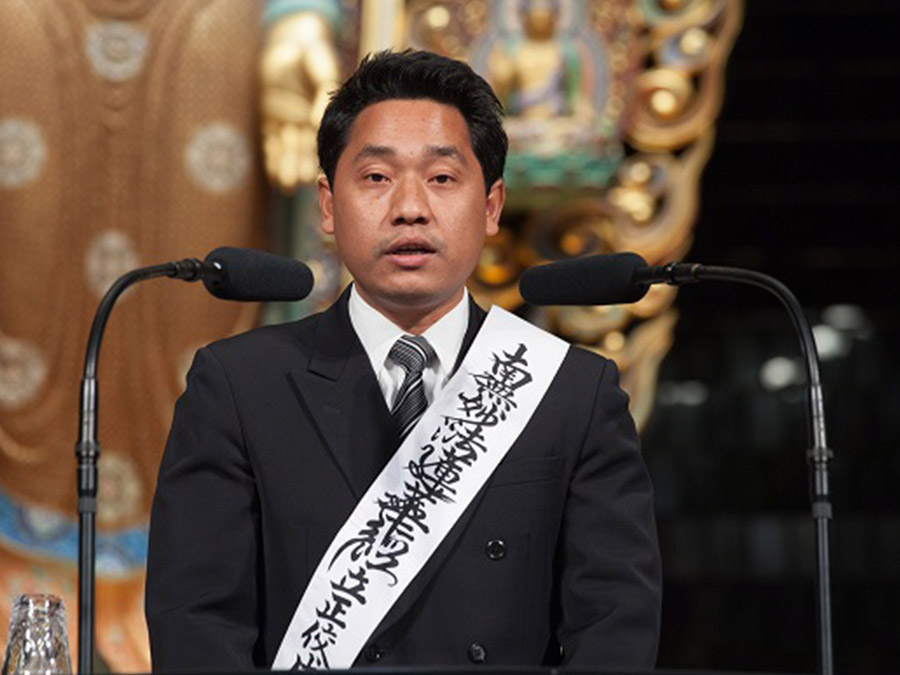 Good morning everyone. I was born on October 15, 1990, in Bandarban, a beautiful town surrounded by nature in southeastern Bangladesh. I was born as the youngest child, with four brothers and sisters. My father worked for the government. I was raised in a family with loving siblings and parents, and we all lived happily together.

When I was five years old, my mother fell terribly ill and was hospitalized. Luckily, after a week of medical treatment she was released from the hospital. However, a couple of months later, her sickness broke out again, which devastated our entire family. My mother was readmitted to the hospital, where they ran various types of medical examinations. However, they could not figure out what type of sickness she had. Her sickness did not get any better. Three years later, she passed away, when I was at the age of eight.

I couldn’t accept my mother’s death and my tears never stopped falling. After her death, the atmosphere at home became gloomy. She always used to cook the food we loved, and she bought us the clothes we liked (especially during the festivals), and most importantly, she was always there for us. Since I was the youngest child, my mother would always bring me with her wherever she went, and held my hand while we went shopping. Each one of these memories are extremely important to me, and I hold them so dear to my heart. Two years after my mother’s death, while we were still grieving, our father walked out of the house and left us all alone. I hated my father for that. I couldn’t believe that our father left us at the time we needed him the most. That was the darkest time of my life.

When both of our parents suddenly disappeared, we didn’t know what to do. We discussed how we were going to survive, as we were still all students at the time, which meant none of us were working. We had relatives living nearby, but no one came to help. To support each other, we started to work as tutors while going to school. My brothers and sisters were always there by my side to encourage me.

I didn’t want people to think that I would become a bad child because my parents were gone, so I resolved that I would never fall into the wrong path. I wished to be a person who connected with the people around me, and to live a happy life. However, it was difficult since I did not have anyone around me guiding me on the correct path.

When I first visited the Dharma center, I was really impressed by all the warm greetings from the members. It made me want to learn the teachings of Rissho Kosei-kai, like those who had greeted me, and to become a kind-hearted person.

At the Dharma center, I was fortunate to meet Mr. Kanchan Barua, the head of the Educational Affairs Group at Bangladesh Dharma Center. He is a person with a warm heart and has always treated me like family.

I received a book, titled Mazu hito sama (Putting others first), from him. In the book it says “We often think we know best about ourselves, but in fact, we don’t. If you would like to know about yourself, you must cultivate your heart and mind.” I didn’t understand the meaning of it, so I asked Mr. Barua about the meaning. He asked me if I had shown my appreciation toward the Buddha, my ancestors, parents, and those around me for living a healthy life. I answered “no” honestly. Then he said to me, “If you do not forget gratitude to your parents for raising you, and your brothers and sisters for supporting you after your parents were gone, and you do not forget gratitude to your ancestors and those around you and express your gratitude to all of them every day, your life will become progressively happier. After listening to his words, I realized that I actually have people around me who are teaching me the right way to live.

Later, I told Mr. Barua about my wish to learn more about the teaching and he told me about Gakurin Seminary at Rissho Kosei-kai’s headquarters, where people could learn about Buddhism. In the seminary, they provide an International Course for people from abroad. Later, Rev. Mitsuyuki Aritomi, the minister of Bangladesh Dharma Center, also advised me to join Gakurin Seminary and helped me enter into Gakurin Seminary. I realized that if I didn’t encounter Rissho Kosei-kai, I wouldn’t have had the opportunity to learn such a wonderful teaching and meet such wonderful people. I’m truly thankful to my friend who guided me to this path.

After deciding to come to Japan, my brothers and sisters gave me not only their full support, but also paid for all the costs. They said to me, “We support you because this is the path you choose.” Thanks to their support, my confidence grew to continue walking on the path I chose till the end. I was really happy about that.

Before coming to Japan, I was really nervous about living with people that I had never met. At the beginning, it was really difficult because of the cultural difference and language barrier. However, living in Gakurin Seminary helped me learn how to cherish all of my dorm mates and understand the importance of time. That was also my first experience living with people from various countries. Moreover, my dorm mates are really wonderful people, who were always by my side helping me whenever I was on my duty or sick.

When I was in the first grade in Gakurin Seminary, I was often scolded by the teacher from my Japanese language school. Whenever I saw my fellow classmates speaking fluent Japanese, I felt depressed. At that time, my senior colleagues of the International Course found out about how I felt and encouraged me by saying, “We were just like you in our first year. It was really tough because we didn’t know Japanese, but you will be fine as long as you do your best.”

After entering the second year, I was assigned to the Kita Dharma Center, in northern Tokyo, for Dharma dissemination training. From the training, I had gained a wonderful life-changing experience. When I went to do tedori (supporting members in the Dharma) practice with the chapter leader, I encountered Ms. A, a member of the Dharma center who has lost her eyesight and most of her hearing. From our encounter, I felt like a ray of hope shone into my heart.

Ms. A didn’t have any children, and was living alone after her husband passed away. Hearing about her situation, I found the similarity of her family’s situation to mine. However, despite her old age and her poor health, she was a warmhearted person and looked very happy. One day when we visited her, she felt my face with her hand and said “What a handsome boy.” At that very moment, I was really happy because she looked at me through the eyes of her heart. Looking at Ms. A, I clearly understood that she had helped me realize that I am still young and healthy, yet still clinging onto the grief of losing my parents. It also helped me realize the reason why I was not able to overcome the grief of my loss; it was because I didn’t have the mindset that everything was the Buddha’s arrangement.

​By being in contact with Ms. A’s warmheartedness, I learned that the Buddha would never give one a test that they could not overcome. It also helped me realize that losing both of my parents when I was a child was because I needed to realize my duty to learn the Buddha’s teachings to help liberate people from their sufferings. Looking at Ms. A, I figured that if I became a cheerful person myself, people around me would be cheerful too. I have also gained the strength to move forward after meeting her. I want to live cheerfully and positively, so that I can make people cheerful just by being present and shine a warm light into their hearts.

Through my participation in the massive hoza (a large Dharma Circle with more people), I could understand the importance of hoza, a lifeblood of Rissho Kosei-kai, and have been given the Buddha’s wisdom and insight.

In the hoza, Ms. B, a member of the Dharma center, said that she was supposed to have her husband’s posthumous name read after the sutra recitation for his memorial day at the Dharma center, but it wasn’t read due to some mistake. Ms. B expressed her gratitude for what had happened, however, saying that because of the incident her husband’s memorial day was remembered anew by the minister, chapter leaders, and her fellow members.

I was really moved by the way Ms. B accepted the situation. If I was in the same situation, I wouldn’t have accepted it the same way she did. I felt that hoza is not only a place where members listen to each other, but a place that helps us to be liberated from sufferings through relating others’ situations to our own.

I strongly believe that the people around me, as well as myself, will be able to be liberated and attain a happy life, by living in accordance with the wish of the Buddha and Founder Nikkyo Niwano. Now, I am able to say, thanks to my parents I have gotten the opportunity to have such wonderful encounters and to learn the teachings of the Founder and President Nichiko Niwano. The most grateful thing after coming to Japan was that my heart has changed.

From the many things that I have learned since I came to Japan, I want to spread the idea of “everything is dependent on you” which means the result of your actions will link back to you, to the people in my hometown, Bandarban, Bangladesh. When you cannot reach the result you are wishing for, you will never overcome suffering if you only blame it on those around you, but not yourself. Once you grow into the mindset that you should be responsible for whatever happens to you, the situation will change too.

I would like to work my best to start a branch of the Bangladesh Dharma Center in my hometown, so that everyone living there will be able to learn the teachings of the Buddha, and have a place where sangha members can practice the Dharma together. 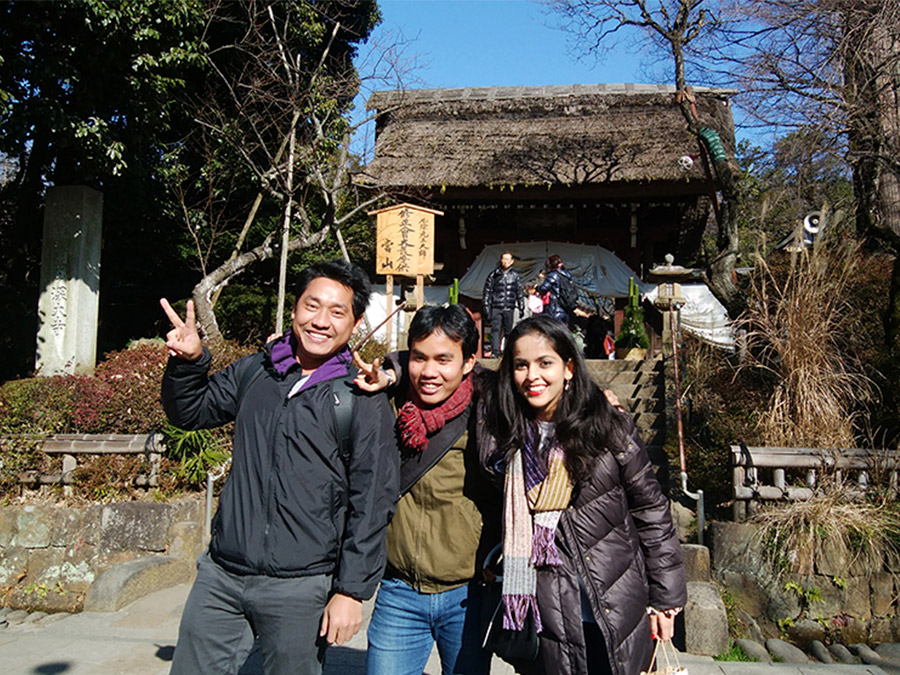 Mr. Marma with his classmates from Gakurin Seminary International Course.