Leading an Honest Life in Keeping with Buddhist Teachings

This spiritual experience was delivered during the New Year’s Gathering at the Brazil Dharma Center on January 25, 2015. 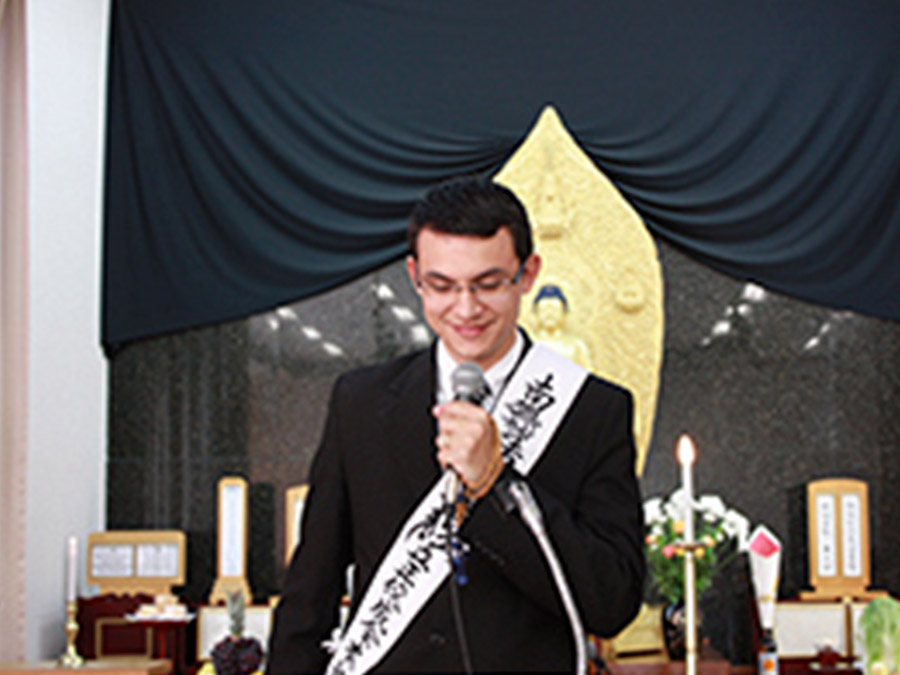 Mr. Santana delivering his spiritual experience during the New Year’s Gathering at the Brazil Dharma Center.

Good morning, everyone. I am grateful for this opportunity to speak of my spiritual experience at the New Year’s Gathering today. It is my pleasure to spend such a meaningful day with all of you.

I participated in the World Sangha Representatives’ Gathering for the 50th Anniversary of the Completion of the Great Sacred Hall in March of last year. I would like to share that experience with you.

I departed for Japan with Rev. Kazuyoshi Nakahara, minister of the Brazil Dharma Center; Ms. Hiromi Sasaki, the assistant minister; and Ms. Karlla Burger de Freitas, a member of the Dharma center. On March 4, one day before the main ceremony, the ceremony for the Founder’s Memorial Day was held at the Great Sacred Hall. It was the first experience I had ever had at the hall within RK headquarters. The statue of the Eternal Buddha is about five meters high. There are hundreds of chairs on the main and fourth floor, and on each floor are there are chairs prepared for visitors. The Great Sacred Hall is so huge it reminds me of the Basilica of the National Shrine of Our Lady of Aparecida in Brazil. I was brought up as a Catholic, and in my childhood, my mother took me to the Basilica several times, and I had good experiences. You may know of the basilica well.

The ceremony at the Great Sacred Hall was so wonderful. I was moved by the spiritual experiences presented by Rev. Kris Ladusau, minister of the Oklahoma Dharma Center in the United States. She is the first American-born Reverend for Rissho Kosei-kai. She shared the story of Mr. Ray Slaten, a veteran of the Vietnam War who had visited the Oklahoma Dharma Center to search for his own inner peace. He joined the ceremony, but could not be in the same room until the ceremony was over. The reason was that the sound of the drum had reminded him of bombings. Mr. Slaten suffered from PTSD (post-traumatic stress disorder) and, because of this, his attention span was only about five minutes long. He practiced the teaching at the Dharma center under the guidance of Rev. Ladusau, and as a result, not only was his attention span extended but also he had opportunities to practice generosity for others. Rev. Ladusau’s words, “No amount of money could ever equal the treasure that I have been given in this lifetime, and I am eternally grateful,” remained within my heart. I love the talk of spiritual experience in Rissho Kosei-kai. It is the best way to learn the teaching of the Buddha, and it is a good opportunity to learn the importance of listening to others speak, as well. At the Brazil Dharma Center, we study the teaching based on the world sangha’s spiritual experiences that publish in the on line edition of Living the Lotus in Portuguese.

I want to share with you one more experience of mine. It was a special hoza with the presence of Rev. Nakahara and Rev. Yuji Numata, director of the Dharma Missions Bureau [at Tokyo’s headquarters]. When we left Brazail, sangha members recommended to me that I should talk about what I want to, and not miss a chance. This hoza was my first opportunity to do so. I told Rev. Numata that I had difficulty in conveying to others what I had studied at the Dharma center, and that I felt others did not show any interest in what I had said. I asked him how to sort these issues out. Rev. Numata kindly told me that it was wonderful that I had that kind of feeling.

He then explained in an easy-to-understand manner about the ten realms of existence that we would feel every day. The “ten realms” refer to our mental states that we easily change according to a situation. For example, when we are caught in a traffic jam, we will be mentally in the realm of hell. When we are hungry and irritated, we will be mentally in the realm of asuras. When we get home and eat something delicious, we will be mentally in the realm of heaven. He went on to teach me that human beings are always cycling from one to another of those mental states, and they are always mentally unstable. Because of this, they are always feeling suffering. We need patience when we want to tell something to others. At first, we must carefully listen to what other say until we get a sense that they understand us, and feel at ease. And then he taught me that it was good to talk about what we thought was important. At the time, Rev. Numata asked me if I had felt relieved, so I answered “yes.” Soon after I replied, my heart was racing with excitement, so that I could not concentrate my mind on what he was saying. However, his explanation was very easy to understand, so I soon was able to listen to him calmly and carefully. He said, “When you open your heart first, then other will also open their hearts.” I thought it the important point. At first, I should listen to others, and then I should start to talk when I feel it is timely to do so. I learned that if we listen to others earnestly, then will they be also earnest to do so too.

Here, I would like to talk about my most recent experience. The other day, I was walking home from the parking lot with my wife through the children’s playground. I found many children playing there. And among them we found a little girl, Mari, who always plays there. Mari loves my wife, and she comes running to my wife and hugs her whenever she sees her. As usual, she came running to us and hugged my wife on that day. My wife asked Mari, “Don’t you hug Stefano, do you?” Mari turned her face toward me and hugged me. Suddenly, someone kicked me with his foot. Surprised, I turned back to see who it was. I found a six- or seven-year-old boy. My wife told him to stop it, but he kept punching and kicking me, and I could see no sign of stopping. Even though I said to him, “Why do you act like that?” he continued to do so, abusing me. When I extended my hand to shake hands with him, he strongly slapped my hand. At that moment, I realized that I had said something stupid. When I said to him, “You like Mari,” he abused me, saying, “You’re mad,” and kept using dirty language. I didn’t have any idea as to what to do, so as a last resort, I said to him, “I like you.” Then he looked surprised and stopped kicking me. On that day, I participated in the seminar on Buddhism, where I had listened to the lecture under the theme “The Power of the Repeated Words.” In that seminar, Rev. Nakahara said to us, “We are always affected by the words and acts of the people close to us, and the formation of our characters start in connection with our parents when we are children.” I had known about that boy before that time. I have seen him quarrel with his parents, and seen his father say nasty things to him. The boy’s attitude toward me was exactly the same as his father’s. I have been studying at the Dharma center for few years, and I have been careful not to use violence against violence. When the cause in myself (my thought and action) meets with its appropriate condition, the result comes forth. When I change my action, the result also changes accordingly. I came back home, and I was very glad that I could reflect on myself through this incident. If I would fight with the boy, I am sure I would not have received this sense of joy. Next time I meet him, I hope the boy will change his attitude. And I think I should be considerate of others when Mari comes to me.

I appreciate meeting with many people special to me both at the Brazil Dharma Center and in Japan. If I had not encountered the teachings of Buddha, I would have led a completely different life. As President Niwano says, we consistently keep working for peace. The staff members of Rissho Kosei-kai’s headquarters are helping us deepen the relationship among our sangha members. I am grateful to my wife, Viviane, who supported me to visit Japan. I am grateful to the people in Japan for preparing to welcome us. They worked very hard to make our stay wonderful. I hear that the world is moving in the wrong way and is being moved in that direction by economic desires. I would like to vow to practice diligently, so that I will lead my life honestly life in accordance with the teaching of the Buddha. I am hoping that I can find a way for everyone to be happy and that I can make people around myself happy. 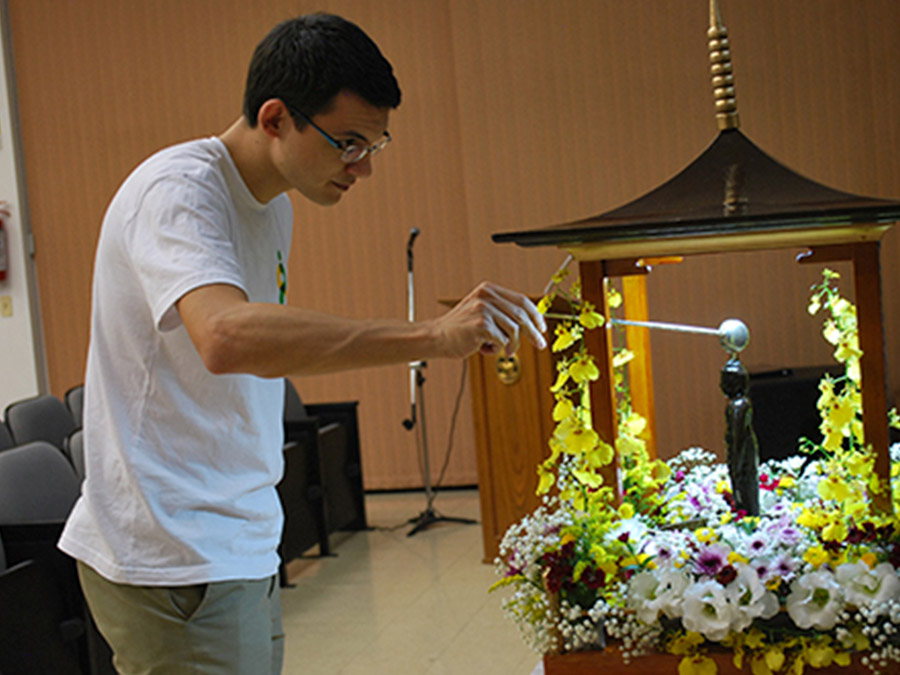 Mr. Santana pouring sweet tea onto the statue of the infant Buddha at the Ceremony of the Anniversary of Shakyamuni’s Birth at the Brazil Dharma Center.