In the Bosom of Buddha’s Compassion

The following religious testimony was delivered at the 5th anniversary celebration of Rissho Kosei-kai of Bangladesh on February 22, 2013. 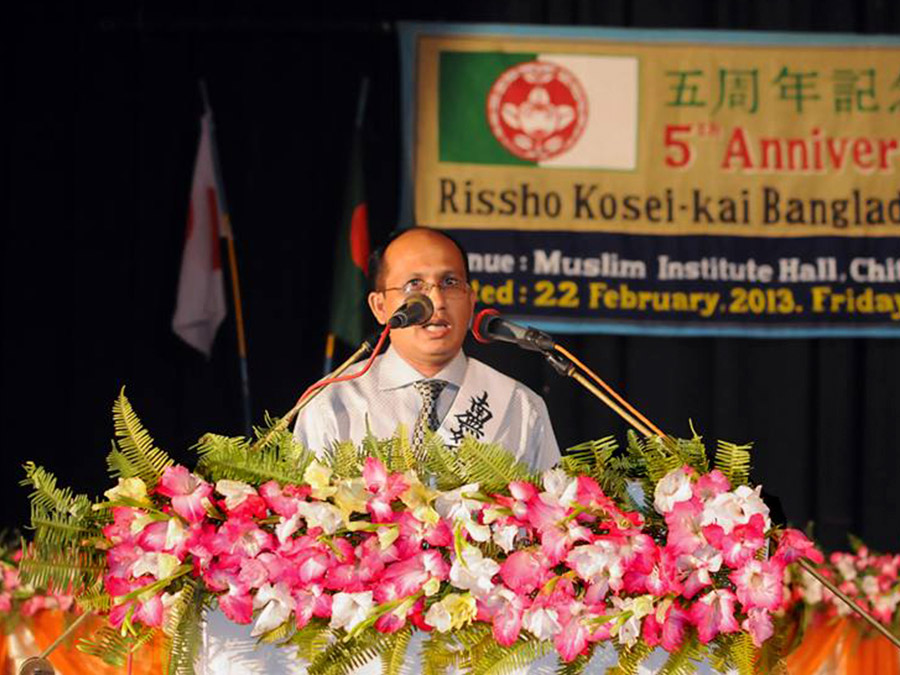 Mr. Singha delivers his testimonial during the fifth anniversary celebration of Rissho Kosei-kai of Bangladesh.

Everyone, please guide me.

I would like to express my gratitude for this opportunity to share my spiritual experience with you today.

I am Suranjit Kumar Singha. I am deeply grateful to be living happily with my wife, our ten year old son, and our three year old son.

My previous goal was to become rich by making a lot of money in business. At that time, I was not very interested in religious faith, and usually I just participated in events of at our neighborhood temple. I think I was doing essentially what most people in society do.

I didn’t become rich, but I do manage a small companynow.

When I became a member of Rissho Kosei-kai, I soon put into practice at home what I had learned there. Through seeing my practice, my wife was delighted and began to support me more than she ever had. Thank you for always supporting me. And thank you, Rissho Kosei-kai.

For the past three years since becoming a member of Rissho Kosei-kai, I have led more than fifty people to join. When I received my Gohonzon, I felt so much joy. After that, I received the Dharma Teacher’s title from President Niwano. I have never been happier in my life.

I had an incident that made me realize how the Buddha always stays beside us and how vital the teachings are. The expected date of delivery for my second son was also the memorial day of my home. We had to take my wife to the hospital following our doctor’s instruction. But by 7 p.m, our baby had still not been born. I was irritated that I could not offer sutra recitation for my home’s memorial day. I asked my mother-in-law to care for my wife, as I returned home to offer sutra recitation. Soon after I finished offering sutra recitation, I received a phone call from the hospital, saying that my son was born. I realized again the power of the teachings and the Buddha’s compassion, and my heart was filled with joy.

The Buddha’s compassion is as deep as the sea, and wecannot explain it in words. No, words cannot explain the joy of the faith by words. But through practice, definitely we can feel this joy.

Next I would like to talk about a staff member workingat my company. I had built a relationship of trust with him. One day, however, he stole money from my bank account. When I found out about this, I felt like killing him. But when I thought about it for a while, I began to think that I might have been responsible for his act. Then I thought that Ishould forgive him, and the next day he came to me and apologized for doing such a bad thing. He promised that he would pay me back the money he had stolen. I was able toforgive him, thanks to the teachings. Rissho Kosei-kai brought me this teaching.

I have always been taught that the Buddha shows us various situations to make us improve and grow.

One day, something interesting happened to me. When I returned to my country from Japan via Malaysia, Rev. Norimasa Aritomi suggested to me that I should stay in Japan two more days and return to my country with the other members. At that time, I had to go back soon, so I didn’t follow his advice and returned by myself. However, when Iwas in Malaysia on the way home, I lost my passport and money. I was at a loss as to how I could return to my country. I explained the situation to police, followed various legal procedures, and finally had my passport reissued. I was able to eventually return home. After coming back, Ireflected and realized that Rev. Aritomi words were themessage of the Buddha. Through this experience, I have realized anew that the Buddha puts us in various situations to make us improve and grow. So now, when anyone says something, I regard it as important.

I am very grateful that I could encounter Rissho Kosei-kai. I have pledged to disseminate the Dharma in my hometown in order to spread the teachings to as many people as possible. I have walked to disseminate the Dharma and realized how hard it had been for the Buddha to walk so far for his teaching ministry. Someone said me that I had been taking advantage of Rissho Kosei-kai in order to make money. Hearing these words, I decided to dedicate myself more to the dissemination of the teaching. The Buddha disseminated the Dharma until the moment he died, so I, too, will disseminate it as he did.

Thank you very much for giving me the opportunity to share my religious testimony today. I would like to express my thanks to many people from my hometown who tookfour hours by bus to attend this ceremony.

I will never forget this day. I would like to conclude my spiritual journey by pledging to disseminate the Dharma as long as I live. 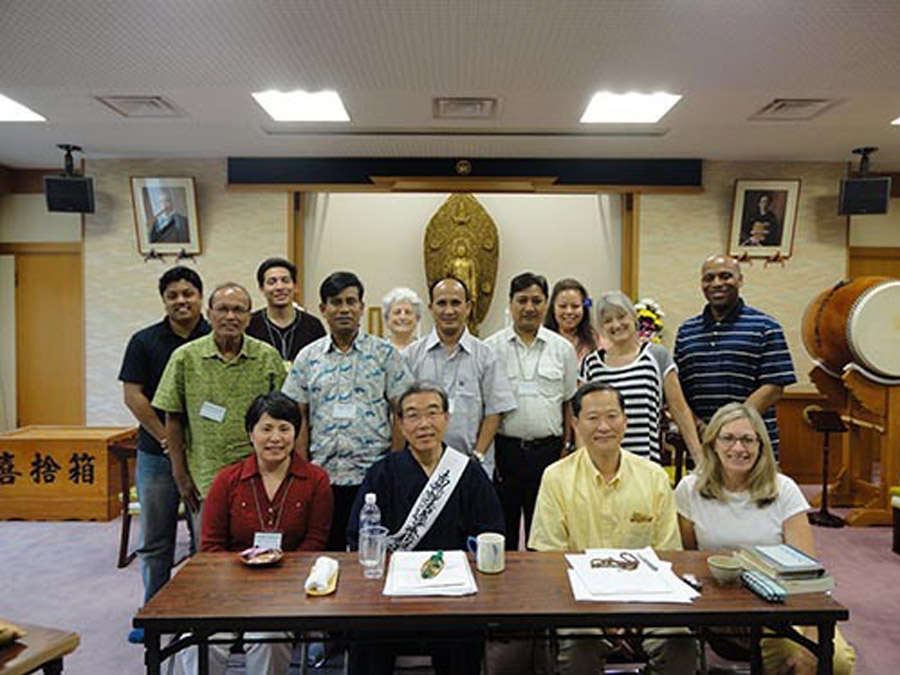 Mr. Singha (the third from left in the second row) attends the Advance Leaders Training at Rissho Kosei-kai International in Tokyo.