How I Saw the Buddha in My Mother

This religious testimony was delivered during the ceremony for the first day of the month and the uposatha day ceremony at the Fuchu Dharma Center, Japan, on July 1, 2015. 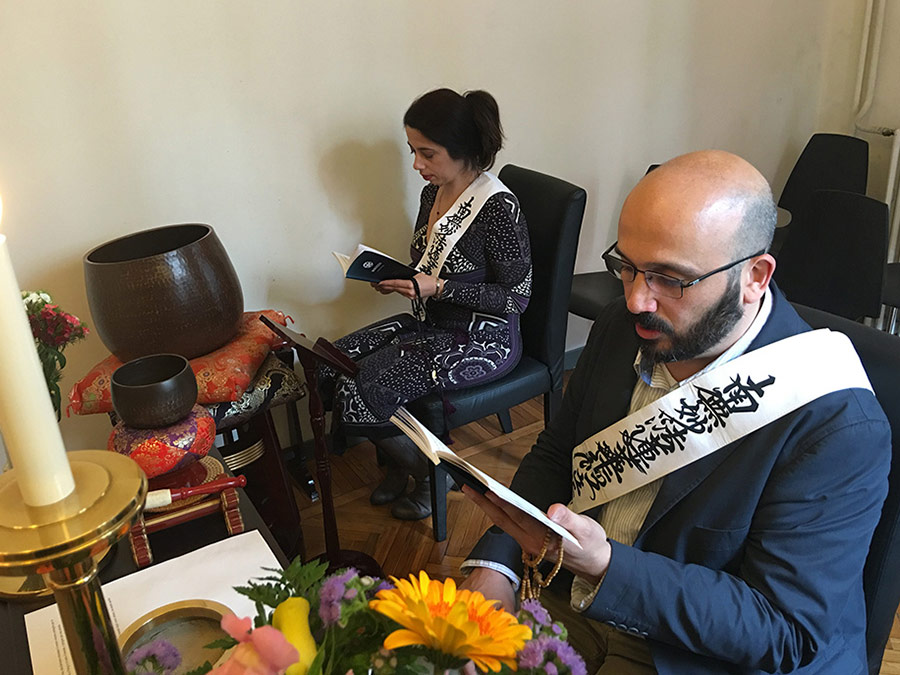 Mr. Nicola serves the role of chanting leader at the Rissho Kosei-kai of Rome.

Good morning everyone. My name is Nicola Tini. I came from the city of Rome in Italy, and I am a member of Rissho Kosei-kai of Rome.

I am a first generation member of Rissho Kosei-kai because there are not very many Buddhists in Italy. As you know, my country is the home of the Vatican, the so-called “center of Christianity.”

Twenty-one years ago, I joined Rissho Kosei-kai (simply called Kosei-kai). At the time, I had heard about Buddhism at Sapienza University of Rome and I was highly interested in it. After some research and study, I heard about the Lotus Sutra, and I wanted to practice it. Among the many religious organizations based on the Lotus Sutra, I asked for information from Kosei-kai, sending a letter to the headquarters in Tokyo. They replied me telling me there was already a sincere member of Kosei-kai in Rome. So I met that member; his name is Koichi Kawamoto (presently, director of the Chuo Academic Research Center). He was studying religions in Rome and he could speak Italian very well. After meeting with him, I decided to join Kosei-kai.

At that time, my mother was in a deeply depressive state and she had fallen into alcoholism. I tried to help her, and I guided her to the Dharma. My mother became a faithful Buddhist and she chanted the o-daimoku and the Lotus Sutra every day. But she could not stop drinking, and our family situation became worse by the day. My sister didn’t want to talk to her anymore, and my mother had many quarrels with my father.

Back then, I could not understand the situation, and my faith became weaker. I thought, why isn’t the Buddha helping us? Why doesn’t he heal my mother? What’s wrong?

Even if in such a bad situation, my mother never lost hope, and she always chanted the o-daimoku and kept her faith in the Lotus Sutra. Many times, she was the one that encouraged me to do sutra recitation every day.

After some years had passed, my mother fell seriously ill due to alcoholism, and she had serious troubles with her liver and stomach. One day, when she vomited blood from her mouth, my father and I decided to take her to the hospital.

Her condition was very serious and she had to go into surgery. After the operation, the doctors told us that it wasn’t certain that she would ever recover. Every day, each member of my family (my father, brother, and sister) went to see her. I chanted the o-daimokuto her while she was in that desperate condition.

Finally, she regained consciousness and, thanks to the transfusion of blood she had in the hospital, there was no more alcohol in her veins. So she was back to her normal self; the kind person I knew she was. She had a chance to ask for my father’s forgiveness, and she made peace with my sister.

We brought her back home, and it seemed that all was going to end well. We were happy.

But after a few days, her condition became very bad and she lost consciousness. We had to take her back to the hospital. This time her situation seemed really desperate, and beyond any possible recovery.

One night, I was watching over her in the hospital. Suddenly, she opened her eyes and looked at me. Then, she passed away. When it happened, I whispered in her ear not to worry, for I was sure that the Buddha was coming to bring her to the Land of the Tranquil Light.

Without Buddhism, I would probably not be able to handle such a hard situation, nor to face serious problems such as a parent’s death in the hospital. It was in this situation that I realized how much Buddhism had helped me and changed my life.

Someone could think, “Why are you happy with Buddhism? Your mother passed away and she wasn’t healed of her sickness.”

It is true; she wasn’t healed. But she had the opportunity to regain her consciousness and to make peace with my father and sister and to ask forgiveness for what she did. I think both I and my family, and even my mother, learned a lot from this.

After her passing away, a Dharma center was established in Rome by Rissho Kosei-kai. I decided to work there to repay my debt of gratitude to the Buddha, to the high priest Nichiren, and to the Founder and Cofounder. I was admitted to work there as a staff member and now I have the wonderful opportunity to come here to Japan to attend the presentation ceremony for the Dharma Teacher certificate.

I hope that, as a dharma teacher, I will be able to repay my debt of gratitude to my mother.

I will do my best to work as a bodhisattva who has sprung up from the earth, and as a disciple of the Buddha and the Founder and Cofounder. I also would like to thank all of you for your warm hospitality and welcome. 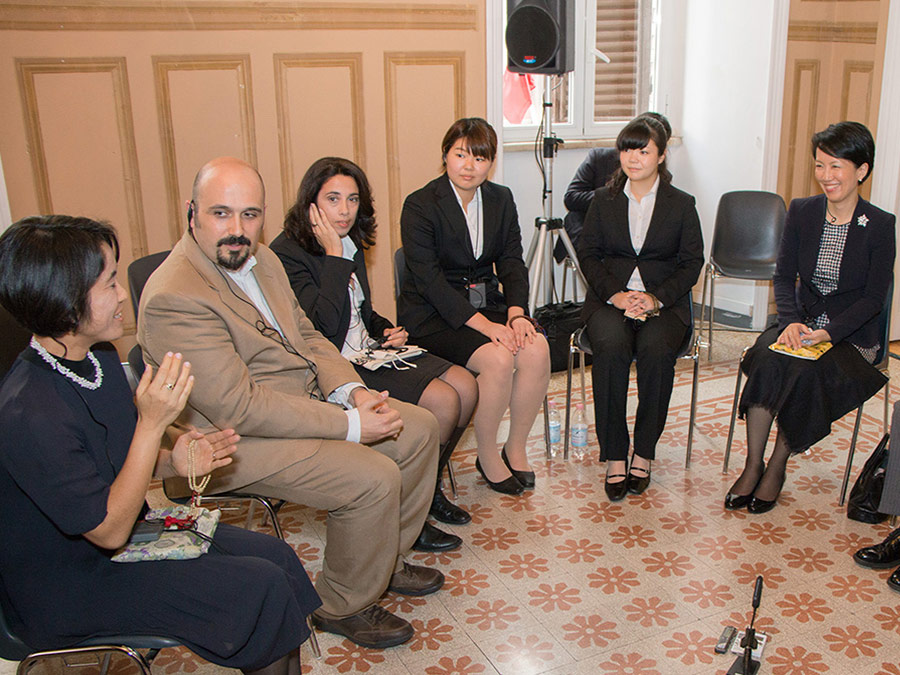 Mr. Nicola (second from left) participated in the gathering with Rev. Kosho Niwano, president-designate of Rissho Kosei-kai, and the members living in Europe.