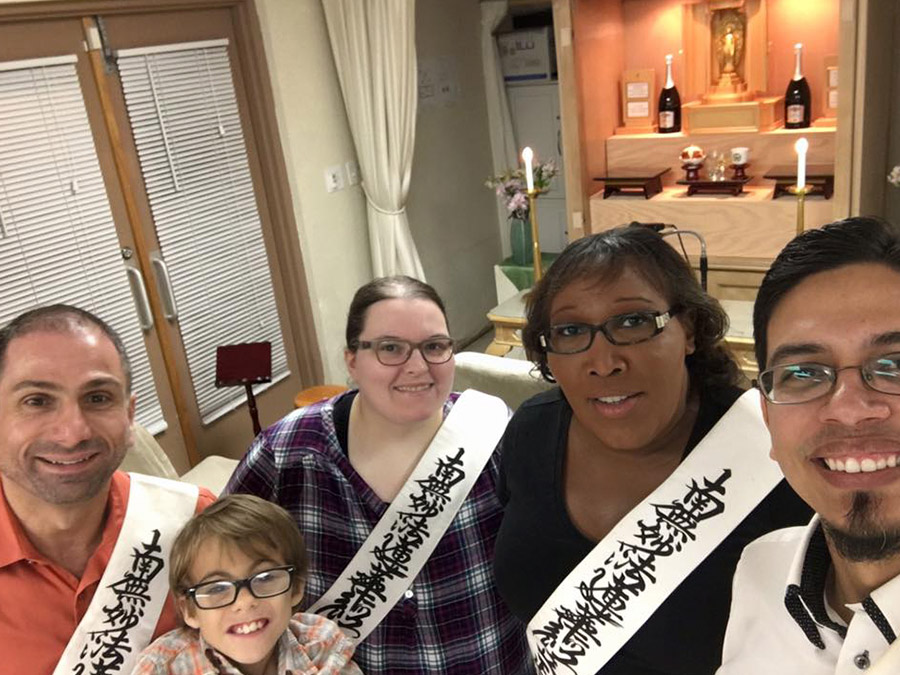 I was brought up in a small town in North Carolina. My family expected the youth to be educated, well-mannered, and know some form of spiritual guidance. North Carolina is commonly known as the “Bible Belt,” so usually the guidance came from Christianity. As a youth going to church, we were asked to do many activities as ushering, food prep, cleaning, and summer bible studies.

It wasn’t until I was in my twenties that I received a gift from my neighbor who was of the Muslim faith. She told me that she had studied many doctrines of religion before finding comfort in teachings of Allah. She said that I should have my own path and form my own relationship with a higher power. She said once that relationship is formed, I can name the higher power. I chose Universal Life Force.

I have walked into many different churches practicing many doctrines: Christian, Jewish, Catholic etc. What I find comfort in is knowing that most religions practice love, compassion, and peace. So it’s no coincidence that I would find my way to these practices, but through a path I had not expected.

In October of 2013, I was suffering from life’s troubles of relationships or lack thereof. I kept wondering what I had done in past lives to create such rejection in this one. So on a Sunday morning I decided to do a fast, and let go of food and electronics for the day. I felt the best way to clear my mind would be to go for a spiritual walk. I felt that if I let go of things for the day then maybe I would receive some message back. Little did I know the wisdom that was to follow. During my walk I gained many messages through meditation and was about to make my way home when a stern voice said, “Keep walking.” I thought I had gained some insight on things, so I answered, “Are you sure?” So again the voice said, “Keep walking,” so I kept walking. Within a few steps the truth came to be revealed to me and one thing that was said was “In your next life there will be joy and peace.” I thought, “Wow I’m going to heaven when I leave this life,” but little did I know that my next life would start the next day.

I had not received the Dharma yet; that would come later in the day. As I walked back towards home I passed by the Unitarian Universalists campus, which was home to Rissho Kosei-kai of Tampa Bay. The UU morning service was over so I was able to talk to a member and ask what Rissho Kosei-kai was and received information on their services. Later that day I would end my spiritual journey attending a service on Buddhism, something I knew almost nothing about.

In my quest to walk a spiritual life I had learned of many doctrines in religious faith but never Buddhism. I met with Rev. Nick Ozuna and the sangha there and learned my first teaching. Rev. Ozuna spoke of how I was responsible for my own sufferings. Not the people who I thought caused my suffering, but just me. Those people were living their happy lives while I was suffering for nothing. I had heard this before, but that day I truly received it. He spoke of the Four Noble Truths and how this practice would help to see the cause of my suffering. His talk, and the kindness I felt from the sangha there, was a much needed end to a day, but it was just the beginning of my next life.

I would continue to go to services and classes taught there as well as research Buddhism on my own. On November 12, 2013, I joined Rissho Kosei-kai of Tampa Bay with great joy and peace. Shortly after joining, Rev. Ozuna shared with the sangha that we would be taking on a new journey with Rissho Kosei-kai International of North America (RKINA) and that he would be moving to Los Angles. I knew I had to learn as much as I could before he left. I would learn how to set the altar for the Dharma Center and learn the fundamental teachings that I could practice in my daily life.

I really didn’t know if the Dharma center would stay around, but other members there wanted things to go on and we stepped up and kept things going. After Rev. Ozuna left a few months later, I started to teach a class on Basic Buddhism along with another leader of the sangha and we just kept doing what we felt the Buddha would want.

I do remember sometimes how I was left alone to set up the altar, since Rev. Ozuna showed me how to do it and entrusted me with it before he left. I wanted to show others how to do it but they didn’t seem to be interested. It seemed to frustrate me but then I was told by Rev. Ken Nagata of RKINA how I was chosen to be there for the Buddha. He spoke of how I was to give my time to make sure that care was given to each sacred item and take pride in how it looked. Also, I learned to have a positive attitude while I did this so that when I shared the Dharma, it would come from a positive place. This advice would change the way I see things every day.

I had spoken to Rev. Ozuna before he left on what it would take to become a Dharma Teacher because I wanted to be there to conduct ceremonies in his absence. He called me a few months after moving and encouraged me to elevate my practice by inviting me to take the Advanced Seminar on the Lotus Sutra. I felt the changes in me of wanting to be there for others. I had become one of the leaders. I would go on to complete the two-year Advanced Seminar as well as many online courses offered by RKINA.

I found that the teachings of the Lotus Sutra allowed me to better understand the lessons in my own life. For example, in chapter 20, the Bodhisattva Never Despise comes through in my life with my step-father. He never holds a grudge or gets mad over petty things. He says it is a waste of his energy. Having him and meeting my Dharma brothers and sisters during classes helped me to self-reflect on how I should try to live my life.

When I came to reflect on my relationships, I thought I had met someone who was the perfect guy for me, but I never told him my true feelings. We had a great friendship and he had mentioned having feelings for me so I just thought he was waiting for the right time to go to the next level. Well that day came, as I saw pictures of his new younger girlfriend. I asked what he thought about us and he told me he never knew that I had feelings for him. I was broken. My sangha family would help me and show me how the teachings would help me look at my suffering from a different perspective. It would be a year before my friend and I would speak again and when we did I thanked him for being honest to his path and I realized it wasn’t up to him to know my feelings.

This helped me to see his buddha-nature more clearly, just like the Bodhisattva Never Despise. Because of my Buddhist practice and self-reflection, I was able to start rebuilding our friendship and now we are honest friends years later. I trust the teaching that everything changes, especially our growth if we practice diligently.

Rissho Kosei-kai’s teachings truly resounded within me. The things that stand out the most have been the stories I’ve heard of Japan regarding Founder Nikkyo Niwano and the Cofounder Myoko Naganuma and their devotion to sharing this wonderful Dharma. To think that such a simple thought of meeting in someone’s home and doing missionary work to help others would truly become known over the world as Rissho Kosei-kai is simply amazing.

In 2016, I had the chance to visit Japan for the first time for the fourth World Sangha Assembly and was deeply moved by the people I met and the experiences I had. Over 1,000 people attended from all over the world and I could sense how committed people were to these teachings no matter where they came from or what kind of background they had. At a small hoza following the ceremony for the World Sangha Assembly, we happened to be joined by Rev. Masuo Nezu, a former secretary to Founder Niwano. I was so overwhelmed with receiving this merit and being able to talk with him directly. Through this great encounter, I came to learn more about Rissho Kosei-kai’s history and Founder’s and Cofounder’s spirit. On this same trip, I had the honor of receiving my Gohonzon along with 798 others. To walk across the sacred stage in the Great Sacred Hall at the organization’s Tokyo headquarters is something that’s beyond explanation and I will treasure it for the rest of my life.

I found that the hopes and dreams of our leaders are truly there in Japan. If I hadn’t been a member then, the spiritual joy that I found in Japan would defiantly make me want to join. I was able to feel the spirit of the Buddha everywhere we visited. I was so grateful to Founder and Cofounder for the path that they left for us.

Since Rev. Ozuna moved away from Tampa Bay, attendance had dropped significantly. As the new leader, I learned to be flexible and learn that people come and go on their own path and that I just have to be there for them when they need me. Sometimes I would end up being the only one there. Sometimes this would be frustrating and discouraging since I made the effort to be there, but I came to learn this was a precious opportunity for me. It would make me give my all to the day. I make sure to properly set up the altar as if the Buddha was there just for me and I would go through the practice of sutra recitation with sincerity. Even if I am by myself, I usually feel the spirit of the ancestors with me welcoming the Buddha and the teachings.

Lately, I have been able to attend the Online Sangha offered by RKINA. This has been a great opportunity for me to keep connected with the larger sangha and help encourage my practice. I am always so grateful to participate in hoza and listen to the practice of other members and it reminds me of the true value of Rissho Kosei-kai as a means of finding happiness through working with others. I find great peace in the teachings that I have received from Rissho Kosei-kai over the years and I know that this is only the beginning. I just can’t wait to see what the Buddha has in store for me. I know that I’m responsible for my own sufferings, but through the teachings, I have come to learn how to transform them into new opportunities. This I have found is the true compassion of the Buddha. I am extremely grateful for all the compassion the Buddha has given me so far, and I know I will be ready for whatever the Buddha brings me next. 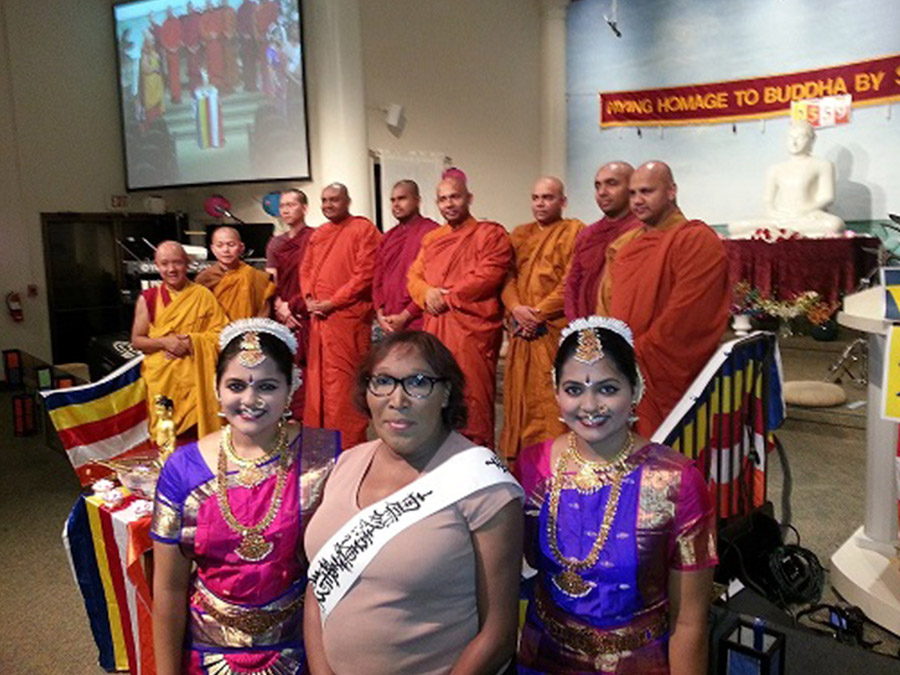 Ms. Fain (center) participates in an event at the Unity Association in 2015.