by Ms. Seunghee An

This spiritual experience was recounted at the Dharma Center of Korean Rissho Kosei-kai on March 27, 2015, during the memorial service for the forty-ninth day after the death of Rev. Boksoon (Kyoko)Lee, the center’s previous minister and later its consultant. 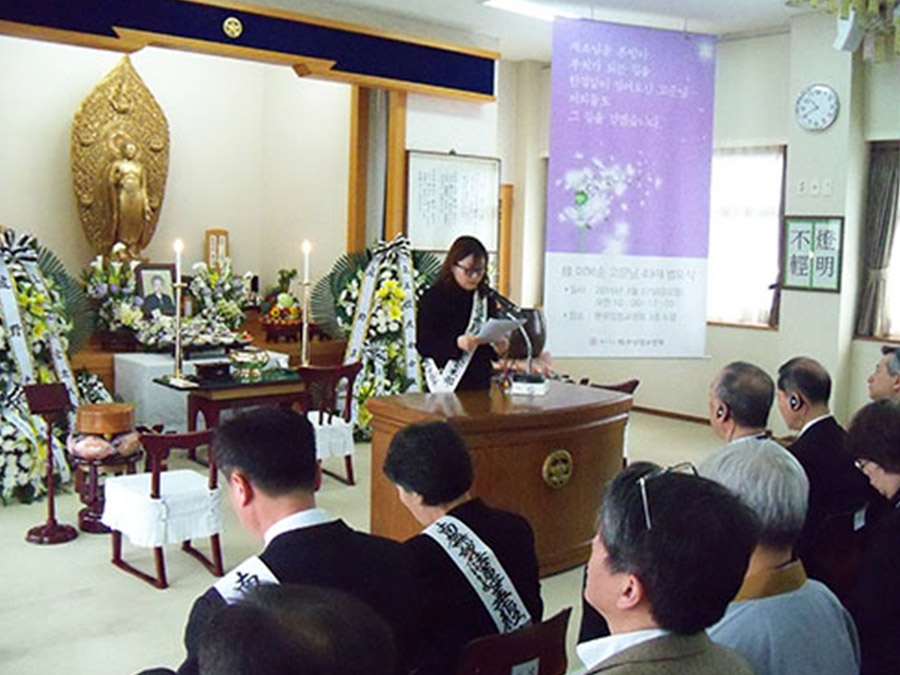 Ms. Seunghee An delivers her spiritual experience during the memorial service for the forty-ninth day after Rev. Boksoon Lee’s death.

When I think of her, a warm pastel color always comes into my mind. But I infer that she must have experienced many hardships until she had developed the warm personality that color symbolizes.

In 1973, Rev. Lee became a member of Rissho Kosei-kai in Osaka, Japan. In 1979, Korean Rissho Kosei-kai was established in Korea and since then, she had devoted herself to disseminating the teachings of the Buddha and Founder Nikkyo Niwano.

I believe that her life must have been far from uneventful.

Thanks to her efforts, we are able to be here now and to encounter the Sangha who learn and practice the teachings of the Buddha and the Founder.

When we were at a loss how we should put the Buddha’s teaching into practice in daily life, Rev. Lee never failed to teach us in detail as well as in an easy-to-understand manner.

When some members shared their sufferings in hoza, or the Dharma circle, Rev. Lee was sure to provide them with an assignment to be practiced at home, after she gave them the Dharma connection between their sufferings and the teachings. When those people participated in the next hoza, they should report how they practiced the assignment at home. When they were able to do it, she praised them generously. When they couldn’t practice well because of their deep-seated habits, she said “no problem” rather than scolding, and encouraged them so that they could practice once again.

When she sat listening to the participants in the hoza, and giving them the Dharma connection between the sufferings and the teachings by sharing the teachings of the Buddha and the Founder, more than anyone else she would incline the upper part of her body toward a speaker and her voice became stronger. With her whole body she expressed her will to truly liberate members. Whenever she saw members change themselves for the better through practice (and their family members also changing), she was so pleased as if it were her own situation. Whenever she saw members encountering hardship and suffering, she used to cry together with them, taking their problems as her own. She also taught them how to deal with such matters and embraced us with her great love.

I often wondered why she had such strong energy in her small body. Looking back, I can see that her energy came from her strong belief that anyone will be liberated without fail, when he or she learns and practices the teachings of the Lotus Sutra.

Rev. Lee is like a grandmother to me. But I think of Rev. Lee’s daughter, Rev. Hang-ja Lee, the current minister of the Dharma center, as my older sister, so it may seem contradictory for me to think of Rev. Lee as a grandmother. From my childhood, however, my father and mother yearned for Rev. Lee and used to say that she was like their mother. Rev. Lee also treated my parents as her own children. I grew up while seeing their relationships, and I naturally thought that I’m a granddaughter of Rev. Lee. Since my childhood, she always accepted all of me, believed in me, and encouraged me. It was before I went to Japan to study that I sometimes stayed at the Dharma center because I loved Rissho Kosei-kai. Whenever I spent a night with both of them at the Dharma center, Rev. Boksoon Lee always cooked Japanese food in Korean style or Korean food in Japanese style. She was really a loving grandmother.

When she came to Japan, she invited me to her accommodations, and I stayed several nights at her room. Because I was living alone in Japan to study, she warmly accepted me so that I would not feel lonely. She often took me to a noodle shop near the former site of Kosei Hospital, one of Rissho Kosei-kai’s facilities in Tokyo, which recently moved to a new location. She treated me to udon noodles topped with shrimp tempura. She always took me to the same shop and treated me with the same menu. But at the time I didn’t imagine that this would become such a fond memory.

When I saw Rev. Lee lying in bed in a Korean hospital, I remembered that she had been hospitalized in Kosei Hospital before. Japanese hospitals provide complete nursing care, so even a patient’s family members are not allowed to see the patient, except during visiting hours. Wishing to stay with her as long as I could, I always ran to see her in the hospital after school. When I entered her hospital room, I found her in bed, reading books and periodicals related to Rissho Kosei-kai. She welcomed me brightly, although her physical condition was not good because of surgery and treatment. When I talked about my school and dormitory life, she happily listened to me. A patient in the same room asked her whether I was her daughter, and she said “yes” with a smile. I was really happy to hear that.

During the time she was about to leave the hospital, she often sat straight up in bed listening to other patients’ worries, giving advice to them. She was very considerate of others and expressed her appreciation to them anytime and anywhere. Her warm heart and attitude, like those of the Buddha, opened the door to people’s hearts. She shared the teachings of the Buddha and the Founder even during her stay in hospital.

When she stayed in a Korean hospital, she was considerate of the visitors, encouraged them, and expressed her appreciation to them. She was not selfish and didn’t complain of her pain or suffering at all. She accepted everything with a peaceful mind. Her attitude was unspeakably wonderful.

She always said that she felt grateful for everything and I thought that she accepted even her last moment with gratitude. I was also deeply moved with Rev. Hang-ja Lee’s attitude to care for her mother. During the daytime she gave consideration to members at the Dharma center and she sat by her mother’s bed all night in the hospital. In the morning, her younger sister, Ms. Jimi Lee, took over caring from her, and Rev. Hang-ja Lee went back to the Dharma center. Because she continued such a life for a long time, she must have reached the limits of her physical strength, but she used to say that she was grateful that she was able to stay close to and care for her mother. I think it was severe for her to see her mother getting progressively weaker. But she continuously performed her duty as a daughter with gratitude, and carried out her assignment as minister. I saw Rev. Boksoon’s image in her daughter’s attitude.

While seeing them, I asked myself, “Can I become this kind of person?” It is very difficult for me, but I think it is very wonderful that I have the potential to become a person like them. I think many people may consider the same thing. In this way, Rev. Boksoon Lee left a lot of things for us.

What she taught us in particular was gratitude and love, the strength of those who have religious faith, and the message that we can definitely become happy if we believe in and diligently practice the teachings of the Buddha and the Founder.

Just being in the same space with and gazing at Rev. Lee made us feel more confident.

Rev. Lee’s flesh will perish from this world soon and we can’t express our feelings of loss in words. But I believe that she will live smilingly in our hearts and minds. While bearing the sadness of saying goodbye to her, I vow to be diligent in following the ways she had shown us step by step, and to practice diligently. I wholeheartedly hope that Rev. Lee will ascend to the pure land with the Buddha’s great benevolence and compassion.

Thank you very much, Rev. Lee. I love you. 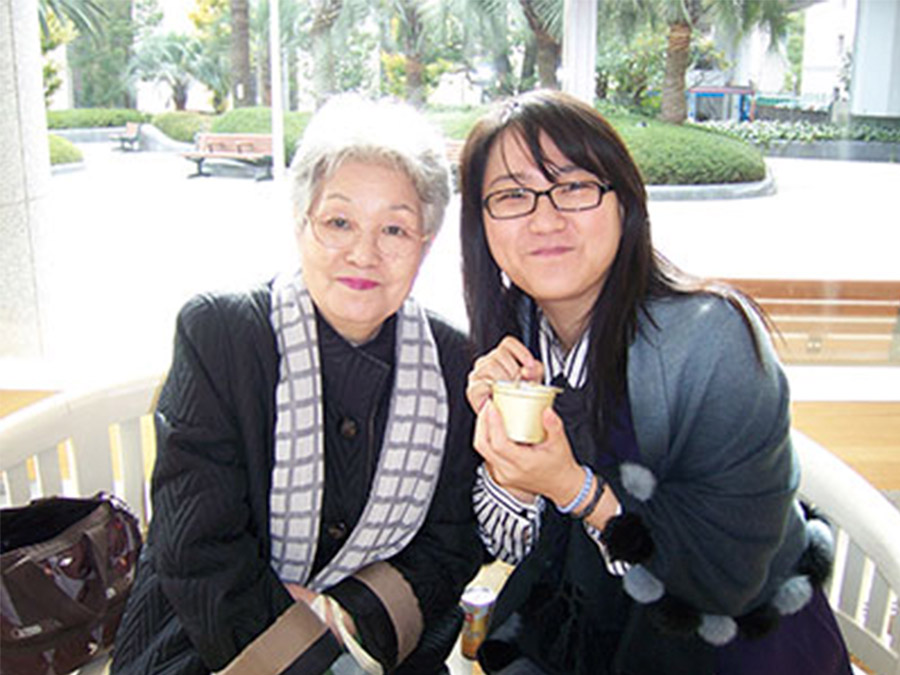