From Grudges to Gratitude

This testimony was delivered at the Sri Lanka Dharma Center during the ceremony of the Full Moon Poya Day on August 10, 2014. 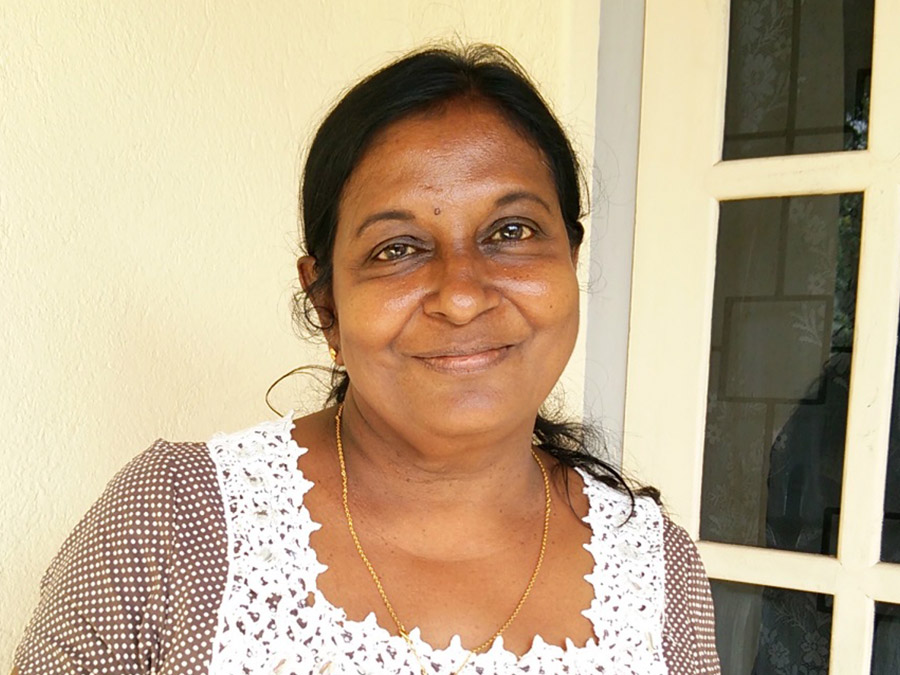 I was born into a Catholic family as the fifth of six brothers and sisters; I am fifty-eight years old now. I got married and was blessed with two children—my now thirty-nine-year-old daughter and thirty-year-old son.

I’m happy to say that my daughter now has two daughters of her own, ages fifteen and eight. Also, my son got married last year. Both my daughter and son live in the U.K. with their respective families. My husband and I have been separated for eleven years. He currently lives with another woman and has a child.

In 1974, when I was eighteen years old, I was suddenly abducted by a young man and taken away to his house. He was infamous for his bad deeds in the neighborhood. Three days later, fortunately, my brother found me and got me out. However, my father was very strict, and thought that I had gone to this young man’s house because I liked him, and he did not allow me to go back home.

I ended up marrying the man, but my father was completely against the marriage. So my married life basically started as soon as I got kicked out of the house.

My father was a banker. And he was very ashamed of my marriage, considering what the neighbors must have thought. He was always angry with me because I did not do as he told me to.

After I got married, I found out that my husband had been having loose relations with other women and had drunk alcohol and smoked marijuana for fourteen years. He had affairs with one woman after another. He constantly beat me, and afterwards I was often driven out of the house. Sometimes, he told me to get money from my father. At that time, we lived in my husband’s grandmother’s house, and she was the only one who had taken care of our everyday needs.

My husband had been out of work for a long time. Every time he sold my necklaces, rings, and other accessories to others, he spent the money for alcohol and marijuana. It was during those hard days that my daughter was born, in 1975. When I looked at my newborn daughter’s face, I felt as if all my sufferings and worries disappeared.

After my daughter’s birth, my parents started to support me, providing for my living and childcare expenses, without telling my husband. When my daughter was three months old, my mother talked with my father, and he forgave me. Thanks to this, I was invited to return to their house for the first time since I was married, and they allowed us to live with them. They doted on my daughter so much that they could not live without her. My father took care of us in this way.

However, even after we had started living in my parents’ house, my husband’s violence against me did not stop. His violence gradually became worse and worse. One day, I was beat so badly that I was injured. My father was shocked to see it, and kicked him out of the house.

Later, my husband told me he wanted a divorce,but I did not agree because of my daughter. My father found my husband a job in Saudi Arabia. He left the country to work there, but he did not keep at it for long.

My son was born in 1984, but two years later in 1986, my father, who had been supporting us, passed away. The following year, my mother, who was shocked by his death, also passed away, as if she were following after him. She deeply loved her husband. We had to go back to a hard life because of their deaths.

At the time, my elder sister, rather than my parents, began to support our family. She was married to a German and was living in Germany. Because her husband was enormously rich, he bought us the house in which we lived and supported us financially so that we could live our life.

My mother was very good at sewing, and she used to teach me how to sew. So when I was asked, I sewed saries and jackets and made custom-made clothes, and in this way I could earn some money for living expenses. At that time, my husband started a small business. But as his business was beginning to thrive, he spent the money on alcohol and other women.

Although my sister supported us, the income I made by sewing did not make our life easier. Our life was hard, but my daughter studied diligently and was able to get into the university. When she was twenty-three years old, I suggested to her that she should get married soon. This was because my husband tried to act indecently with her when he came home drunk. Fortunately, my daughter met and married a wonderful man.

And the worst day of my life finally came in March 2002, when my husband beat me for the last time.

It was Sunday. My son was supposed to take a university entrance exam the following day. He went to his friend’s house to study. My husband was completely drunk and was violent with me. His actions were too serious to be expressed in words. My daughter came around six in the evening and took me to Kalubowila Hospital. I ended up staying in the hospital.

Around eight at night, my son hurried to the hospital, and he was shocked when he saw me. Later I discovered that my son spent the night seeking my husband. But he could not find him, and I think it was probably for the better. Seeing my injury, my son flew into a rage and went everywhere looking for my husband overnight. If he had found his father, serious trouble between him and his father would have been the result. So I could not help but feel my son had been divinely protected.

People in the hospital reported my injuries to the police as an incident. The police searched for my husband, but they could not find him. From that day on, my husband did not return to our home. On the bed in the hospital, I thought that it might have been better if I had died as the result of my husband’s violent actions.

However, in spite of such troubles, I encouraged myself and strove to live for my son. Later, my elder brother, who was living in Italy, wanted to help me, and asked me to come to Italy too. He found a job for me so that I could live there. But I thought I could not leave my son alone in Sri Lanka, and after consulting with my brother, I had my son go to Italy instead of me.

In 2004, my daughter was working at the Ceylon Bank as a bank clerk. She decided to emigrate from Sri Lanka to the United Kingdom with her family. At that time, my son had been working in Italy for about a year. He once returned to Sri Lanka, and with his savings through his job and my daughter’s help, he was able to enter a university in the United Kingdom.

Encountering many hardships of life like these, and experiencing great sadness, I had lived my life. In 2008, my friend, Ms. Chandarakanti, brought me to Rissho Kosei-kai of Sri Lanka.

When entered the center, and seeing the spaceof the worship service with chairs positioned like those in a Catholic Church, I was able to comfortably blend in with the sangha and felt my heart lightened. 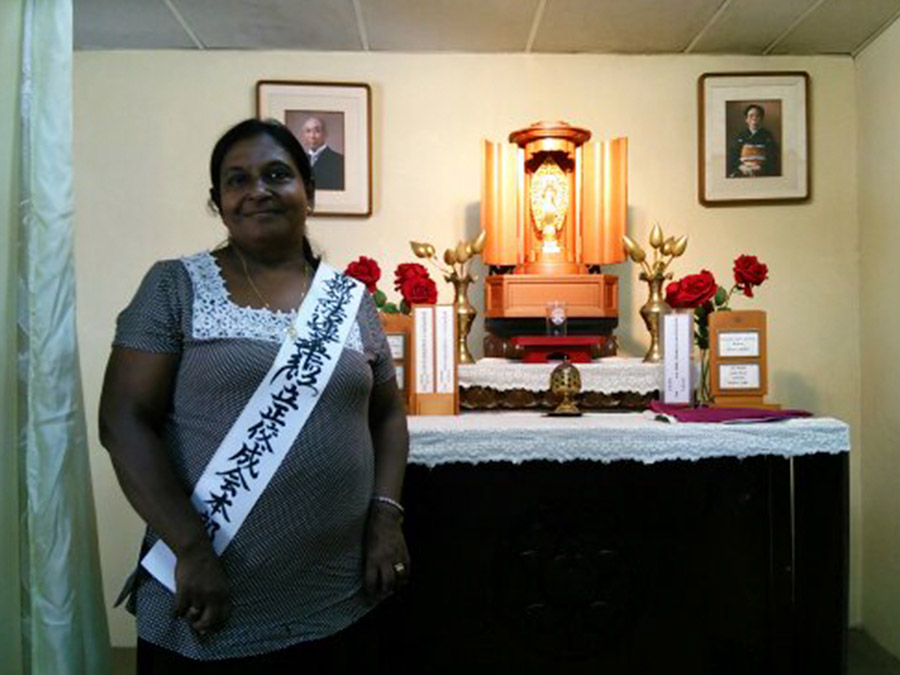 After giving her religious testimony, Ms. Manthri stands before the altar of the Sri Lanka Dharma Center.

He taught me many concepts, such as “The Buddha is anytime and anywhere,” “The Buddha protects and guides every one of us equally,” and “Both my hateful husband and my beloved children have equally the Buddha-nature.” As a Catholic, I had believed that the God is omnipresent, so I could naturally believe the teaching that the Buddha always exists, everywhere.

Rev. Yamamoto like my father is guiding me along the right way.

One day, Rev. Yamamoto gave me a guidance that I should strive not to have the mind of animosity toward my husband. He further said that thanks to my husband, I had been blessed with two precious children.

I had been bearing a grudge against my husband all this time, but after receiving Rev. Yamamoto’s guidance, I have been striving to practice so that I can have a mind of gratitude. I am striving to revere the Buddha in my husband’s mind, without bearing grudges against what he had done to me.

Thankfully, my daughter has now pardoned her father and accepted him, although she had hated him deeply.

To my husband, smoking marijuana and drinking alcohol were a daily routine, but my precious son neither smokes nor drinks any kinds of alcohol, including beer. My son got married last year. My two children are both leading happy lives.

Thanks to Rissho Kosei-kai, I am now enjoying happiness. I learned the importance of the gift of my life, although on the bed in the hospital I once thought that it might have been better if I had died.

Practicing guiding and caring for members, I now strive to listen attentively to what each member expresses from the depth of his or her mind and heart. Through such practice, I have guided twenty-three members as children in the teaching.

Now, in 2014, looking back on my past fifty-eight years of life, I now feel deep in my heart that mine has been a life of gratitude.

Now my children can support themselves, so I can spend my life peacefully with no worries. I would like to express my sincere gratitude to the Buddha, Founder Nikkyo Niwano and President Nichiko Niwano for guiding me to the way of happiness.

My fondest wish now is that I could worship the Buddha at the Great Sacred Hall of Rissho Kosei-kai headquarters in Japan, just once. 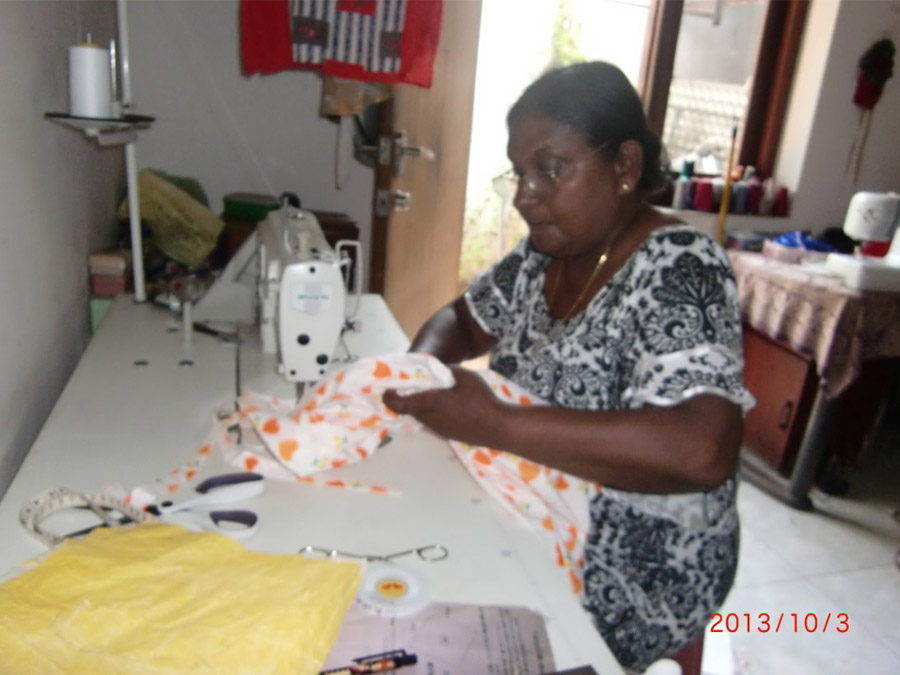