Being Fully Present With the Reality of Life

This Dharma Journey talk by Mr. David Rose was presented in the Great Sacred Hall on November 1, 2018, during the ceremony for the Uposatha Day. 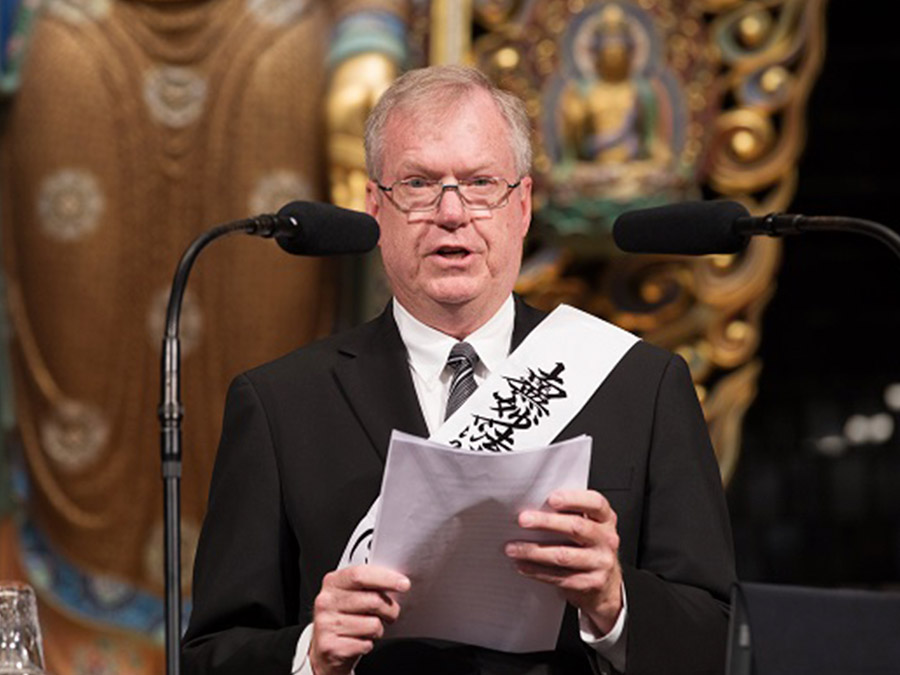 For the last decade I have been reluctant to write my Dharma Journey. I realize that sharing your Dharma Journey is an important part of RisshoKosei-kai, however expressing emotions was not something done easily in my family.

I was born in 1948 into an Air Force family (three years after the end of World War II). My father was a pilot and every few years we were off to a new duty station, usually around the United States, but also Misawa Air Base and Fuchu Air Station in Japan in the early 1960s and the US Embassy in Taiwan in 1970. The idea that everything was impermanent was ever present in a life of relocating every few years to new schools, new friends, and often new countries. During this time our family stability was provided by my mother who was always there waiting when I returned home from school.

As a youth I never doubted what I wanted to do in life. Immediately after high school I joined an Air Force ROTC program in college with the intent of following in my father’s footsteps. The only real disruption to the plan came when my father was killed in a plane crash shortly after I began the program. I deeply felt his loss but never questioned my goal of becoming a pilot.

After completing pilot training in 1972, I had a short marriage which ended in divorce, primarily due to growing apart during separations while in the military. It was painful at the time, but having moved from place to place during my childhood, letting go was something that came naturally. Looking back, it was also an opening to new things that never would have happened without this loss.

After a few years of focusing on my career in the Air Force, I met Jan who would become my wife, best friend, and spiritual partner for the next thirty-five years. We married in 1982 and moved from Air Force base to Air Force base, with both of us focused on continuing our education and careers.

I credit Jan with my growing interest in a spiritual life. I was not really searching but was always willing to try something new with her. She, on the other hand, was always looking for meaning in her life and explored many different avenues. Originally this search meant Christianity. Although we had both been raised in Christian homes it never really made sense to me, and when I tried it the second time I still did not feel any connection.

My interest in Buddhism started about the time I retired from the Air Force in 1992 and took a job as a pilot with Southwest Airlines. I remember reading a book on Zen Buddhism and thinking it made a lot of sense. After that I become what is known as a nightstand Buddhist. I would find an interesting Buddhist book and each evening would read passages until falling asleep. This eventually led to both Jan and I practicing Zen meditation on a regular basis with friends at our aikido dojo.

For the next twelve or thirteen years I read many books on Buddhism and practiced meditation sporadically but never really connected with a sangha. In the Spring of 2005, Jan, always the spiritual explorer, attended the Dharma Center of Oklahoma with some neighborhood friends. I tried it out shortly after, and both of us soon became members.

Two years after we joined Rissho Kosei-kai, in June of 2007, Jan was diagnosed with esophageal cancer. I had a chance to go online and look up this new disease I was unfamiliar with. The outlook was bleak. We spent the weekend in shock as we gradually grew accustomed to this new challenge in our lives. By Monday morning, with me following Jan’s lead, we both settled in to a place of determination to face whatever was to come.

During the summer Jan began radiation treatment, which resulted in a hospital stay (even swallowing water had become very painful) and chemotherapy, which left her exhausted and sick most of the time. I found myself focusing more and more on my practice for support.

In September of that year we traveled to Houston, Texas, and Jan checked in to the hospital at MD Anderson Cancer Center for a surgery to remove her esophagus and most of her stomach. The night before surgery I recall holding Jan’s hand and noticing that every time I would start to think or worry about the future it was as if she disappeared. I realized that to appreciate each moment required being fully present with it. It seems like such a simple thing but was a profound experience for me at the time.

The next day in the pre-op room waiting for her to go in for surgery we were both relaxed and calm, living in the present despite the major challenges ahead. I could clearly see the changes taking place in both of us due to our encounter with RisshoKosei-kai and the Lotus Sutra.

Because of complications, Jan’s surgery ended up lasting twelve hours and during this time, and over the next two weeks I had many more opportunities to observe the changes that were occurring because of our practice. The things we were going through were still difficult, but I was grateful for our ability to take each day as it came without dwelling on the past or constantly worrying about the future.

In the months and years to come Jan kept having good follow-up tests and we immersed ourselves in practice at the Dharma center.

With the encouragement of Rev. Kris Ladusau, minister of the Dharma Center of Oklahoma, Jan started an evening hoza group and together we began a meditation group that included both silent meditation and chanting parts of the Kyoten as an entry point for Americans who have only experienced Buddhism as mindfulness or silent meditation.

In 2009 I retired early from flying and was grateful for the additional time this gave me at home. Jan was still free from cancer but there were physical challenges from her previous surgery. Retirement also provided a great opportunity when Rev. Ladusau asked me to take over the Basic Buddhism class at the Dharma center. It was a wonderful experience that continues to this day. I was amazed at how much I had to learn about Buddhism and quickly discovered that explaining the teachings to others required a much deeper level of understanding.

Over the years leading up to 2013 I found that contemplation on our mortality was never far from my mind. That year, Jan’s difficulties increased and by Autumn she would spend another three weeks in the hospital for a second surgery. I recalled the quote by Shantideva that “All the suffering in the world comes from seeking pleasure for oneself. All the happiness in the world comes from seeking pleasure for others.” I found this to be true in my own situation and could always find peace of mind when I was able to let go of my own self-interests and focus on helping Jan.

In 2015 Jan’s cancer returned and was not curable. She knew it was back before her doctor did, and by the time it was diagnosed she was in so much pain I was not sure she would survive long enough to begin a new series of chemotherapy. I realized it was easy to read about the teachings of the Buddha but seeing and practicing them while experiencing daily life was much more challenging. Being mindful each day for the next year was a gift, sharing both sorrow and laughter, even in the final two weeks of her life spent at home surrounded by family.

I cannot imagine going through that final year of Jan’s life, or the years since, without this practice for support and equanimity. Through the pain of it all I believe both of us took comfort in helping each other through the daily hardships. We continued to take each day as it came but recognized on a deep level that our time together was coming to an end.

The days, weeks, and months following Jan’s death were most difficult when I was reminded by the small things. The place on the drive home from the Dharma center at night where I would call to let her know I was on the way home. Arriving home at night to a dark, empty house. Stopping at the grocery store and calling to see if there was anything she needed. The loss of someone to share in the ups and downs of life.

In hindsight I realize that losing your life, or the life of someone very dear to you, can only be truly understood through experience. In his book Cultivating the Buddhist Heart, President NichikoNiwano says, “The only way to overcome death, the greatest suffering that afflicts human beings, is to recognize the law of transience. Gazing unflinchingly at death, let us give thanks for the life we have here and now.”

I first read that quote years ago and at the time didn’t fully grasp its meaning. Only after experiencing the death of my wife was I able to begin to see that our suffering was not some unusual event in our life to be avoided. Instead it is the very nature of life, and a normal event that we can embrace and use to transform ourselves and see the joy around us every day, never losing sight of how precious but limited our time is.

Founder Nikkyo Niwano once said that enlightenment is in the encounter. For me this is the perfect way to look at the world. Whether at the Dharma center or the grocery store, every day is another opportunity for new encounters, but only if I am present and aware of them.

I am profoundly grateful to my parents for this life I have been given. I am also thankful for my family, friends, and the many people who have served as my teachers, often without the knowledge they were doing so.

I would also like to thank Reverends Kris Ladusauand Yasuko Hildebrand for their support and encouragement over the years. I would not be standing here without it.

Finally, I would like to express gratitude for my assignment as Head of Education for the Dharma Center of Oklahoma. It is helping me repay the many gifts I have received over the years, through developing and teaching classes, preparing course materials, and both training and mentoring a new generation of leaders. It is helping me continue a vow I made years ago which is best expressed in chapter 16 of the Lotus Sutra.

Ever making this my thought:

“How can I make living beings

Obtain entry into the unsurpassable Way

And quickly accomplish embodiment as buddhas?” 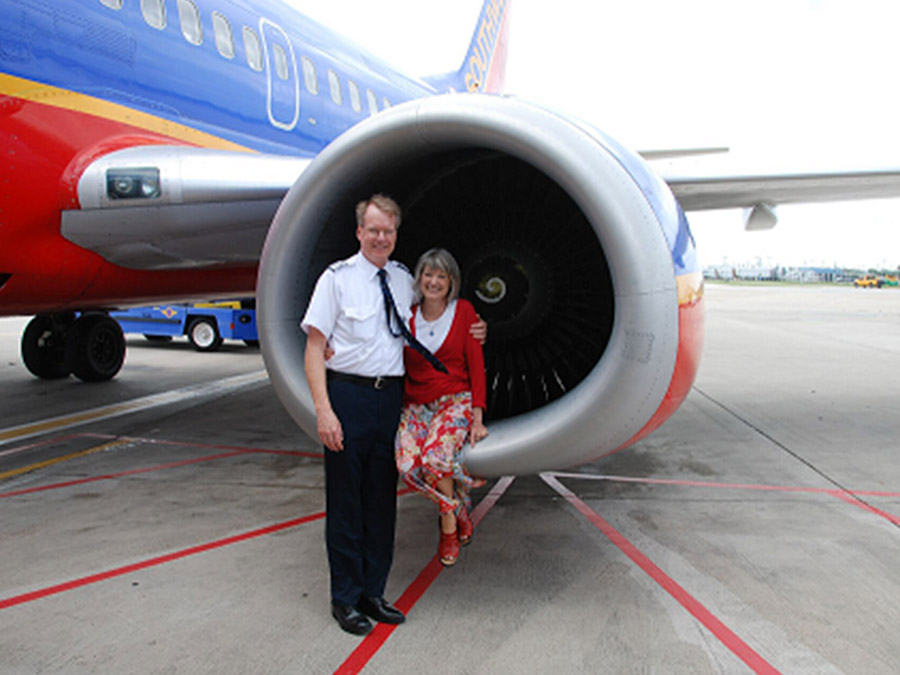 Dave and Jan Rose after his final flight at Southwest Airlines.