This Dharma Sharing (Spiritual Journey) was presented
at the ceremony for Founder’s memorial day, held at the Great Sacred Hall on March 4, 2017. 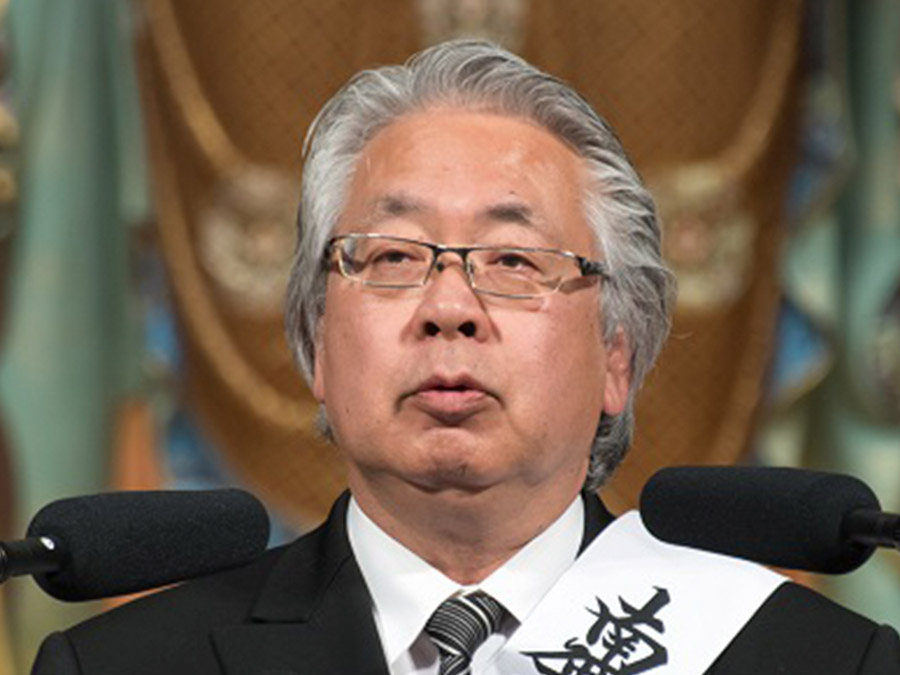 Good morning, everyone. Thank you very much for giving me this opportunity to share my Dharma experience on this meaningful day.

Last year in his first Dharma talk President Niwano explained about the term onshu, which means “to review past events.” This year, for his new year’s guidance he referred to “the preciousness of life and our gratitude to it.” In that guidance of Kosei Shimbunnewspaper dated January 1, 2017, the President says, “It is precisely because they have bitter and sorrowful memories that they can understand the suffering of others and be considerate.” My heart and soul was shaken when I read that, because it reminded me of my father and Mr. Minami, who I met in boyhood, then a staff member who was assigned to the Kanagawa area from the headquarters’ youth division.

In my childhood I was completely overwhelmed with an inferiority complex and overall gloomy character. My family was poor and my parents always had quarrels. My father, an electric welder, had a short temper. He often slapped my mother, me, and my younger brother. I kept hating him as far back in the past as I can remember. I always thought over four desires: killing my father, leaving home, setting my house afire, and killing myself.

When I was two years old, my father’s colleague named Ota guided my parents to the teaching of Rissho Kosei-kai. Even though my parents became members, they continued quarrelling with each other. But my mother kept paying a visit to the Dharma Center every day. I still vaguely remember that she took me to the center.

When I was a fifth grade of the elementary school, my father forced me to participate in a Dharma training session for junior high school students at the Yokosuka Dharma Center. As I could not reject his order, I joined it grudgingly. When I was chanting the mantra odaikoku repeatedly as I was told, Mr. Minami whispered me at my ear, “Thank you very much for your participation.” The words were so unexpected that I was greatly surprised and tears welled up in my eyes at the moment. I clung onto him and cried. I felt I was being treated as a human being for the first time in my life. I was very happy. Then I decided to follow him.

From that time, I came to accept assignments by the Dharma center in a positive manner, although I had always taken negative attitude. I played various roles at school as well as at the center, because I want Mr. Minami be happy and praise me. In this way I could take a step forward, but I was still frightened when my father was close to me. I underwent surgery for a duodenal ulcer at age twenty one. I thought that my hatred against my father appeared in the form of ulcer, but in fact, this unfortunate event was the working of the Buddha’s compassion. When the surgery was successful, my father rejoiced with a boyish grin. I had never seen such an expression on his face. Lying in bed in the hospital, I thought he was worried about me. When I really understood his feelings, my scary feeling toward him, which lasted for twenty years, gradually changed to affection. Then I reflected on the past, and realized it was my father that brought me an encounter with Mr. Minami. Now I believe that his words at the training session spiritually transformed me, only thanks to my father’s harshness. My father passed away at such an earlier age, just sixty four years. Just before the last moment, he gazed at me with full trust and asked me to take care of my mother. I answered him, “Leave it to me.”

When I was young, my mother was crying every evening. However, now I think she might be stronger than my father. She continued to visit Rissho Kosei-kai even though he shouted and slapped her. In tears she went back and forth to the Dharma center. When my mother shared her reminiscences, she told me, “At night my husband made me cry, and in the daytime a hoza facilitator made me cry” as her reminiscences. When I passed over the age of ten, peace and comfort was brought to my home little by little. My family became harmonious even though we had little money. I couldn’t describe how hard my mother worked for the Dharma practice until my family attained happiness.

In my twenties, I once asked my mother,“Why are you devoted to the faith so earnestly?” Then she answered, “I am afraid that something bad will happen as a lesson from the Buddha.” Precisely because I was then expecting to receive a little bit more reasonable and persuasive answer, I was disappointed. And what she said to me remained in my mind for a long time. When Itold this story to my wife in my fifties, she responded to me by saying, “Your mother might have been afraid that bad things would happen to you, not to her.” I was so much surprised and felt like I had been hit in the head. I remembered that, actually, she was once told in a hoza session that her first son would die young. At the moment I recognized that she had devoted her whole life to me, a deep sense of appreciation came out from the bottom of my heart. It was she who was most delighted to hear that I was assigned minister at the Brazil Dharma Center. It was also she who was so sad since she had to live separately from me. Every November, however, I was allowed to come back to Japan and I was able to spend almost two weeks. In her later years, she always told me,“I may not see you again next year.” I thought she was lonely. When I heard the news of her critical condition in August, 2009, thanks to President Niwano’s thoughtful arrangement, I was allowed to return to Japan temporarily. When I visited the hospital where she was being treated, she suddenly sat straight on the bed, saying, “Reverend, you’ve come to me.”My younger brother and his wife, who were taking care of her, were also so surprised. Since then, I could spend time with her for about one month. She passed away at the age of eighty-three, leaving her last words, “I am grateful. I’m grateful.” I saw her off with all my family members.

Thanks to my parents and Mr. Minami, I could have a variety of experiences. I felt resentment and fear, but also I was able to taste the feeling of being full of joy when I was praised. Those experiences are now my priceless treasures. Thank very much.

I would like to share another experience that I had when I was starting to find the strong points of the San Francisco Dharma Center. There is a sixteen-years-old girl, whom I will tentatively call Mary. When I first met her about four years ago, she always seemed in a bad mood. Whenever she visited the center for attending ceremonies orseminars, she always did her homework sitting at the back rows in the room. Honestly speaking, I had a bitter feeling against her. I could not see the buddha nature withinherself. But, on the other hand, she seemed to be similar to me at that age, and therefore I hoped that she could attain happiness. Communication and interaction with such a sensitive teenage girl is very difficult. So whenever I see her, I greeted her cheerfully from me, with best wishes. After a while, I found out how smart and clever she is, and she could speak both English and Japanese fluently, because her father is American and her mother is Japanese.

In the Dharma center, both Japanese and English are used at seminars, testimonies, and my Dharma talk. One day, I asked Mary, “Do you understand my English?” She answered, “Yes. Your talk is interesting.” I was so happy to hear this. For me, it was a twofold joy. The first joy was that my poor English was accepted and the second was that I could reach out to her heart and mind. I found that she always did her home works at the center but also listened to my talks.

Mary’s parents were divorced so she stayed at her father’s home on Thursdays and Fridays, and at her mother’ home on the other days. That’s why her mother took her to the center every Sunday. I thought she was a good girl. I thought her facial expression became gentle and bright since my perspective of her had changed.

One day, my wife said to me, “Mary was worried about you because you didn’t seem to be doing well today.” I was so moved. I thought I was always worried about her, but in reality she was watching over me. Now I was aware that she was an emissary from the Buddha to manifest my own buddha nature.When I realized this, I thanked to her from the bottom of my heart and mind. Further, it was not only her but all members in the Dharma Center who worried about me. How precious it was for me.

In the new year’s guidance President Niwano teaches us, “Becoming human beings who are capable of gratitude—don’t you think we can say that this is, after all, the aim of our faith?” And he also describes what we should practice in the concrete way by saying that“Something you particularly must not forget is to express your thankfulness and gratitude precisely in words.”

“Four Words for Happiness” are a set of watchwords for members of the San Francisco Dharma Center. They are: “Thank you,” “I’m sorry,” “I’m grateful,” and “It’s wonderful.” I always told members to speak these watchwords but actually, it was I who should have said them first.

Further, I wish to be a person who is able to accept everything, whether it be convenient and inconvenient to me, with gratitude. Like Mr. Minami, I also wish to be someone who can remind suffering people of a sense of gratitude, hope, peace, and forgiveness. I believe that these wishes are what my parentswanted me to attain.

Thanks to Founder Niwano I was liberated. Thanks to my wife, my younger brother and his wife, and the members, I’ve been walkingthe path leading to buddhahood this far.

Now people say that the world where we are living is challenged by global divisions.The Founder taught us the One Vehicle: “All sentient beings aboard the same vehicle are sustained to live by great life.” I believe that we have to communicate this teaching to people all over the world, and make it a common aspiration for humankind. I must realize that I was born to achieve this goal,and I wish to make a vow to devote myself to global Dharma dissemination. Thank you very much. 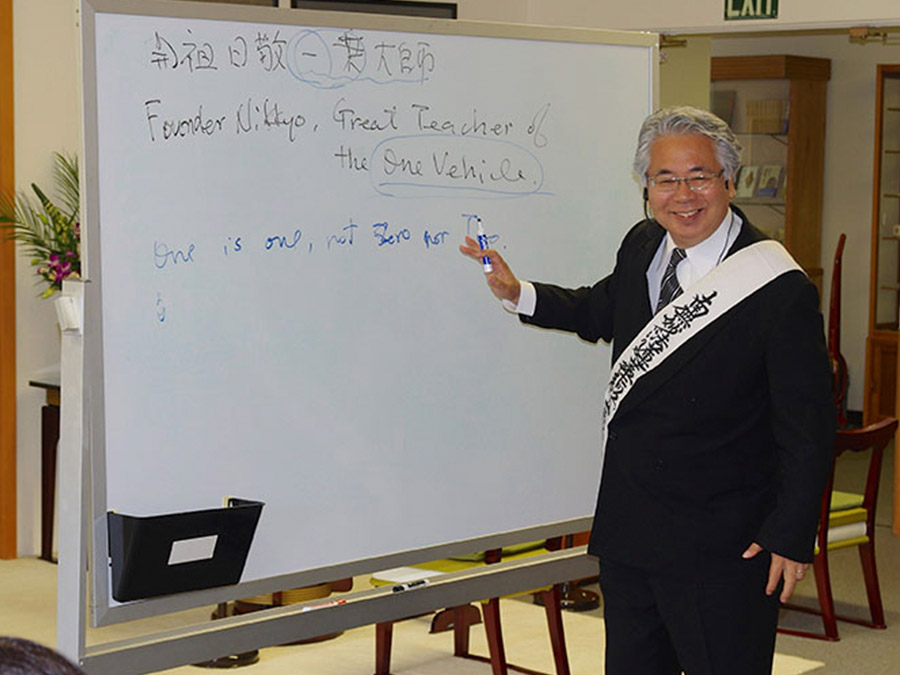