This testimony was delivered at a ceremony of our Sakhalin Hoza in Russia on August 8, 2016. 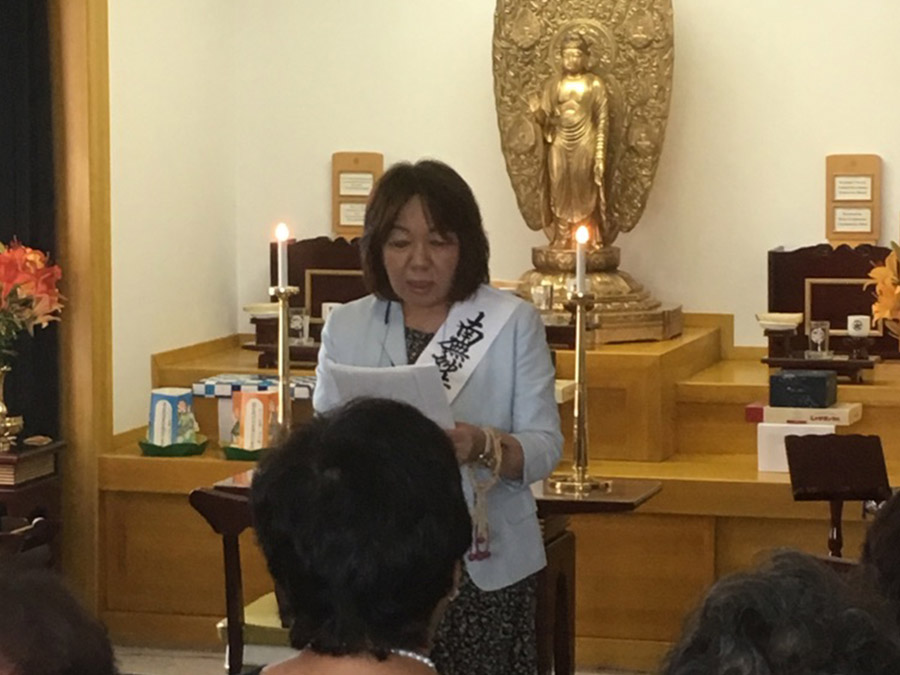 Mrs. Tsubouchi delivers her testimony at the Sakhalin Dharma Center.

I first came to Rissho Kosei-kai because I wished to hold a memorial service for my stillborn baby. I had been in a hospital for the delivery of my first child, when the nurse came to me to listen to the heartbeat of the fetus. Suddenly the atmosphere grew tense, and an oxygen mask was quickly put on my face. Following a doctor’s medical examination, I came back to the room and desperately prayed for the safety of my baby. My husband went to the doctor to hear the results of the medical examination and the doctor told him, “I’m sorry to say this, but your baby is dead.” The baby died of suffocation because the umbilical cord was twined around the baby’s neck. I could see all this in his face when he entered the room. We wept all night together.

Later, the ashes of our baby came to our home. Even after leaving the hospital, my breasts felt swollen with milk, although there was no baby to drink it. Each time my breasts began to lactate, I had to squeeze my breast milk, crying. I was filled with grief, and I spent days as if I were just a lifeless shell of a person.

My kind husband tenderly watched over me, since I could not recover from the loss of the baby. We spent many days in this state of disappointment, but we were eventually blessed with our first daughter in 1976. As I saw our new daughter growing strong and healthy, however, I felt more pity for the stillborn baby. Then I began to wonder whether there was something I could do for that baby.

My mother and elder brother introduced me to Rissho Kosei-kai. I visited Kosei-kai during the New Year of 1978 to buy a copy of Kyoten: Sutra Readings so that I could hold a memorial service for the baby, and I encountered the teaching of Kosei-kai. Then I started to chant the sutra every morning and evening for the repose of the baby’s soul. Then I gradually was able to feel ease and my daily life began to be fulfilled. My husband said, “Human life will be either happy or unhappy depending on one’s mental attitude. This teaching is wonderful,” and he began to join the activities of the Youth Group. I also began to visit the Dharma center and was assigned the role of an area leader.

My daughter suffered from inflammation of the middle ear when she was three years old. I talked about her in the hoza (Dharma circle) and asked for a Dharma guidance from the hoza facilitator. The facilitator said to me, “It is because you cannot listen to others’ opinions. Your daughter is being protected by the Buddha.” I could not understand why she was being protected by the Buddha, despite the fact that she was sick. Even though I was not quite satisfied with the facilitator’s guidance, I went to a neighborhood group leader’s house to do the tedori (visiting members’ home to share the teaching) after the end of the hoza. Without any particular reason, I visited her house, but when I saw her, her face was very pale.

She said to me, “Mrs. Tsubouchi, I had an abortion today.” Her husband said to her, “One child is enough.” This was due to economic reasons. I talked to her about my past painful experience of the stillbirth. After that, I had a wish that she would give birth if she were to become pregnant next time, so I visited her every day. Then I talked about the Buddha’s teachings. Little by little she came to understand the Buddha’s heart and mind. She joined a voluntary service in the Dharma center and guided her friends to the Way. She was able to have a memorial service for the unborn child as the feeling of her remorse and for the repose of the child’s soul. Later she was blessed with a son. She said to me, “Thank to Mrs. Tsubouchi, my son was born.” I was so pleased that even someone like me could be useful to people. I found that my daughter had completely recovered from the inflammation of the middle ear and that it would not recur anymore. Through this event, I realized that because I could not listen to others’ words respectfully, I made my daughter feel pain. I have the kind of personality that clearly determines whether something is right or wrong. I don’t forgive an unreasonable thing, and I express my opinion in a straightforward way. Now I can imagine how many times people around me might have felt uneasy, seeing the kind of person I am. Finally I could understand the meaning of the hoza facilitator’s words, “Everything is the manifestation of your heart and mind.” The experience of the tedori activity for the neighborhood group leader gave me the motivation to learn and practice the teachings more deeply than before. Then I strongly felt a desire to be helpful to others. In 1999, I was assigned the role of chapter leader. On the inauguration day, the minister said to me, “It’ll be nice to acquire good merits through this role, and to be diligent in your practice, so that the members naturally yearn for and respect you as a chapter leader.”

However, the role of a chapter leader made me busy every day, and I wasn’t able to feel at ease. When a member came to me for Dharma guidance, I talked with them, seriously wishing for their happiness, but many of them opposed me, feeling like I was giving them a lecture. I felt that no one understood me even though I made every effort, so I was filled with loneliness. Six months after I became a chapter leader, the minister said to me, “You are sustained to live by the Buddha, and are fulfilling your role out of your earnest desire. You should take it easy more often.” I noticed that by having my own narrow ideas of how a chapter leader should be, I was overwhelming myself mentally. Since then, I have been practicing the teachings, wishing for good relationships with the members while maintaining an open mind.

My area of responsibility area was changed to the Shiroishi, the first chapter, three years ago. One day, I had a phone call from an unknown lady when I was performing voluntary service at the Dharma center. She didn’t say her name, but claimed, “It makes me uncomfortable that my seventy-year-old mother has gone to Rissho Kosei-kai from the early morning hours, leaving me alone at home. Something is wrong with Kosei-kai.” I sincerely listened to her. After the call, I discussed the complaint call with the members in the hoza and asked them whether anyone knew who the caller was. I couldn’t imagine her family was in my chapter. A member in the hoza told me that she must be a daughter of Mrs. A, a neighborhood group leader. Her daughter had mental illness and tried to make her mother act as she wished. And the daughter had gotten tattooed and needed to apply ointment. However, Mrs. A did not approve of her tattoo and she didn’t want to apply the ointment. And their relationship was getting worse. The members told me all about their relationship. Listening to the discussion, I felt the loneliness of Mrs. A’s daughter as well as the pain of Mrs. A, who is elderly. I began to see that her complaint call was the opportunity for the family’s liberation given by the Buddha. In the hoza, I told the members that I would like to help Mrs. A attain their liberation bringing together the chapter members’ efforts.

I immediately visited Mrs. A’s house along with the area leader to hold an annual memorial service. From that day on, Mrs. A made a vow to accept her daughter as she is as part of her morning and evening sutra recitation before her family altar. She also made a determination to accumulate good merits and began to practice the teaching along with the area leader. After a while, Mrs. A started to look better. The area leader told me that their relationship was getting better gradually. Recently, I heard from the area leader that Mrs. A said, “I am grateful to be able to apply ointment to my daughter’s body.” Hearing her report, I shared the joy of the change of Mrs. A’s mind.

Since I was assigned the role of chapter leader, I have accepted each encounter with a member, and every event, as being a good opportunity to open my buddha-nature. I am conscious of the fact that deep in my mind I have always had a wish to be helpful to others, and I think those encounters and events are what help me perform my mission as a chapter leader.

Like the area leader who stays close to Mrs. A, I wish that all members in my chapter would come in contact with other members as the cheerful, tender, and warmhearted sangha and cultivate the fields of their hearts and minds. I would like to be diligent in practice with a goal that every member will become a parent in the Dharma. 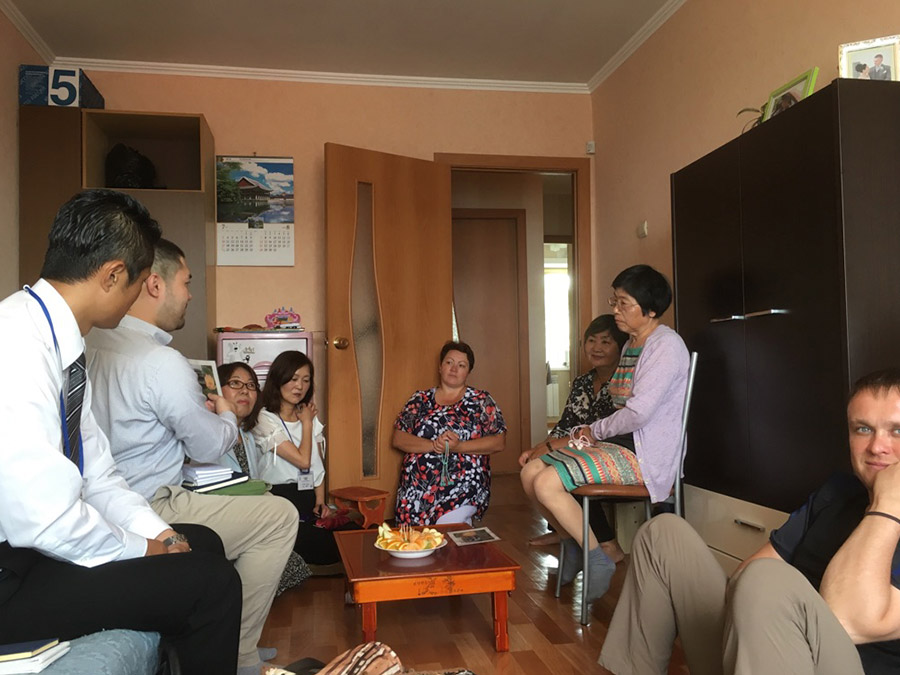 Walking to do the tedori activity with the Sakhalin members brought forth the strong.