This Dharma Sharing (Spiritual Journey) speech by Mr. Chung-Hou Chen was delivered
at the end of year candlelight service held at the Taipei Dharma Center on December 25, 2017. 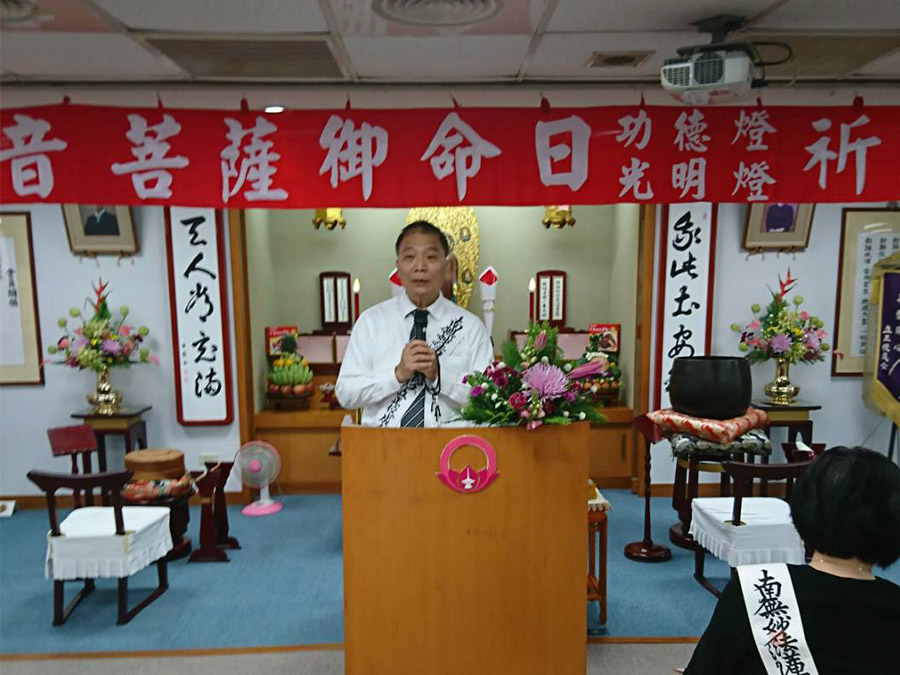 Thank you very much for giving me this opportunity to stand here to share my spiritual journey on this special day of the candle light service.

I was born on November 5, 1950 in the countryside of Pingtung, a small town in southern Taiwan. My parents were farmers and we were really poor. I am the eldest of the five children. My parents went to work before dawn and came home after sunset to raise and support us. They worked diligently without rest or complaint. As the oldest son in the family, I learned how to start a fire to cook rice in second grade and learned how to cook dishes in third grade so that I could lighten my parents’ burden and have them come home to prepared meals. As I grew older, I worked part time to complete my college degree.

After graduating from college, I started to work in a travel agency. In 1976, a classmate of mine introduced me to my current wife. We dated for two years and got married in 1978.We have two sons. Part of my job in a travel agency was leading groups on oversea tours. This meant all the responsibilities of educating our children fell completely on my wife’s shoulder. Through my work, I got the opportunity to meet Mr. Rui-Lien Chien, the founder of Taipei Dharma Center. At the time, Taipei Hoza, belonged to the Toyoda Dharma Center in Tokyo. Therefore, every time Taipei Hoza had their Dharma training with Toyoda Dharma Center, I was taking the group to Japan. During their training, I was really moved by how caring the members were and how thoroughly they incorporated the basic practices of faith: sutra recitation, guiding others to the faith (michibiki), supporting fellow members in the faith (tedori), attendinghoza sessions, and the study and practice of the Dharma into their daily lives. I realized that I also adore and revere the Buddha. In 1984, I was guided to the faith by Mr. Chienand became a member of Rissho Kosei-kai. Soon after that, Mr. Chien asked me to have the installation of the sokaimyo, or the comprehensive posthumous name for the ancestors from both husband and wife. After discussion with my wife and family, we declined because in Taiwanese culture, ancestors of the wife are not worshiped. Hence, I also stopped going to the Dharma center.

Maybe because I didn’t receive the sokaimyoinstallation at my home, I became self-centered, attached to my own ways of thinking, and could not see the true aspect of things at work, which often caused me to lose good work opportunities. In 1986, I left my job at the travel agency and started my own travel agency. But our business fluctuated and had difficulty maintaining a stable income. Even though we tried for more than ten years, our financial situation didn’t improve. Meanwhile, we had high expenses raising our sons, and my wife frequently got frustrated and upset at our financial situation.

My wife would say she married the wrong person. I couldn’t accept my wife’s anger and reflected on what I’ve done, but in my opinion I did the best I could. Therefore, I came back to Taipei Dharma Center to try to resolve my suffering. The Gohonzon and the warm smile of the Founder Niwano I admire became the support for my practice in the faith. One day, I received the guidance from Rev. Miao-Fang Chien, the minister of the Taipei Dharma Center, who said, “As all things in this universe are originally impermanent, if you take refuge in the absolute existence of the Buddha, Dharma, and the Sangha and keep a firm faith, your life will improve without fail.” I put the guidance into practice and spoke and act with the family with smile and kind words. I also listened to what my family had in mind. As I changed myself and put those practices in my daily life, my wife began to complain less than before and it eased the tension in my mind as well.

One day, our minister Rev. Chien asked me to be the chairman of the Taipei Dharma Center. I was happy but concerned at the same time. I was concerned whether I deserved to take on the duty as the chairman especially because I also have to work. I was really happy that I was given an opportunity to be closer to the Buddha and wondered what message Buddha was sending me through this opportunity.

After I became the chairman, I went to the Dharma center almost every morning to participate in the sutra recitation and a hozasession. In the afternoon, I would go back to the office to do my work. Before long, I started to see the progress at work. When the business became busier, the workload for my wife got heavier, especially as she also had to cover some of my work. She was overwhelmed with the heavy workload and started to complain. I could only quietly accept the complaint. Nevertheless, I continued going to the Dharma Center in the morning and working longer hours in the afternoon. I told my wife to not worry because the Buddha would look after us if we continued the practice. During this time, I was bestowed with the Gohonzon from the Taipei Dharma Center. Through the installation ceremony and the practice of paying respect to ancestors, my family and I had a deeper understanding of Rissho Kosei-kai’s teachingsnow and no longer had any apprehensiontoward installing the sokaimyo in the family Buddhist altar as well to have the spirits of ancestors of both paternal and maternal sides enshrined there.

As our business grew, the number of our clients increased. Most of the clients found us on their own, which included clients that hadn’t kept in touch. During the busy times, we also encountered some difficulties. For instance, we had a group of 256 people traveling to Hokkaido, Japan, and they requested to depart together on the same flight. However, according to the airline, they could only provide 232 seats because the flight was already fully booked. Themiraculous thing happened three weeks before departure. Twenty-four people cancelled the flight and that allowed our full group to depart as planned. All other obstacles were resolvedon their own, which made my wife and mefeel the inconceivable power watching over us. The change in our financial situation also changed my wife’s attitude toward the faith and she started to attend the Dharma center and listen to Rev. Chien’s Dharma guidance on Saturdays and Sundays. She also accepted the duty of preparing the omorimono, or fruits and vegetable offering to the Gohonzon for the ceremonies. Whenever she visits the Dharma center, she participates in the sutra recitation and hoza to share the joy and worries with other sangha members.

For a time after I accepted the position as the chairman of the Taipei Dharma Center, I was anxious because I knew it was an important job and I would wake up at around three o’clock every morning. Since I couldn’t sleep after that, I would read Buddhism for Todayby Founder Niwano in Chinese translation. I continued doing so for almost two months. It was stressful to my body and mind and I became too tired to continue. I wondered why I had to strain myself so much with the duty as the chairman and felt like giving up the position. However, when I was considering what kind of chairman I wanted to be, I became aware of the profound meaning of the Lotus Sutra, and my faith grew more steadfast. In 2016, I received the Gohonzon(an image of the Eternal Shakyamuni Buddha)from the headquarters under the guidance of Rev. Chien. My wife and I learned the Dharma, practiced the morning and evening sutra recitation every day, and did our duties at the Dharma center. We also devoted ourselves to supporting our fellow members in the sangha.

On October 21, 2017, Rev. Chien, the minster of Taipei Dharma Center, recommended me to receive a certification of Dharma Teacher at the Tokyo headquarters. Before departure, an emergency situation at work occurred relating to income tax declaration that required immediate handling. I was undecided whether I should stay in Taiwan to solve the problem or go to Japan for the Dharma Teacher certification ceremony. I went to ask Rev. Chien for her guidance. She told me as long as I kept an honest heart and attitude to accept everything as it is and held firm to the faith, the Buddha will arrange everything for me. She continued to encourage me to go to the headquarters to receive the certification. Meanwhile, inspired also by a passage in chapter 12 of the Lotus Sutra, “Devadatta,” which reads, “if [good sons and good daughters who believe and revere the Lotus Sutra] are born into the presence of buddhas, they will be born from lotus flowers,” I made up my mind to always live in accordance with the Buddha’s teachings no matter what hardship or troubles I may come across, and I decided to receive the Dharma Teacher certification. Through this experience I learned the importance of accepting everything as the Buddha’s compassionate arrangement and freeing myself from attachment. The tax-related problem of my company was also solved after I came back from Japan.

In my spiritual journey, I learned to view both happy situations and sad, disappointing situations as opportunities that the Buddha had arranged for me to grow. That was a valuable learning opportunity that I truly cherish. If anything disappointing may happen, I would no longer get angry or complain but accept it with the heart of gratitude, as I know now everything that comes into way is an expression of the Buddha’s compassion. I am truly blessed to be able to have this awareness today. I am not wealthy but I am grateful and satisfied.

Chapter 10 of the Lotus Sutra, “The Teachers of the Dharma,” includes the passage, “That man has adorned himself with the adornment of the Buddha.” As is described in this passage, I would like to be always gentle andkindhearted and improve further my thinking and behavior so that I could earn the trust of others and, together with people who I guided to the teachings, continue to learn the Threefold Lotus Sutra. Also, with the self-awareness as a Dharma Teacher, I will put my palms together and revere the buddha-nature inherent in all people and continue the basic practices of the Dharma to get connected with many more people and extend good relationships, so that, under the guidance of President Niwano, I could grow spirituallytogether with the fellow members of the sangha. 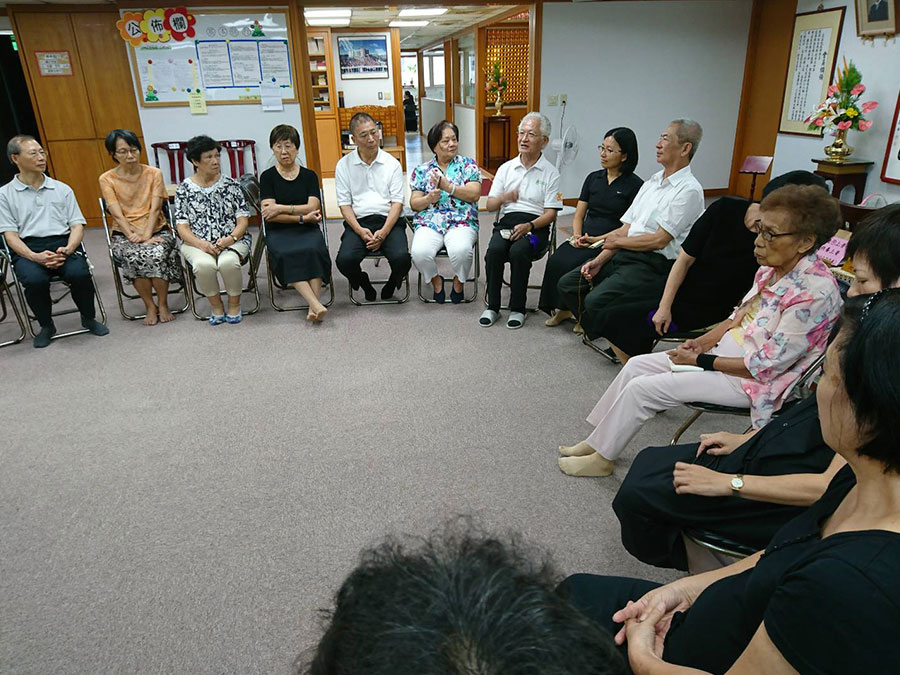