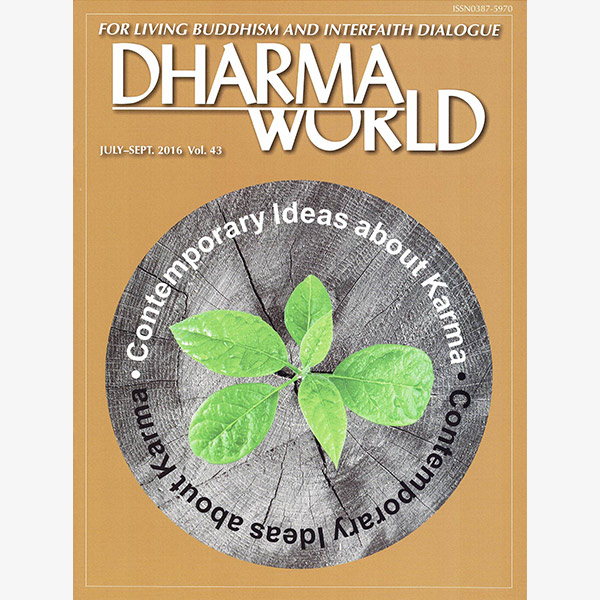 Merriam-Webster’s Collegiate Dictionary defines karma as “the force generated by a person’s actions held in Hinduism and Buddhism to perpetuate transmigration and in its ethical consequences to determine the nature of the person’s next existence.” Karma is a fundamental Buddhist concept. Buddhists hold that wholesome deeds and intentions create beneficial karma, and unwholesome deeds and intentions create harmful karma.

The consequences of a person’s deeds might not be revealed in his or her present life, but only in subsequent lives. This is why some people might not seem to “reap what they sow.”

It is questionable whether all Buddhists have subscribed to the doctrines of rebirth and karma as elaborated above. Over time, ways of mitigating or reversing the effects of karma appeared in Buddhist traditions, and many contemporary Buddhists believe in transmigration but do not think their everyday behavior will affect their future lives. Some may even reject karma and rebirth as fatalistic justifications for prejudice, such as sexual discrimination, or for such misfortunes as poverty, physical disability, and natural disasters.

What is karma? How do people today understand it? We may need to rethink karma, an important Buddhist concept that has often been misinterpreted and exploited for various reasons, so that Buddhism will continue to be a spiritual guide for people’s thoughts and deeds.

Discovering the Lotus on This Shore: A Reading of Kenji Miyazawa’s “Okhotsk Elegy” (Jon Holt)
The Actual Refugee Crisis in Europe (Ignacio Marqués)
Abiding by the Laws of Interdependence (The 33rd Niwano Peace Prize Acceptance Address by Dishani Jayaweera, Cofounder of the Centre for Peace Building and Reconciliation)
The Asian Conference of Religions for Peace (Nikkyo Niwano)
THE THREEFOLD LOTUS SUTRA: A MODERN COMMENTARY
The Sutra of the Lotus Flower of the Wonderful Law
Chapter 25: The All-Sidedness of the Bodhisattva Regarder of the Cries of the World (4)

Published semiannually, Dharma World is a magazine that presents Buddhism as a practical living religion and promotes interreligious dialogue for world peace. It espouses views that emphasise the dignity of life, seeks to rediscover our inner nature and bring our lives more in accord with it, and investigates causes of human suffering. It tries to show how religious principles help solve problems in daily life and how the least application of such principles has wholesome effects on the world around us. It seeks to demonstrate truths that are fundamental to all religions, truths on which all people can act.